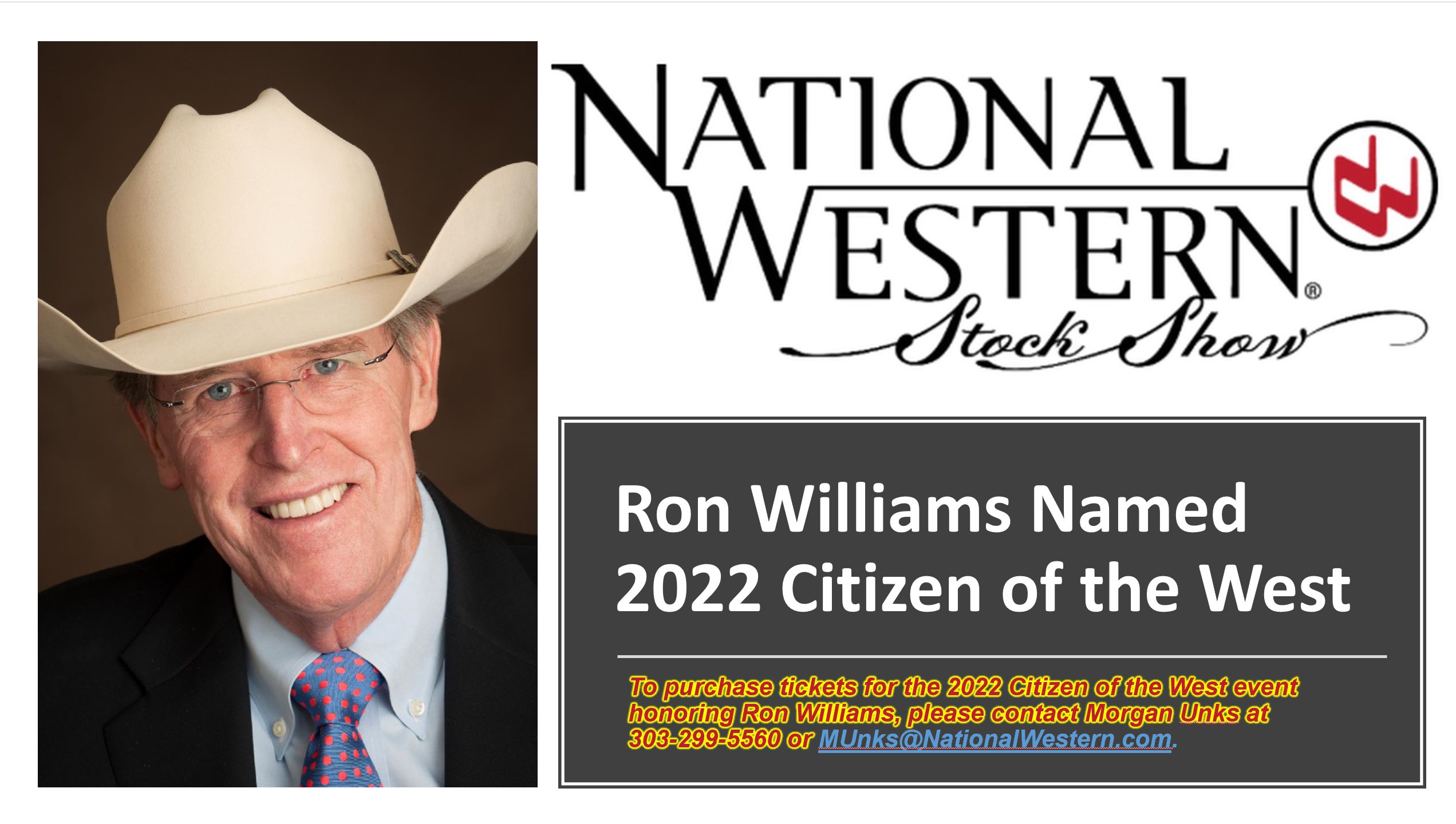 DENVER, CO – The National Western Stock Show is proud to announce Ron Williams as the 2022 Citizen of the West. This prestigious annual award recognizes those who embody Western pioneers’ spirit and determination and perpetuate their agricultural heritage and ideals. A committee of community leaders selects recipients.

Mr. Williams has been selected for this esteemed honor. Still, in light of the 2021 National Western Stock Show postponement, he will receive the award at a dinner in January 2022 at the National Western Events Center. Proceeds from the event support 100 scholarships the National Western Scholarship Trust awards annually to students that attend colleges and universities in Colorado and Wyoming and major in Agricultural Science, Rural Medicine or Veterinary Medicine.

Ron Williams is a respected leader in business, education, civic, and philanthropic communities. He has made many contributions to the community through his long-standing service and financial commitments. Mr. Williams’ contributions are indelible across Colorado and to the future of the National Western Stock Show.

Ron Williams grew up in a small town in Nebraska, with a graduating high school class of 10. He received his undergraduate degree from Kearney State College, Kearney, Nebraska, and his master’s degree from the University of Nebraska, Lincoln, Nebraska. Upon graduation, he moved to Denver. In 1977, he joined an oil company in which he later became an owner. He is the former President and Chief Executive Officer of the Gary-Williams Company. The company’s community investment division, The Piton Foundation, supported non-profits, including the Colorado Children’s Campaign, Denver Preschool Program, Urban Land Conservancy, and many others. This is where Mr. Williams first became involved in and found a passion for philanthropy.

Mr. Williams co-chaired the capital campaign to raise private funds for a new state-of-the-art Children’s Hospital at the Fitzsimons Campus in Denver. He and his committee successfully raised $250 million to build the new hospital.

Williams has also served on the Board of Directors for the Denver Public Schools Foundation for a decade. He is credited with shaping and influencing education in Denver. He actively raised more than $10 million for the foundation.

“Ron is a very competitive person, and everything he does, he wants to do as well as it can be done,” said Skip Miller, a long-time golfing and business colleague. Miller added, “It’s demonstrated in the results he brings about.”

Ron has been instrumental in the transition of the National Western Center into a 250-acre year-round educational, research, commerce, and entertainment campus, the impact of which will extend far beyond the annual National Western Stock Show.

Mr. Williams was inducted into the Colorado Business Hall of Fame in 2016, is a lifetime member and past Chairman of the Board of Directors of Children’s Hospital Colorado, and a member of the board of the hospital’s foundation. He continues his philanthropic involvement by serving on the University of Colorado Hospital board and is a member of the Colorado Forum.

To say Ron Williams has dedicated his life to helping to create a better, stronger Colorado would be an understatement. He is truly an outstanding member of this community and the 2022 Citizen of the West honoree.

Though dedicated to his career and community engagement, Ron has also devoted his life to his wife, Cille, and their daughter and two sons. He also enjoys spending time with his seven grandchildren in his spare time.

To purchase tickets for the 2022 Citizen of the West event honoring Ron Williams, please contact Morgan Unks at 303-299-5560 or MUnks@NationalWestern.com.

About the National Western Stock Show

Established in 1906, the National Western Stock Show is a 501(c)(3) charitable organization that provides college and graduate level scholarships in agricultural science, business and rural medicine. It is our mission to serve producers and consumers throughout the world by being the premier annual livestock show and center for year-round events. The 16-day show in January also serves as an entertainment arena, hosting one of the world’s richest regular season professional rodeos, world-class horse shows, family, educational events and Colorado’s largest western trade show. For more information, visit nationalwestern.com.