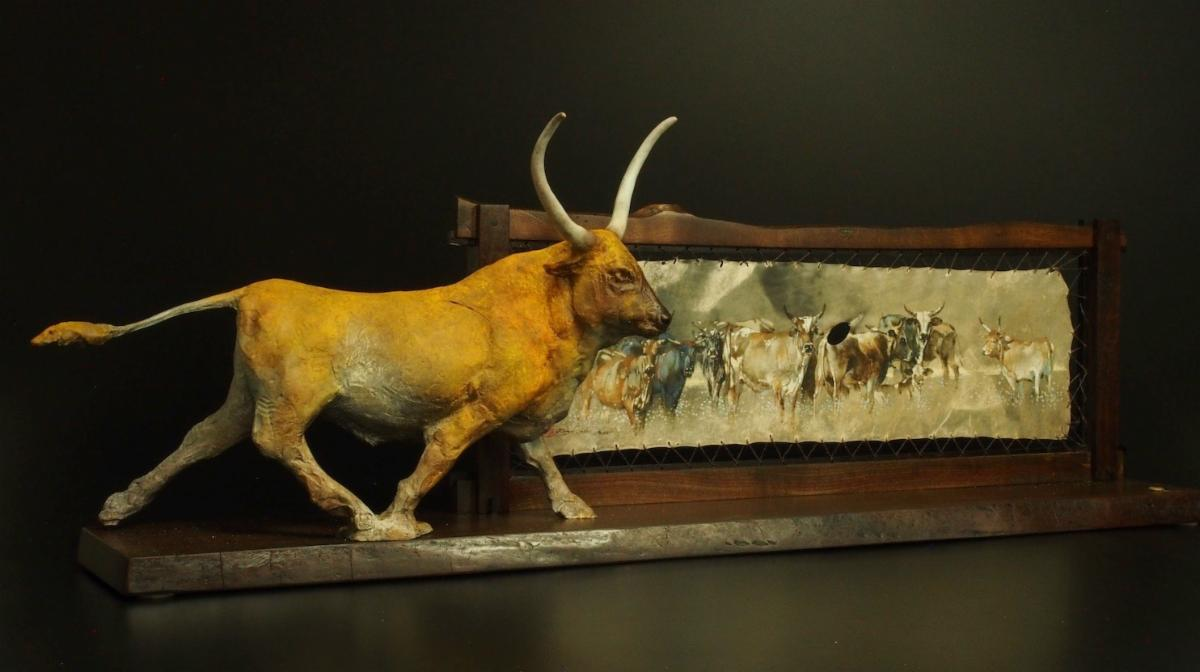 DENVER, CO.- Dan Chen has been named the 2023 Featured Artist of the 30th Annual Coors Western Art Exhibit & Sale. Chen’s sculpture, Gaze and Graze, has been selected for the National Western’s permanent art collection. This signature work will also be available for sale as a poster during the 2023 Coors Western Art Exhibit at the National Western Stock Show, January 7-22, 2023. This sculpture personifies the contemporary imagery of the West which the Coors Western Art Exhibit & Sale has become known for. Coors Western Art Exhibit & Sale is one of the nation’s most attended western art exhibitions and is one of the largest fundraisers for the National Western Scholarship Trust, the philanthropic pillar of Colorado’s National Western Stock Show.
In the genre of Western art, Dan Chen is an explorer of subject and medium. Dan Chen was born in China, in the province of Canton. Dan’s love affair with art began when at age three, he peered above the tabletop in breathless fascination at the magic which seemed to flow from his father’s paint brush. When Dan was 15, he was introduced to master artists who familiarized with him varied painting techniques and helped hone his artistic observation skills. For over five years Dan worked under the critical eyes of his mentors before finally being allowed to display his art at a state show where he won the first of many awards.

Dan immigrated with his parents to the United States in 1984. There, Dan enrolled at San Francisco City College and studied graphic design and illustration at the Academy of Art University. After three years of schooling, Dan started his own business, creating unusual ceramic art, which quickly became distributed in prestigious stores. Dan found that the demands of running such a large enterprise not only took too much time from his family but did not allow him to explore the entire spectrum of his skills. Determined to start over, he simply walked away from his business and began a new life in Eugene, Oregon.

Since that time, Dan’s professional career has begun focusing full-time on nature and wildlife art in both paintings and sculptures. A solid foundation in many art forms has allowed him to perfect his own particular methods. Dan’s experience with the Eastern and Western disciplines of art has provided the inspiration for the extremely pleasing and dramatic style he has developed. The art of Dan Chen is a marriage of the finest qualities of eastern and western art style and technique.

The 2023 Coors Western Art Exhibit & Sale opens Tuesday evening, January 3, 2023, with the Red Carpet Gala Reception. The exhibit features 75 contemporary realists from North America and Europe who capture the western way of life. Last year over 600 people attended the Red Carpet Gala Reception on opening night. The exhibition is open to the public during the National Western Stock Show, January 7-22, 2023, and hosted over 30,000 viewers during the National Western Stock Show. Also look for exciting emerging artists at the Young Guns Reception on Thursday, December 8, 2022 – an art opening and social event for patrons 40 and under.

The National Western Scholarship Trust was formed in 1983 to provide scholarships to students studying agriculture, rural medicine, and veterinary sciences. Since then, the Trust has grown to award 100 scholarships annually, ranging from $2,500 to $15,000 per student.