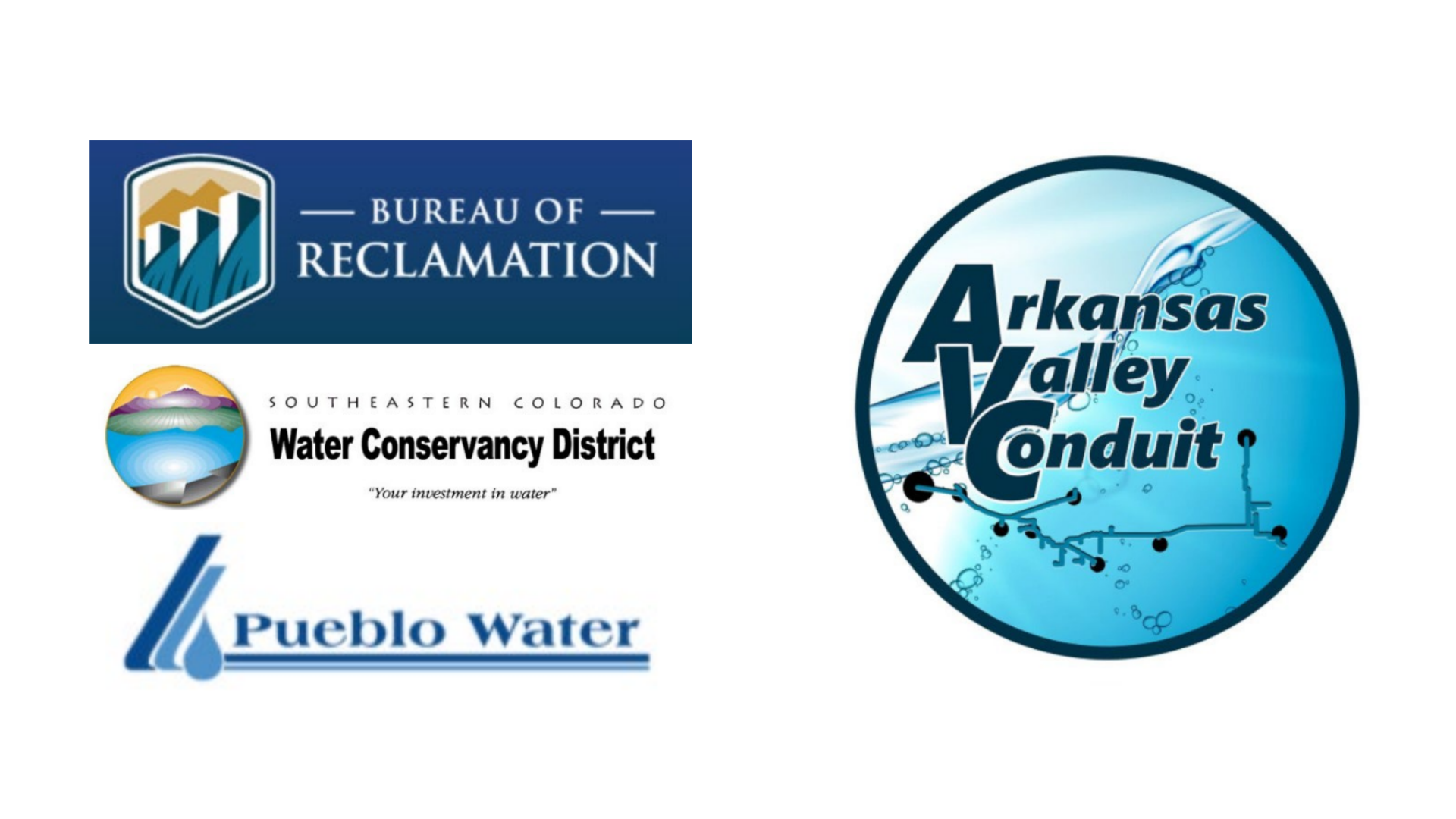 A three-party contract allowing for the Arkansas Valley Conduit to deliver clean drinking water to 50,000 people in 39 communities east of Pueblo was signed by the Bureau of Reclamation on March 18, 2022, following approval by the Southeastern Colorado Water Conservancy District Board and the Pueblo Board of Water Works (Pueblo Water). The contract was drafted after negotiations that began in November 2021.

“This contract signing marks one of the most significant milestones to date towards making the AVC a reality and bringing clean water to communities that desperately need it. It advances the project over 14 miles east from Pueblo Reservoir which puts us much closer to our first participants in Avondale and Boone,” said Brent Esplin, Regional Director of the Missouri-Basin and Arkansas-Rio Grande-Texas Gulf regions for Reclamation. “It is also the culmination of years of collaboration between Reclamation, Southeastern, and Pueblo Water to deliver a more cost-effective project to people of the lower Arkansas Valley.”

The contract will allow the Southeastern District to use capacity in Pueblo Water’s system to treat and deliver AVC water to a pipeline being constructed by Reclamation. The connection point for AVC is at the east end of Pueblo Water’s system, at 36th Lane and U.S. Highway 50.

The water will be either Fryingpan-Arkansas Project water or from participants’ water portfolios, not from Pueblo Water’s resources. The route of the AVC follows the Arkansas River corridor from Pueblo to Lamar, with spurs to Eads and Crowley County. Reclamation is building the trunk line, while the Southeastern District will build the spur and delivery lines. Estimated total cost is about $600 million.

The Southeastern and Pueblo Water boards both unanimously approved the contract on March 15 and 17, 2022, respectively.

“This project is vitally important to the people of the Lower Arkansas Valley,” said Bill Long, President of the Southeastern District board. “It would not be viable, and certainly not affordable without the partnership with Pueblo Water, and I would like to express my appreciation to the board.”

“This is a truly monumental achievement and marks the culmination of decades of hard work, dedication, and collaboration by those who have devoted their lives to the business of water,” said Seth Clayton, executive director of Pueblo Water. “Pueblo Water is proud to be an integral participant in this important time in history.”

Many of the Lower Arkansas Valley water systems face water-quality enforcement actions for radionuclides or surface contaminants in groundwater sources. They face ever increasing costs to cope with these problems. The AVC will eliminate or reduce the effects of those contaminants by delivering filtered water from Pueblo Reservoir.

This is seen as a win-win opportunity by both Pueblo Water and the Southeastern District because it reduces the cost of an earlier plan to build a new pipeline south of Pueblo.

“Not only does the agreement save the AVC project hundreds of millions of dollars and years of construction time, but it also benefits Pueblo Water customers by providing an opportunity to use the excess capacity we have in our system and deliver water to our neighbors in the Lower Arkansas Valley,” Clayton said.

Pueblo Water will charge an initial rate of $2.19 per 1,000 gallons delivered, which reflects the operation and maintenance costs of those parts of the system needed by AVC. The rate will increase annually at the same rate as Pueblo Water’s other customers.

Pueblo Water will also renew its contract to store excess capacity water in Pueblo Reservoir for a 50- year period under the contract.

Finally, the contract spells out environmental commitments and operating conditions related to AVC. “The significance of this action is that everybody will have the opportunity to have a clean source of drinking water after more than 20 years of work,” said Jim Broderick, executive director of the Southeastern District.

Alan Hamel, a Southeastern Board member, and former Pueblo Water executive director, said the idea for the AVC actually goes back 60 years, to the 1962 signing of the Fryingpan-Arkansas Project into law. In 1968, there was a plan to jointly build a federal treatment plant for Pueblo Water and the water line for AVC.

The AVC was put on hold because of the inability of communities to pay for it. The AVC concept was revived in 2000, and a 2009 federal law provided for 65 percent federal funding, to be matched by 35 percent in other funding.

Reclamation issued a Record of Decision in 2014 which endorsed construction of the AVC to proceed via the “Comanche North” alignment. The alignment was modified in 2019 through a collaborative effort between Reclamation, Southeastern, and Pueblo Water which replaced the pipeline around Pueblo with this contract.

Federal funding so far has totaled $40 million, while $100 million in loans or grants is available to AVC through the Colorado Water Conservation Board. The District has contributed $4.8 million through its Enterprise, while participants have paid $1.5 million since 2011.

Pueblo County recently contributed $1.2 million to build delivery lines to Boone and Avondale through local American Rescue Plan Act funds, and other counties or cities in the Arkansas Valley are expected to contribute as well.