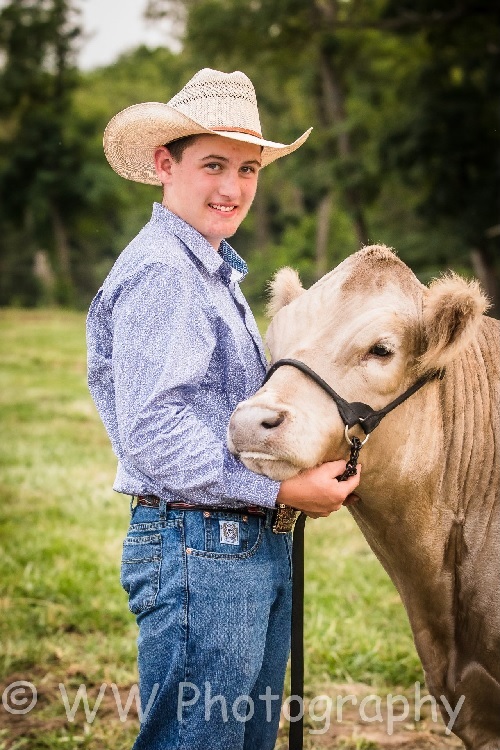 Being a part of the show cattle industry affords us the opportunity to work with some of the best in the business. Not only do they bring a wealth of knowledge about livestock to the table, but they are also some of the biggest hearted people around.

A big heart can certainly be used to describe Iowa 4-H member, Owen Powell, and his family. Powell is a member of the Blue Grass Jr. Farmers 4-H Club in Eastern Iowa and was selected to be a participant in this year’s Governor’s Charity Steer Show at the Iowa State Fair. The Governor’s Charity Steer Show is a long-standing tradition that raises money for the Ronald McDonald Houses of Iowa, an organization that provides housing and meals to families who children are receiving ongoing medical care.

At this year’s show, Powell and his Lim-Flex steer Chuck made history by raising a whopping $42,600 through donations from his family and community. After the show, Chuck was sold on the auction, which brought in an additional $5,000 and their total set a new record for the event.

Powell got started with this journey by sending a letter to planning co-chairs Tanner Lawton and Casey Andersen requesting to be considered as an exhibitor. After months of waiting, Powell was notified that he had been selected. His steer Chuck was purchased from a local Limousin breeder, Kraig Puck for market price, and initially wound up in the feedlot instead of the show barn. It was not until after he found out that he was selected that Powell decided he wanted to show Chuck instead of the steer he had been working with.

“I just wasn’t happy with the way my other steer was developing,” said Powell. “I thought Chuck would be better, so we took him out of the feedlot and started working with him every day.”

Along with the hours he was putting in the barn, Powell jumped right into fundraising. He started gaining local recognition for the project after he sent letters to businesses about his journey. What makes Powell’s story hit home is the fact that he was selected to represent the Volunteer Boards of the Iowa Ronald McDonald House Charities and his celebrities, Josh, and Kristi Rasmusson, had first-hand experience with the organization. They are some of the many people that have utilized the Ronald McDonald charity when their son was born prematurely and had to stay in the hospital for monitoring. The family has been working with the house board ever since.

Other support for Powell and Chuck came through donations of over 100 pounds of pop tabs and around 3,000 non-perishable items, which were taken to the Eastern Iowa house. This support came not only from the adult community but also from local 4-H members.

On the day of the show, Powell made it clear that he did not want a professional crew fitting on his steer, rather he wanted to keep it fun. To do this, he brought in some of his fellow 4-H members and cattle show competitors to help.

“We were the only group will all kids fitting on their steer,” said Powell. “And it was really neat because they got to follow me to the showring. I know it meant a lot to them and it meant a lot to me to have their help.”

Because of his efforts, Powell was considered a contender for the Community Hero Award, which is a new addition to the show this year and looks at both the amount of nonperishable and pop tab donations the exhibitor raised and also how many shares they received on social media.

Powell’s inspiring experience speaks to the generosity found in the livestock industry and to the caliber of kids you find in the show ring. It is truly amazing to see the impact an exhibitor and their calf can have.

If you are interested in learning more about his story or to donate, you can visit https://donorbox.org/gcss and select number nine for Owen and Chuck.