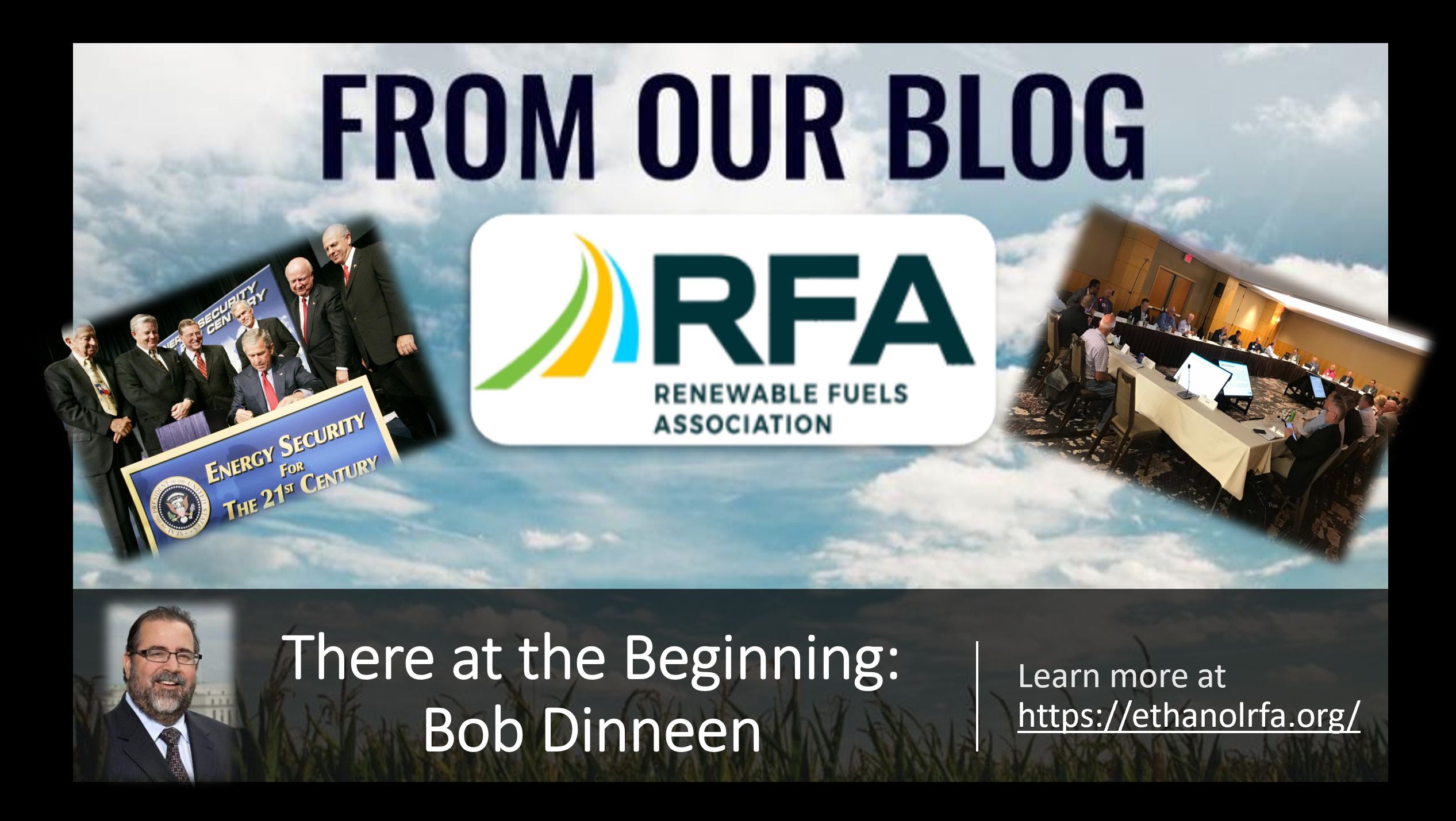 RFA: There at the Beginning; Bob Dinneen…

By Ken Colombini, Director of Communications

Fourth in an occasional series. In honor of our 40th anniversary this year, we spoke with a few of the folks involved in the first decades of RFA and the ethanol industry. Feel free to recommend interview subjects by emailing their contact information to kcolombini@ethanolrfa.org.

One of the leading authorities on the history of the U.S. ethanol industry didn’t get his start working for the energy or agriculture sectors. He grew up in the suburbs of Boston before finding his way to our nation’s capital. It was, at the beginning, softball that brought Bob Dinneen to the ethanol industry and to RFA, in 1987.

Dinneen was working on Capitol Hill with a pregnant wife, looking for a new job that could support a young and growing family. At the time, he played softball with Al Tank of the National Corn Growers Association, who suggested he look at the fledgling RFA, which at that time shared offices with NCGA. The industry was producing about 650 million gallons a year at that point.

“He said, ‘Look, the guy that’s running the ethanol trade association is looking for somebody that knows the Hill and you would certainly fit that bill’,” Dinneen recalled. “But he cautioned me. He said, ‘Bob, I’ve got to tell you. I cannot say whether or not this industry is even going to be around five years from now or not.’ And with that cautionary tale, I went and interviewed, and ultimately got the job. And Al and I still laugh about his pessimism about the future of the industry.”

Bob Dinneen has been with RFA ever since,  serving as president and CEO from 2001 to 2018. He’s currently the organization’s senior strategic advisor. As someone with a degree in political science and Hill experience, Dinneen’s focus has remained largely on policy and using both legislation and regulations to grow an industry.

In the beginning, one of the principal ways to do this was through tax policy. A partial exemption for ethanol from federal excise taxes on motor fuel was enacted in 1978 as part of the Energy Tax Act. To address concerns about the tax exemption’s impact on the Highway Trust Fund, in 2004 the partial excise tax exemption was changed to an excise tax credit—the Volumetric Ethanol Excise Tax Credit, or VEETC—which existed until 2011.

At the same time, concerns about environmental and health problems related to gasoline spoke in ethanol’s favor, Dinneen noted, with the shift from leaded gasoline to oxygenated fuel. For refiners, Dinneen said, MTBE became the oxygenate of choice to add to gasoline, and over time that became a health issue.

As more and more municipalities and states banned MTBE in the 1990s, ethanol began its ascendancy.

If there was one point in time Dinneen remembers well, it was the passage and signing of the Renewable Fuel Standard in 2005. In RFA’s review last year of the 15th anniversary of the RFS, Dinneen offers a “personal recollection” of the bill – and what kept him from attending the August 8, 2005, bill signing.
Dinneen recalls how the growth of the industry at that point “astounded people, including the environmental community, that had largely sat on the sidelines during the 2005 bill. They recognized that there’s a way, with an incentive like this, to not only lower our dependence on imported oil and dirtier fuels but encourage new, cleaner biofuels.”

“There were offramps all over the place if those targets weren’t met,” Dinneen said. “But it created a framework that encouraged investment, provided market opportunity and got the infrastructure moving so that ethanol went from being a niche market to a ubiquitous market where it was being sold from coast to coast and border to border, creating the market that you have today. … Even today I would still consider that bill to be the pinnacle of my professional life.”

Dinneen now lives on an island off the Potomac, not too far from the corridors of power he knows so well in the nation’s capital. In the years ahead, he wants to focus on writing and comes by it naturally—his grandfather was a published author and longtime writer for the Boston Globe whose books about the famous $2.8 million Brinks robbery of 1950 “made as much money from that robbery as if he had been a member of the gang,” Dinneen said.

In the end, the one thing Dinneen appreciates most about the trade association he saw grow up over the decades—“When I started, the board meetings could be held in a phone booth”—is its emphasis on the leadership of all its members.

“It was always the RFA’s objective that, if you were a member of the Renewable Fuels Association, you were going to have an equal vote, so the smallest farmer-owned co-op had the same vote and it was worth the same as the largest ethanol company on the planet,” he said. “I give credit to those large plants for recognizing that that kind of a democratic principle was possible or necessary. But that has been a bedrock principle of the RFA. We are a producer association. Producers are going to direct the policy, and everybody will have an equal voice.”