07-28-21 Santa Gertrudis: The Right Fit For Any Environment 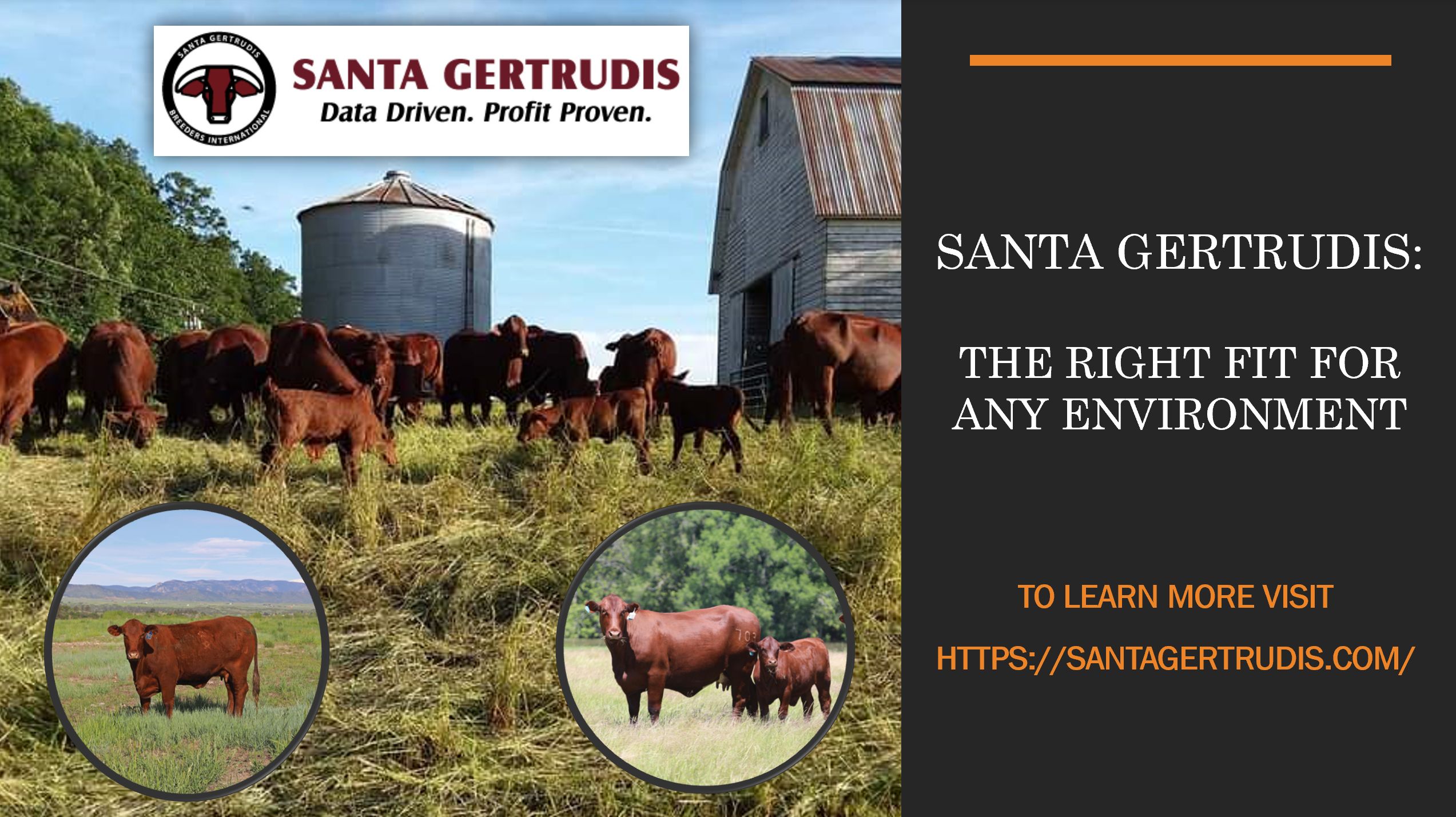 Santa Gertrudis: The Right Fit For Any Environment

KINSGVILLE, Texas – From the rolling hills of Indiana, down to the river bottoms of Louisiana and out to the foothills of Colorado, the Santa Gertrudis breed continues to prove its adaptability and profitability for producers everywhere.

Originally developed to withstand the harsh brush country of south Texas, Santa Gertrudis cattle are now found thriving in a myriad of environmental conditions. Three cattlemen – with operations in varying climates and landscapes – describe how Santa Gertrudis genetics are adding value to the cattle industry.

Bob Hiss, a dairy farmer-turned-cattleman from Columbia City, Ind., wasn’t exactly sure what he was buying when he purchased a set of red, crossbred heifers at the auction barn nearly 25 years ago, but he knew he liked their look and was especially excited when they turned out to be excellent mama cows in his new beef cattle business.After discovering they were Santa Gertrudis influenced, he and his late wife, Margie, bought their first Gert purebreds from a herd dispersal in Texas. With the help of his three grown daughters and other family members, Hiss has since developed a successful seedstock operation on his 250-acre Hiss Family Farms, where he uses rotational grazing practices on fields of alfalfa, clover, brome and orchardgrass.

Hiss markets his replacement-quality females to other seedstock producers, primarily through sales in Alabama and South Carolina, where he recently consigned the highest selling yearling heifer. He also sells bulls to commercial cattlemen looking to capture the value of hybrid vigor and improve maternal instinct in their herds.

With an abundant supply of corn silage, corn and alfalfa, Hiss conditions his steers and culled females to market as freezer beef, which he says, “sells itself.”

“I haven’t had to advertise any of our freezer beef for sale,” he says. “We have many repeat buyers who have spread the word about the quality, tenderness and taste of our beef, and we usually always have customers waiting.”

Although not extremely common in his neck of the woods, Hiss says his Santa Gertrudis cattle are well-adapted to northern Indiana, where seasonal climate conditions are somewhat erratic. Hiss has seen winters that average 25 to 30 inches of snow and others with only a few nights below freezing. Summer temperatures can reach more than 100 degrees but tend to average in the 80s and 90s. He has been especially impressed with the hardiness of the Santa Gertrudis breed, whether it’s during a hot and dry season or during a polar vortex storm like they saw a few years back.

“We had two days at -20 degrees and didn’t lose a single animal; they weren’t even shivering,” Hiss says. “And likewise in the summer, they have very little shade and still manage very well in the heat.”

In addition to climate variability, Hiss says flies can be a major nuisance in his area, but with their characteristic insect resistance, his Santa Gertrudis cattle have very few problems.

“We don’t have to fight pink eye with our cattle like other breeds around us do,” he says. “I am just always amazed at how well these cattle can do in even the harshest conditions. It doesn’t seem to matter what nature throws at them, they stay hardy, stay healthy and just keep doing their job. Their versatility has really been profitable for our operation.”

When Deville, La., producer Erik Wiley and his father, Kim, looked to diversify their row crop operation in 2009, they were especially interested in cattle that would thrive in their hot and humid summers while adding value to their family farm. They found success with the Santa Gertrudis breed.

“Brahman cattle work well in our area, but we didn’t really like their temperament,” he says. “We chose Santa Gertrudis based on their docility, superior mothering ability and adaptability to the central Louisiana climate.”

Today, Wiley Ranch is home to nearly 500 Santa Gertrudis cows that run on a combination of native grass, ryegrass and clover. The family has divided nearly 1,800 acres into 50-acre paddocks and utilizes an intensive rotational grazing program to maximize forage quality.

With an annual rainfall of 50 to 60 inches, Wiley says his area often sees 100-degree summer days, 50 to 60 percent humidity and some very muddy winters, but his cows remain tolerant of the conditions.

As the largest Santa Gertrudis seedstock producer in Louisiana, Wiley Ranch genetics can be found in herds across the country and internationally. The family uses both a production sale in September and private treaty sales to market purebred and commercial females and approximately 25 bulls each year. Most of their bulls are used in commercial operations to take advantage of heterosis, and Wiley says many of his customers also retain their Gert-influenced heifers to improve maternal characteristics within their herds.

As both a breeder and Santa Gertrudis Breeders International (SGBI) Board member, Wiley says targeted trait improvements being made to meet industry demands, coupled with natural adaptability, have fueled the breed’s growth and popularity with producers across the country.

“All breeds are noticing what we’re doing, especially how we’ve moved from a large-frame cow to a more moderate size and how we’ve really cleaned up the underlines,” he says. “The packers are also noticing that these cattle grade well on the grid.

“Their improved performance and ability to thrive in a variety of conditions can really add value to a herd.”

As manager of Cherokee Ranch, Sedalia, Colo., Rafael Miranda has had the unique opportunity to develop Santa Gertrudis seedstock that work especially well in the rugged terrain and semi-arid climate of central Colorado and beyond. The ranch was established in 1954 when pioneer cattlewoman Tweet Kimball became the first rancher to introduce the breed in Colorado.

“Tweet used to remind everyone that the breed is five-eighths Shorthorn and should not have any problem taking the cold weather, especially if they are acclimated at the right time,” Miranda says. “We try to introduce new animals during the warmer summer months to give them a chance to adapt, and they do a really good job.”

Miranda says the area annually experiences four seasons, with warm temperatures in the summer that often lead into an Indian summer, where temperatures can be abnormally warm for early fall, before it begins to cool down. Average winter temperatures are in the 40s, but March and April usually bring several inches of snow.

“We can get a foot of snow and still see our cows with their noses on the ground, looking for grass,” he says. “They just figure it out, and the younger calves learn from watching their mamas.”

Despite the snow, Miranda says the average annual precipitation is only 17 inches and forage is often limited, but the cattle are hardy and willing to travel through the rocky landscape to find food.

“Our elevation goes from 5,800 feet up to 7,000 feet and there are very few meadows,” he says. “It’s really pretty rugged, but the cows still thrive and do very well here.”

While his market has traditionally been stronger in southern states, he has seen increased interest from cattlemen in the North and has recently sold bulls into Iowa, Nebraska and Wyoming. Many of his newer customers are kin to original ranch customers who are looking to reintroduce the breed back in their operations.

“Some of our original customers kept detailed records of their success with Santa Gertrudis genetics, and the younger generation is really excited about the feed conversion and other performance traits they’re finding as they go back over them,” he says. “As the climate gets warmer and warmer, some northern producers want to inject the Brahman influence in their cattle to get along better in the feedlots, and they’re turning to Santa Gertrudis because they can adapt and perform so well in different environments.

“We use GrowSafe Systems to measure feed efficiency in individual animals and then select for that trait so our cattle can make more beef with less feed, and our customers are seeing a real improvement in the feedlots.”

Miranda, who currently serves on the SGBI Board of Directors, was also involved with the leadership back in the early 2000s when the breed began taking drastic measures to improve performance data and phenotype. Using his background as a commercial cattleman, his interest in DNA sampling and ultrasound and his expertise in artificial insemination, he has continued that focus at Cherokee Ranch.

Santa Gertrudis were developed for survival and are adaptable to most climates, environments and terrains, and cattle producers from across the country are starting to take notice.