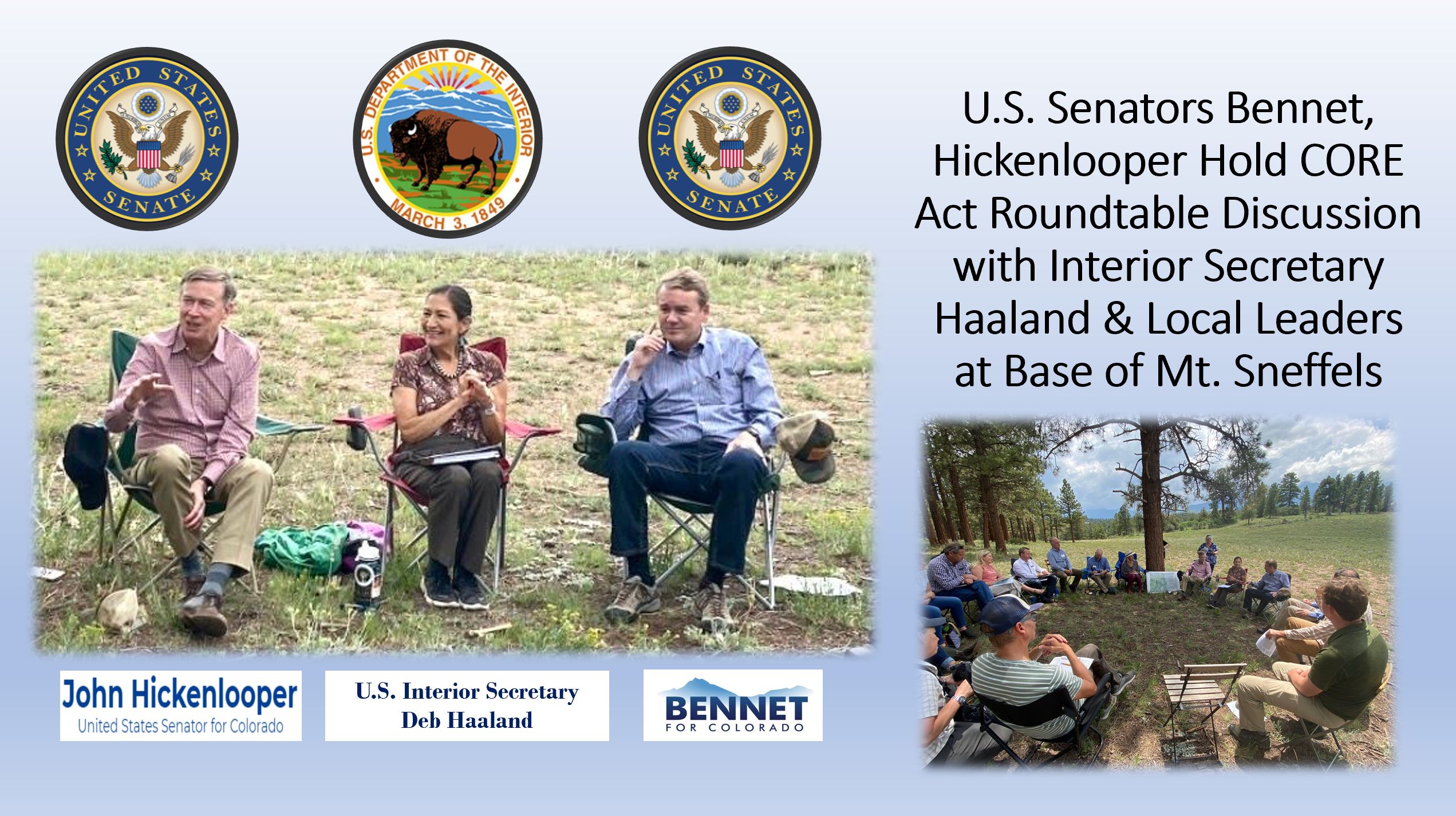 Ridgway, CO –– On July 25th, Colorado U.S. Senators Michael Bennet and John Hickenlooper hosted a roundtable discussion where Secretary of the Interior Deb Haaland heard from local elected officials and community leaders about the importance of passing the Colorado Outdoor Recreation Economy (CORE) Act. The group met at the base of Mount Sneffels, one of two fourteeners that the CORE Act would permanently protect.

“For the last decade, Coloradans from all walks of life have worked together to develop the four titles of the CORE Act, a piece of legislation that is representative of what we know to be true in Colorado –– protecting our public lands and strengthening our economy go hand in hand,” said Bennet. “We are glad to have Secretary Haaland in Ridgway today to hear directly from state and local leaders about what this bill means to our state. I appreciate her and the Biden Administration’s support as we work to push the CORE Act across the finish line in Congress.”

“The CORE Act has been a ten-year effort to protect Colorado’s pristine lands,” said Hickenlooper. “Today Secretary Haaland heard how important conservation and the outdoor recreation economy are to Coloradans. We all agree: we need to get this bill done!”

“I am honored that Secretary Haaland made the time to visit Southwest Colorado to talk to us about the CORE Act, and the dependence of our local economies on our public lands,” said Hillary Cooper, San Miguel County Commissioner. “We are fortunate to have experienced leaders like Senators Bennet and Hickenlooper who understand the important role our public lands play in growing our local economies and mitigating the deep challenges we face from a changing climate.”

“From Denver to Durango, and from Curecanti to Camp Hale, the CORE Act has united Coloradans from across the state to protect key public lands in Colorado for our wildlife, economy, outdoor recreation, forest and watershed health, and the well-being of our communities.  We appreciate the leadership of Senators Bennet and Hickenlooper, and Representatives Neguse, Crow, DeGette, and Perlmutter, and the strong support of Secretary Haaland and the Biden Administration in moving this important legislation forward,” said Scott Miller, Regional Director, The Wilderness Society.

“Colorado’s sporting community is eager to work with Secretary Haaland and our champions in Congress to finally push this important legislation across the finish line,” said Scott Willoughby, Colorado Coordinator for the Angler Conservation Program, Trout Unlimited. “The four signature landscapes protected by the CORE Act conserve more than 2,400 stream miles and hundreds of thousands of acres of critical wildlife habitat, preserving some of the premier fishing and hunting opportunities in the West. Passing this forward-thinking legislation will serve as a conservation milestone benefiting Colorado’s sportsmen and women for generations to come.”

Bennet and U.S. Congressman Joe Neguse introduced the comprehensive CORE Act for the first time in January 2019, following years of work in Colorado to develop, draft, and negotiate the four individual titles in the bill. The CORE Act combines four previously introduced Colorado public land bills, which have been in development over the past decade: the Continental Divide Recreation, Wilderness, and Camp Hale Legacy Act, the San Juan Mountains Wilderness Act, the Thompson Divide Withdrawal and Protection Act, and the Curecanti National Recreation Area Boundary Establishment Act.

In January 2021, Bennet, Hickenlooper, and Neguse reintroduced the CORE Act in the U.S. Senate and U.S. House of Representatives.

In February 2021, Haaland announced that the Biden Administration supports the CORE Act during her confirmation hearing in the Senate Committee on Energy and Natural Resources.

In June 2021,  the U.S. Senate Committee on Energy and Natural Resources held a hearing on the CORE Act in the Subcommittee on Public Lands, Forests, and Mining, where Senator Hickenlooper participated. Bennet testified before the subcommittee in support of the bill.

Of the land protected by the bill, about 73,000 acres are designated as new wilderness, and nearly 80,000 acres are designated as new recreation and conservation management areas that preserve existing outdoor uses, such as hiking and mountain biking. The bill also includes a first-of-its-kind designation for Camp Hale as a National Historic Landscape, to honor World War II veterans and Colorado’s military legacy, and prohibits new oil and gas development in areas important to ranchers and sportsmen in the Thompson Divide.

The CORE Act is supported by a broad coalition of counties, cities, towns, local leaders, conservation groups, sportsmen, and a wide range of outdoor businesses.

The following CORE Act resources are available below: