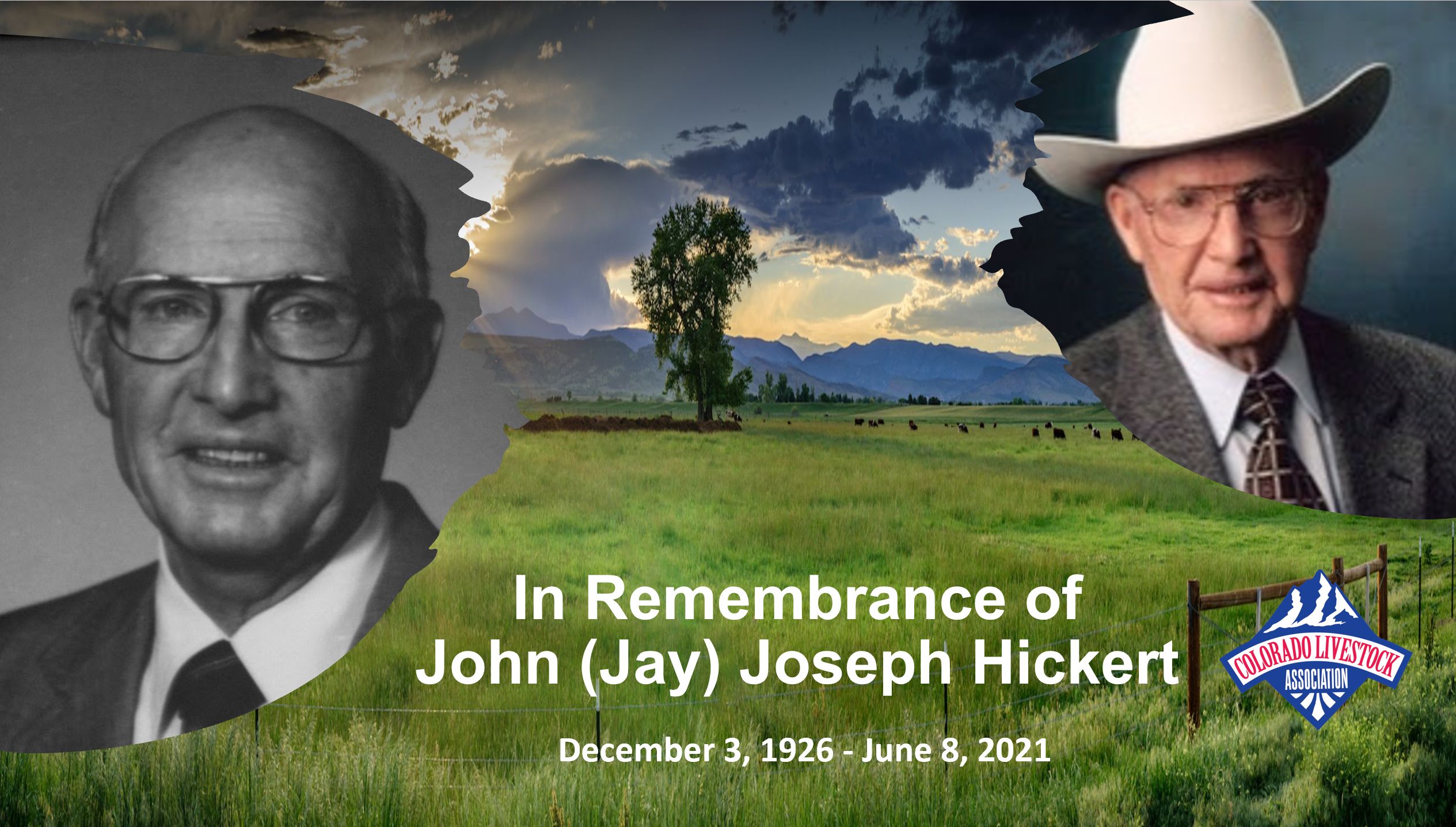 John (Jay) Joseph Hickert passed away June 8, 2021 in Akron, CO. Jay was born December 3, 1926 on the family farm in New Almelo, KS. He was the second of eleven children by John W. and Mary L. Hickert. He was baptized at St. Joseph’s Catholic Church in New Almelo where he attended grade school. He attended high school at St. John’s Military Academy in Hays, KS and Norton High School. Jay was born just prior to the Great Depression and as one of the oldest in the family started farming at a young age.

In 1948, Jay married the love of his life, Leota Youngs, and in 1950 they moved to Anton, CO to farm dry land wheat for an aunt and uncle. From 1949 to 1979, Jay and Leota raised two sons and four daughters. During this time, he was one of the pioneers in the cattle feeding industry in Colorado and an early adopter of center pivot irrigation and chemical fallow. Jay grew their farming and cattle feeding operation through the 70’s and 80’s. When he was not busy working outdoors, he was usually at his desk studying the commodities market, crunching numbers, reading history, current events, or the latest in farming and ranching. His cattle feeding business eventually provided him opportunities in the commercial feed yard and banking industries and he obtained his private pilot’s license. He enjoyed spending time with family and friends boating, fishing, hunting, and trap shooting. He enjoyed music, including family sing-a-longs with siblings as his mother played the piano in his younger years and listening to the choir at St. Thomas Aquinas Catholic Church in Goodyear, AZ when he was in his 80’s.

Jay was a member of St. Joseph Catholic Church, the Knights of Columbus, the Anton Coop, M&M Coop, Akron Elks, Sterling Production Credit Association, Colorado Livestock Association, National Cattlemen’s Beef Association, Flying Farmers, the CSU Advisory Council for the Animal Science Department and he was a founding member of Colorado Wheat Growers Association. He served terms on the Arickaree School Board, the 9th Farm Credit District Bank in Wichita, KS, and as chairman of Washington County Democrats. He sat on the board of Dinklage Feedyards and Western Bank. Jay was awarded the CSU Livestock Leader Award in 1998 and was inducted into the Colorado Ag Hall of Fame in 2018.

7:30pm Procession to St. Joseph’s Catholic Cemetery on the east outskirts of Akron

WAKE To be held at Akron Elks Club following burial.

Memorial donations may be made in Jay’s name to the Colorado FFA Foundation and Washington County Nursing Home.