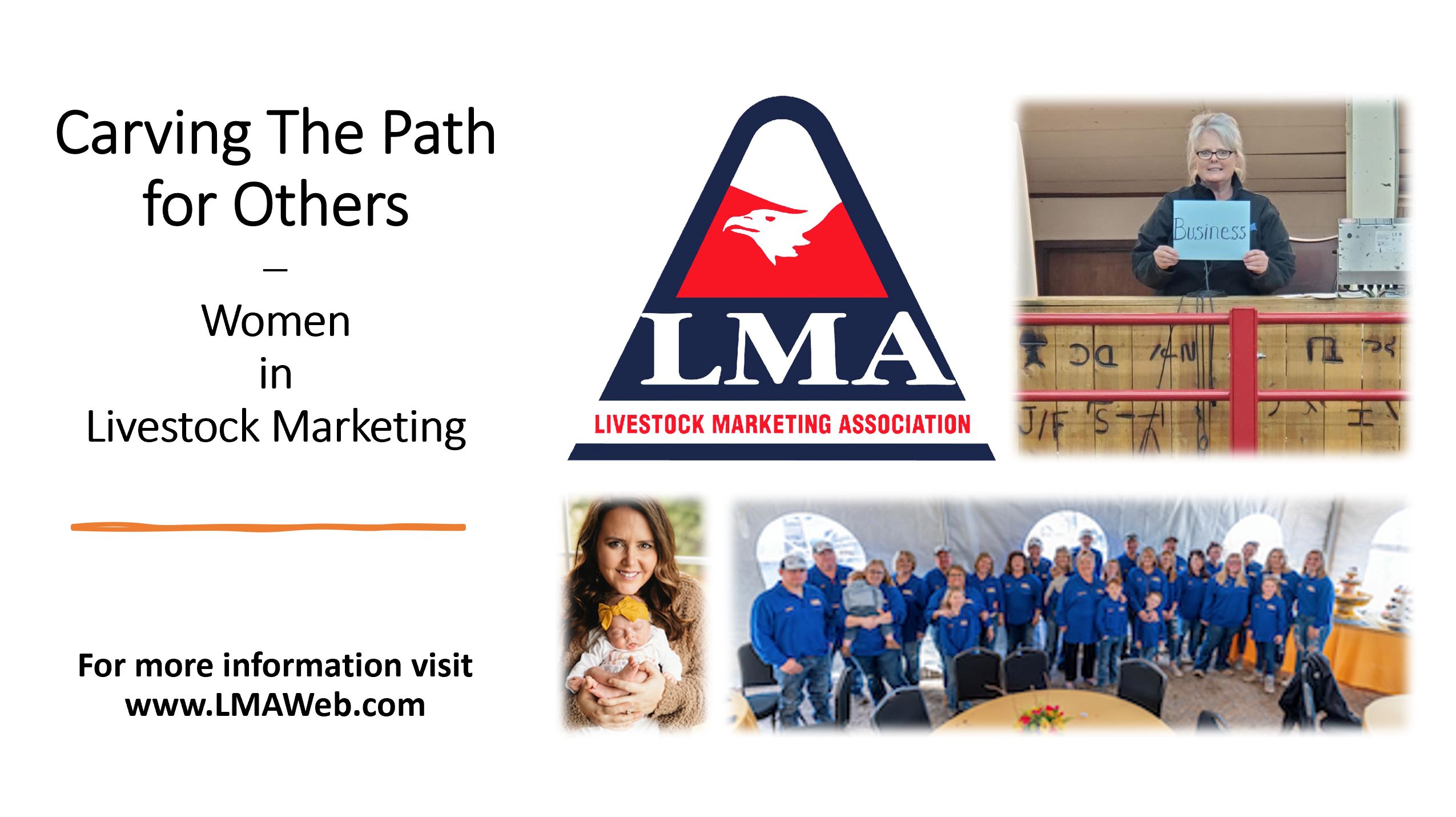 LMA: Carving The Path for Others – Women in Livestock Marketing

OVERLAND PARK, Kan. (May 14, 2021) – For decades, the livestock and livestock marketing industries have been influenced by male figures. To many, cow-boys and cattle-men are individuals who spent hours on horseback, driving cattle across the country and pouring blood and sweat into establishing the American West.

While they certainly left an impact on the foundation and modernization of our current-day operations, women have also trailblazed paths, opening doors for all to feel a sense of belonging in the livestock sectors.

Helen Marie started working in an auction setting after her parents purchased their first market in Okmulgee, OK. After selling that location, they bought a small, horse auction in Bristow, creating the foundation for what would eventually turn into Mid America Stockyards, Inc. In 1985, Helen’s brother sold his portion of the barn to her and her husband, and after her husband’s passing in 2017, she remained the sole decision maker for the family business.

“I guess you could say I’m the monarch of the family and still holding on,” Helen Marie said.

In her role as office manager, Helen Marie works regularly with buyers and sellers, answers customers’ questions when they call and takes accurate records for their market. Through all her years of experience, though, Helen Marie has learned how to establish long-term relationships with her customers, noting that some buyers and sellers run four generations deep.

“When you’re a woman or a lady in my position, you need to try to think like a man and always act professional,” Helen Marie says. “Either they’ll listen, or you’ll listen, but I always try to make the customer be right.”

Her three sons and their wives, grandchildren and great-grandchildren have all helped with the day-to-day operations of the family business at some point. Although Mid America Stockyards recently switched ownership, Helen believes the men and women who came before them allowed her to play a role in shaping their auction business.

“It’s been a great life,” Helen Marie said. “I love it. I’ve been so fortunate to have those in my life, especially my husband and dad, who encouraged me to be a strong front figure in this business. They pushed me to do what has made me the person I am today.”

Robin Varelman, owner of Livestock Exchange, LLC in Brush, Colorado, also grew up with a passion for the livestock auction industry. For nearly 20 years, Robin worked various jobs at auction markets in different locations. In 2014, she knew it was time to take the next step in her career, and she purchased Livestock Exchange. Robin credits her success to her willingness to work, regardless of the task at hand.

“There isn’t a single job I can’t do at my auction, except auctioneer,” Robin said. “I’ll put on my boots and walk through the cattle or help you sort. Whatever you want. That’s my job.”

A typical day for Robin starts around 4:30 a.m. on her own cattle operation in eastern Colorado. She arrives at her auction between 6:30 a.m. and 7:00 a.m., except on Sundays. After making coffee and meeting for a morning debriefing with her employees, she focuses specifically on business entities, knowing her local producers will call with a variety of questions in the afternoon.

While she has an established relationship with her customers now, Robin says her background and knowledge in marketing livestock was often overlooked as a female. However, through hard work and determination she proved her goals were producer focused, earning their respect, and ultimately, their business.

“They have built trust in me,” Robin said. “I think that’s the most important thing in a relationship, whether it be a friend or someone in a livestock transaction. They know I have their best interest in mind.”

While relationships are critical to her business, Robin’s knowledge in livestock production from her own operation gives her an advantage when helping customers maximize value of their livestock. Robin says her goal and job is to ensure her customers are aware of the reasons their livestock may bring a certain price and how to capitalize on sale day.

“I watch the markets regularly,” Robin said. “While that’s a factor of our industry I can’t control, I can control how you and your livestock are treated when you come to my facilities.”

When thinking about advice for other women looking to get involved in livestock marketing, Robin says that when you do right, then right will follow.

“Don’t let hurdles stand in your way – you are meant to learn from them,” Robin said. “If it’s your driven path, do what the good Lord has intended for you.”

Although Stephanie Barnett was raised in agriculture, she was convinced her driven path would not lead her to marrying a farmer. Now, she’s the office secretary at Kentucky-Tennesse Livestock Market in Guthrie, Kentucky, a livestock auction operated by her husband, also a farmer, and his family.

Stephanie started working at the auction in 2007, learning the business inside and out. At the time, she was engaged to her husband, Tom, working another job at a local co-op and attending college. In 2012, the main office secretary retired, and she transitioned into the position, eventually where she would take a lead management role in overseeing facility maintenance, accounting, payrolls, reports, employee tasks and many other day-to-day operations.

“While Tom and my father-in-law, Mark, are farming full-time or taking calls from producers, I try to keep everything at the market running as smooth as possible,” Stephanie said. “My job is very broad.”

Growing up, Stephanie remembers going to the stockyard and selling cattle with her grandfather, as well as leaving for the fields in the mornings with her dad and uncles. Traditionally, her mother stayed at home to “keep it together”, but Stephanie says that more women in the industry are being noticed on the frontlines as they leave their homes and take on larger responsibilities.

“I think for years women flew under the radar,” Stephanie said. “They led silently but were never given true leadership roles. I think now, as women take more roles in agriculture, we’re seeing the ways they are strengthening our industry. Not with the attitude that ‘I can do this better than a man can do it’, but because they’ve always been leading while supporting their families.”

Stephanie says the respect she receives from her husband and father-in-law, when it comes to making business decisions for Kentucky-Tennessee Livestock Market, is critical to their success. When discussing issues, advertising ideas, or special sales, they seek and value her input.

“I always joke and say that behind every good man there is an even better woman,” Stephanie said.

Whether male or female, providing opportunities for future generations to continue traditions in livestock or market settings is a commonality shared by all. As a new mother, Stephanie has already been thinking about ways for her 8-week-old daughter to become a leader in the livestock marketing and agriculture industries.

“At my age, I’m thinking about how we preserve this lifestyle for the next generation,” Stephanie said. “And I hope that we, as women, can inspire other females to look at those agriculture jobs and auction careers.”

While Stephanie may help to lay the groundwork for her daughter’s future, she also understands the strong sense of self-worth needed to step into those roles.

“As long as you know your industry, and you know your role, I think you will do exceptionally well,” Stephanie said. “Don’t be afraid to lead.”

About the Livestock Marketing Association

The Livestock Marketing Association (LMA), headquartered in Overland Park, Kan., is North America’s leading, national trade association dedicated to serving its members in the open and competitive auction method of marketing livestock. Founded in 1947, LMA has more than 800 member businesses across the U.S. and Canada and remains invested in both the livestock and livestock marketing industries through support, representation and communication efforts. For more information, visit www.LMAWeb.com.