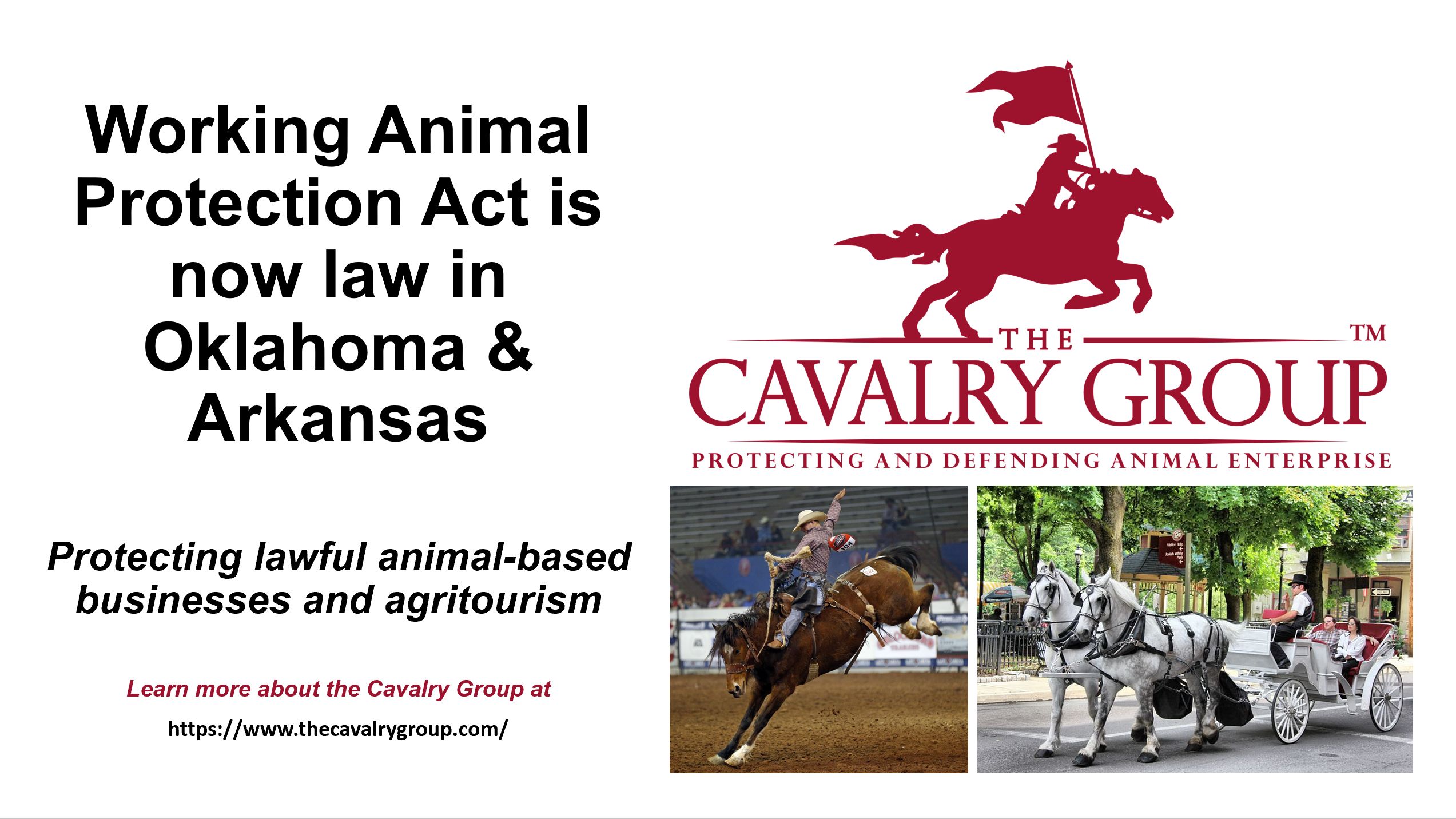 GUTHRIE, Okla. (AgPR) May 13, 2121 — The Cavalry Group is proud to announce that the Working Animal Protection Act has passed the legislature and has been signed into law by the Governor in both Arkansas and Oklahoma.

In an effort to stop the animal rights groups from influencing local municipalities into banning legal, law abiding animal-related businesses, The Cavalry Group put forth an effort to go on offense by introducing the Working Animal Protection Act (WAPA) in several states during the 2021 legislature with quick success in Arkansas and Oklahoma.

Mindy Patterson, President of The Cavalry Group, a national member-based organization dedicated to protecting and defending the Constitutional rights of animal owners and animal enterprise, helped author this legislation with the objective of fortifying the rights of animal-based business owners and agritourism. Patterson says that “animal rights groups have been pushing legislative bans repeatedly across the country using money and pressure to influence local government to legislatively ban lawful animal related businesses.”

Additionally, Patterson affirms that local bans against animal enterprise and agritourism destroys animal ownership, job opportunities, and revenue that animal exhibitors, rodeos, horse-drawn carriage companies, and many lawful animal-based businesses bring to the state. These extremist-driven bans further prevent the opportunity for individuals, families, and the public to enjoy access to and interaction with animals simply because these activities don’t align with animal rights groups and their ideology.

“Our mission is to protect animal enterprise and agritourism across America,” said Patterson.  “Arkansas and Oklahoma citizens are very lucky to have legislators who put businesses and families first, resisting the pressure from extreme sources inside and outside of the of the State. Their leadership will be an important stepping stone providing momentum to protect lawful animal-related businesses in other states and we express our sincere gratitude to the bill sponsors for their hard work and efforts to successfully pass the Working Animal Protection Act in Arkansas and Oklahoma. These are the first states to pass this preemptive legislation to protect lawful animal enterprise and agritourism from being legislatively banned.”

About The Cavalry Group

The Cavalry Group is a private member-based company working to protect and advance the Constitutional and private property rights of law abiding animal owners, animal-related businesses, and agricultural concerns legally, legislatively, culturally, and in the media nationwide. For more information visit www.thecavalrygroup.com.