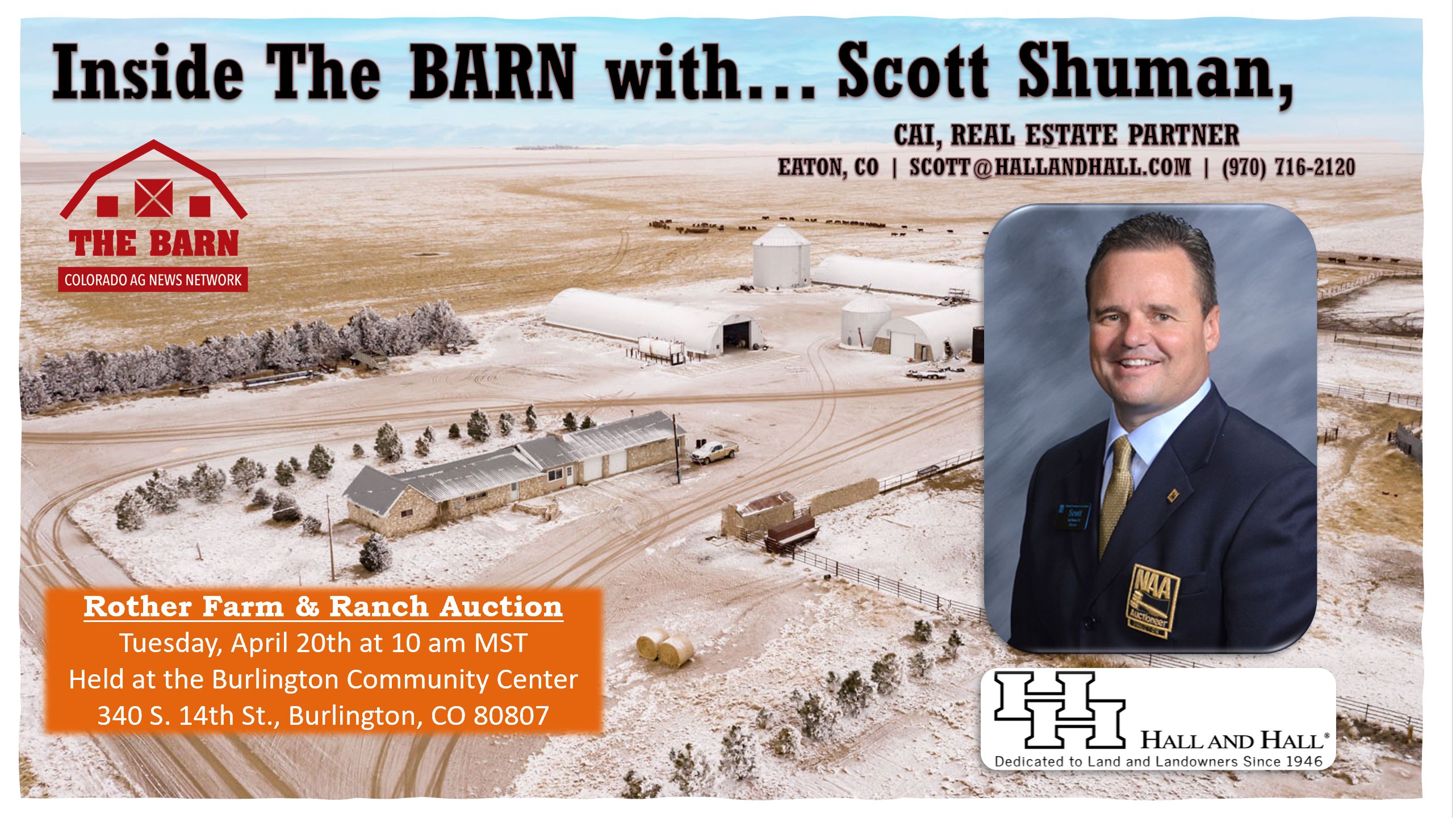 Inside The BARN with Scott Shuman of Hall and Hall…75th Anniversary, Rother Farm & Ranch Auction on April 20th & MORE

The BARN – Briggsdale, CO – April 7, 2021 – Ranches and farms have become recognized as a legitimate investment class asset. Since virtually every investment class asset, from stocks and bonds to rare art and collectibles, is traded in an auction market, Hall and Hall saw an opportunity to extend their hallmark real estate services and to support their clients with a service for land auctions that would deliver time-sensitive liquidity.

Scott Shuman is a partner and an Auctioneer for Hall and Hall Auctions. He has more than 30 years of auction experience attending auction school in 1986 and opening an auction firm shortly thereafter. Scott is the 2014 Colorado State Champion Auctioneer. He was awarded the 1997, 2002 and 2014 Auction of the Year awards from the NAA, as well as the prestigious Rose Award presented by the Certified Auctioneers Institute. Scott has served as an instructor for the Certified Auctioneers Institute and has been a featured speaker for the auction industry at conferences throughout the United States. He is the past National President and past Chairman of the Board of the National Auctioneers Association. Scott is a licensed Real Estate agent and/or Auctioneer in 26 states. Scott and his wife Krista reside in Eaton, Colorado with their three children. Their hobbies include snow skiing and cheering on the Denver Broncos.

ABOUT HALL AND HALL

DEDICATED TO LAND AND LANDOWNERS – The year was 1946—a time when our soldiers were returning home from war. The United Nations held its first general session. The movie “It’s a Wonderful Life,” had just been released. And Roy Rogers was riding tall in the saddle and in the hearts of people across the country. This was also a time for new adventures– and new business opportunities. Henry Hall and his son, Warren, founded Hall and Hall Mortgage Company as the exclusive correspondent for the Connecticut Mutual Life Insurance Company, a major lender to the agricultural community. Traversing the vast landscape of the West and carrying his bedroll, a forty-five pistol, and a stack of loan applications on the seat beside him, Henry developed close business and personal relationships with the hard-working ranchers and farmers he met along the way. Early friendships were built on trust, good advice, and being there to lend a helping hand. And the basic principles of integrity, fairness, and hard work were woven into the fabric of everything we do. Now well into our third generation of operation, Hall and Hall continues to embrace the original principles our founders established.