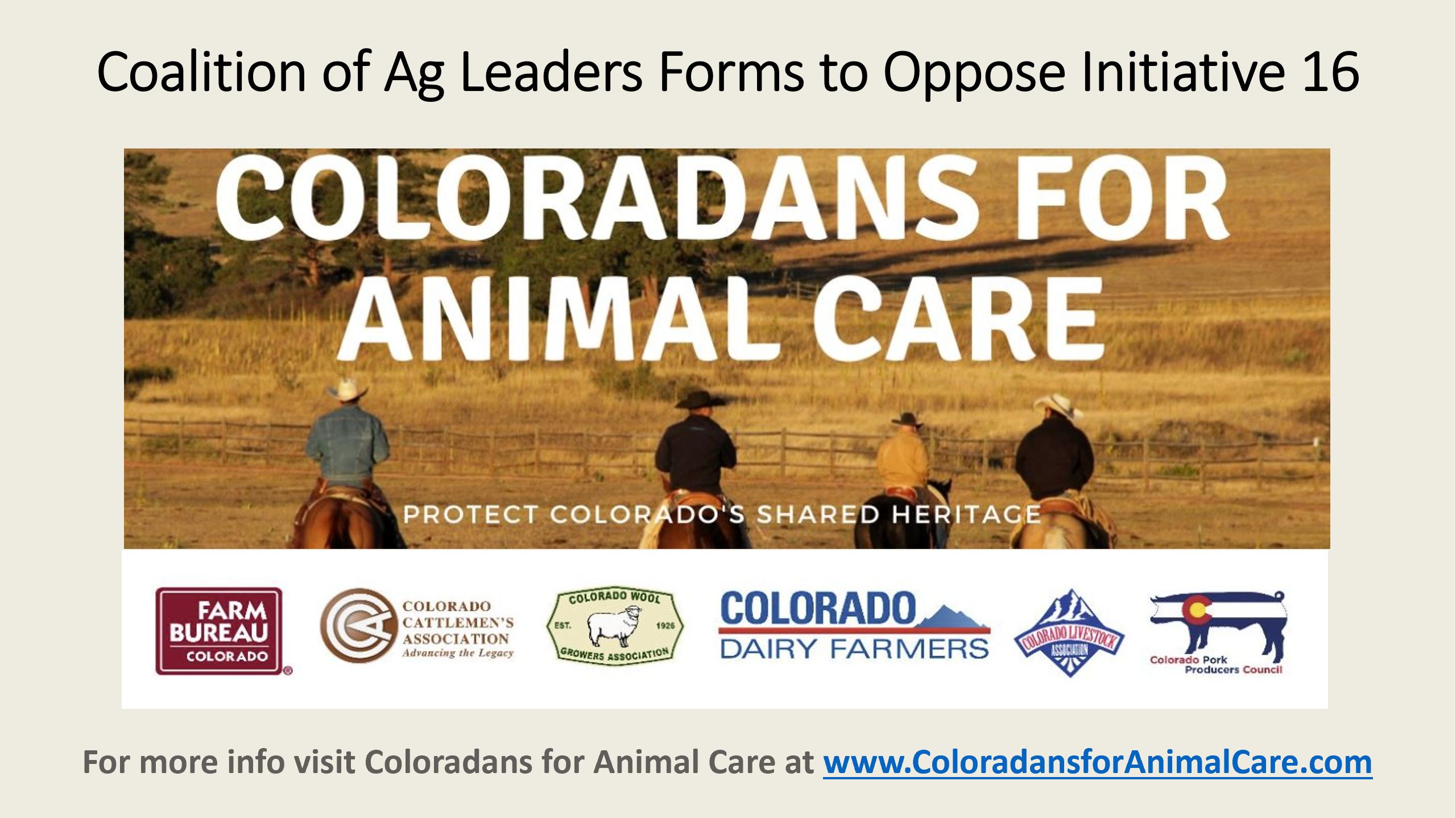 Files for Rehearing with Title Board

Centennial, Colo. — A coalition of state agriculture leaders and their organizations has formed to oppose Initiative 16, a potential 2022 ballot initiative that would ask voters to criminalize commonly accepted veterinary and animal care practices in Colorado. It would also ban the slaughter of livestock that have not yet lived more than one-quarter of their anticipated lifetime, a standard far longer than consumer and foreign markets demand.

“We’ve come together to oppose one of the most radical and reactionary ballot initiative proposals this state has ever seen,” said Carlyle Currier, a rancher from Molina and president of Colorado Farm Bureau. “We can’t allow such a direct and brazen attack on one of the state’s largest and most historic industries to go unanswered.”

“As farmers and ranchers, we are all very concerned about the well-being and humane care of our livestock and pets. Initiative 16’s deceptive title belies the irreparable harm this ballot measure will cause,” said Terry Snyder Lamers, president of the Colorado Wool Growers Association.

“Dairy farmers are the ultimate cow care providers. Our main job is to provide comfort to our cows. This ballot initiative ignores science and years of animal husbandry practices designed to give the best quality of life for our animals and produce the highest quality nutritional products for our families and consumers,” said Chris Kraft, chairman of Colorado Dairy Farmers.

“Initiative 16 would eliminate the exception for accepted husbandry practices for animals, which opens the door to allegations that even the most common practices constitute animal cruelty,” said Colorado Cattlemen’s Association President and rancher Janie VanWinkle. “For example, if a court concluded that spaying or neutering livestock was an unjustifiable procedure deeming it mistreatment, the rancher could be convicted—perhaps once for each animal.”

Through a spokesperson, Governor Polis said he, “agrees with farmers and ranchers that the PAUSE ballot initiative would hurt Colorado and destroy jobs, and he opposes it.”

“CO’s farming & livestock businesses are the backbones of CO rural communities. This measure is not based on science and will raise food prices for us all; worse yet, it will cost rural jobs & devastate communities. I will be fighting against it,” said Colorado Attorney General Phil Weiser in a tweet.

Collectively the livestock sector accounts for more than $5 billion in economic activity, more than $1 billion in exports and tens of thousands of jobs statewide. Beef cattle and dairy products are the state’s two largest ag sectors and create more than $3.6 billion in receipts.

For more info visit Coloradans for Animal Care at www.ColoradansforAnimalCare.com.