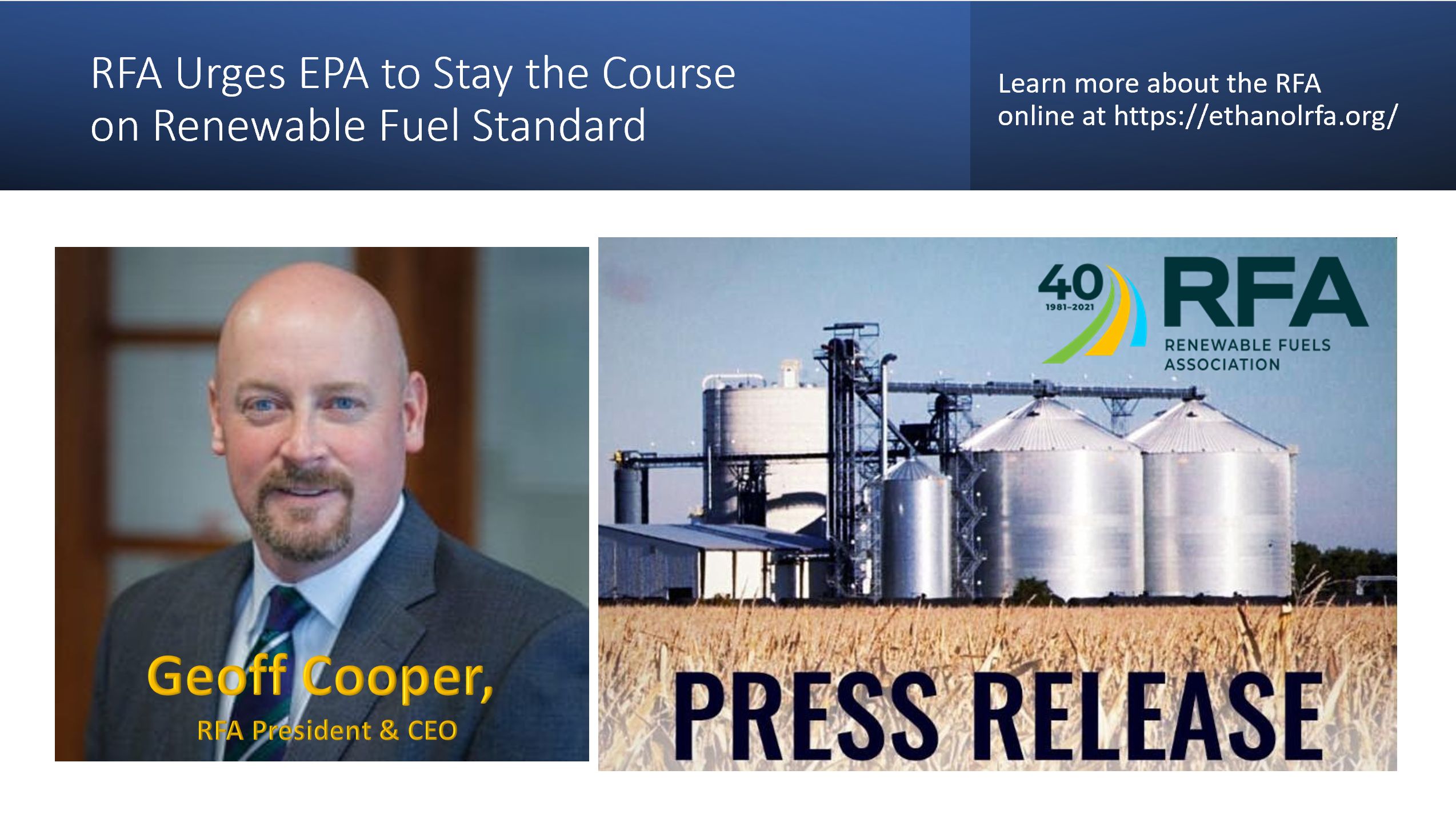 The Renewable Fuels Association on Wednesday asked newly confirmed EPA Administrator Michael Regan to “stay the course” on the Renewable Fuel Standard, as the important policy faces renewed attacks from oil refiners. In a letter to Regan, RFA responds to several assertions about the RFS and RIN credits contained in a letter sent Monday by the American Fuel & Petrochemical Manufacturers (AFPM).

“Contrary to the refiners’ claim that higher RIN values are a sign the RFS program is ‘broken,’ elevated RIN values are, in fact, a sign that the RFS is finally being allowed to work as intended to transform the transportation fuels marketplace,” wrote RFS President and CEO Geoff Cooper. “Even with the variety of compliance options available to obligated refiners, AFPM is asking EPA to ‘adjust’ (i.e., waive) the renewable fuel volumes required in 2021 based on the false premise that the fuel market cannot absorb the required amounts of conventional renewable fuel. However, even if AFPM’s arguments were legitimate, the Courts have rejected past attempts by EPA to reduce annual renewable fuel obligations based on supposed market barriers to increased biofuel consumption. They would most assuredly do so again.”

The RFA letter lists several options available to refiners for complying with the RFS, such as blending more flex fuels like E85, blending more E15, blending more biomass-based biodiesel, purchasing RIN credits from others, using surplus RIN credits from their RIN banks, or carrying forward a compliance deficit. “Refiners have numerous options and strategies available for compliance with the RFS. Most likely, refiners will use some combination of the above strategies. That optionality is a hallmark of the RFS program,” Cooper wrote, also noting that it is broadly accepted that the cost of acquiring RIN credits is recouped by all refiners, large and small. “Refiners who comply with the RFS by purchasing RIN credits (i.e., rather than blending renewable fuels) are passing the cost of those credits along to wholesale purchasers of their refined products.”

Cooper asks Regan to ensure the upcoming 2021 and 2022 RVO proposed rules include conventional renewable fuel volumes of at least 15 billion gallons per year, as required by the statute, along with the court-ordered 500 million gallons illegally waived from the 2016 standards.

“As you begin your tenure as Administrator, we respectfully encourage you to stay the course on the Renewable Fuel Standard,” the letter concluded. “Even in the face of continued attempts by the oil refining industry to undermine the program, the RFS has been an incredibly effective tool for reducing greenhouse gas emissions, cutting criteria tailpipe pollutants, reducing petroleum imports, and boosting rural economies.”