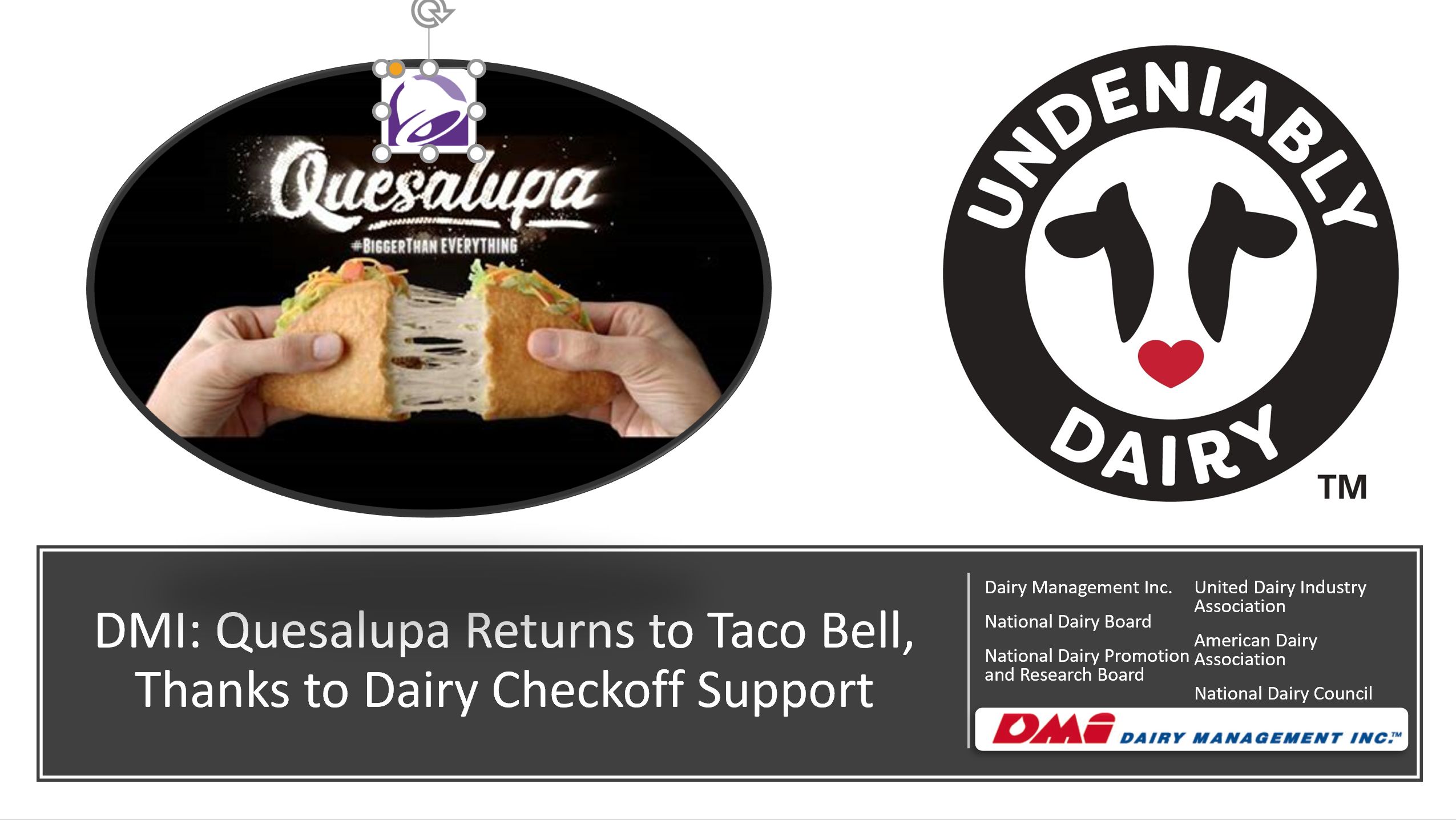 ROSEMONT, Ill. – The Quesalupa is making a comeback to Taco Bell’s menu and this version is cheesier than its predecessor, thanks to dairy checkoff scientists.

The Quesalupa made its debut in early 2016 as a limited-time only offering but it left quite an impression on Taco Bell’s customers, said Dairy Management Inc. (DMI) senior dairy scientist Mike Ciresi, who works onsite at Taco Bell’s headquarters in Irvine, Calif.

“When you think about the biggest innovative items Taco Bell has ever launched, the Quesalupa is in that bucket,” Ciresi said. “It has a cult-like following and Taco Bell’s customers really wanted the Quesalupa to return to the menu.”

The Quesalupa, which a different DMI food scientist helped create five years ago, features a flaky flatbread shell that is now stuffed with a whole milk mozzarella and Pepper Jack blend. The shell is deep fried before adding traditional taco fillings, including sour cream and cheddar. Ciresi said this version has “significantly more” cheese than the original.

It will roll out nationally on March 11 as a limited-time-only offering for 10 weeks.

“We’re excited to see the Quesalupa come back,” said Liz Matthews, chief food innovation officer at Taco Bell. “It’s one of the cheesiest, innovative products we have and the DMI partnership was instrumental in making this happen.”

Ciresi and fellow DMI scientist Kimber Lew said this new version required some updates to assure it could be produced consistently in more than 7,000 Taco Bell kitchens across the country. They spent nearly two years working with new suppliers and updating the recipe.

“It’s a pretty difficult product to make and it wouldn’t work with how Taco Bell’s kitchens are set up today, which is why it took so long to bring back,” Ciresi said. “Kimber and I put in many hours in our test kitchen formulating the cheese blend inside the shell and evaluating several samples to ensure product consistency.

“It was a long time in the making but it’s really exciting to be able to bring back such an iconic product that is not only good for Taco Bell but is beneficial to our dairy farmers.”

They also are confident the Quesalupa sequel will be very popular with customers.

“When you bite into it, you get that wonderful cheese-pull experience,” Lew said. “You get cheese in every bite.

“The Quesalupa helps to maintain Taco Bell’s place as a leader in innovative menu items. It not only creates buzz around the brand, it also shows that Taco Bell is a hub for tasty, cheesy products that consumers love.”