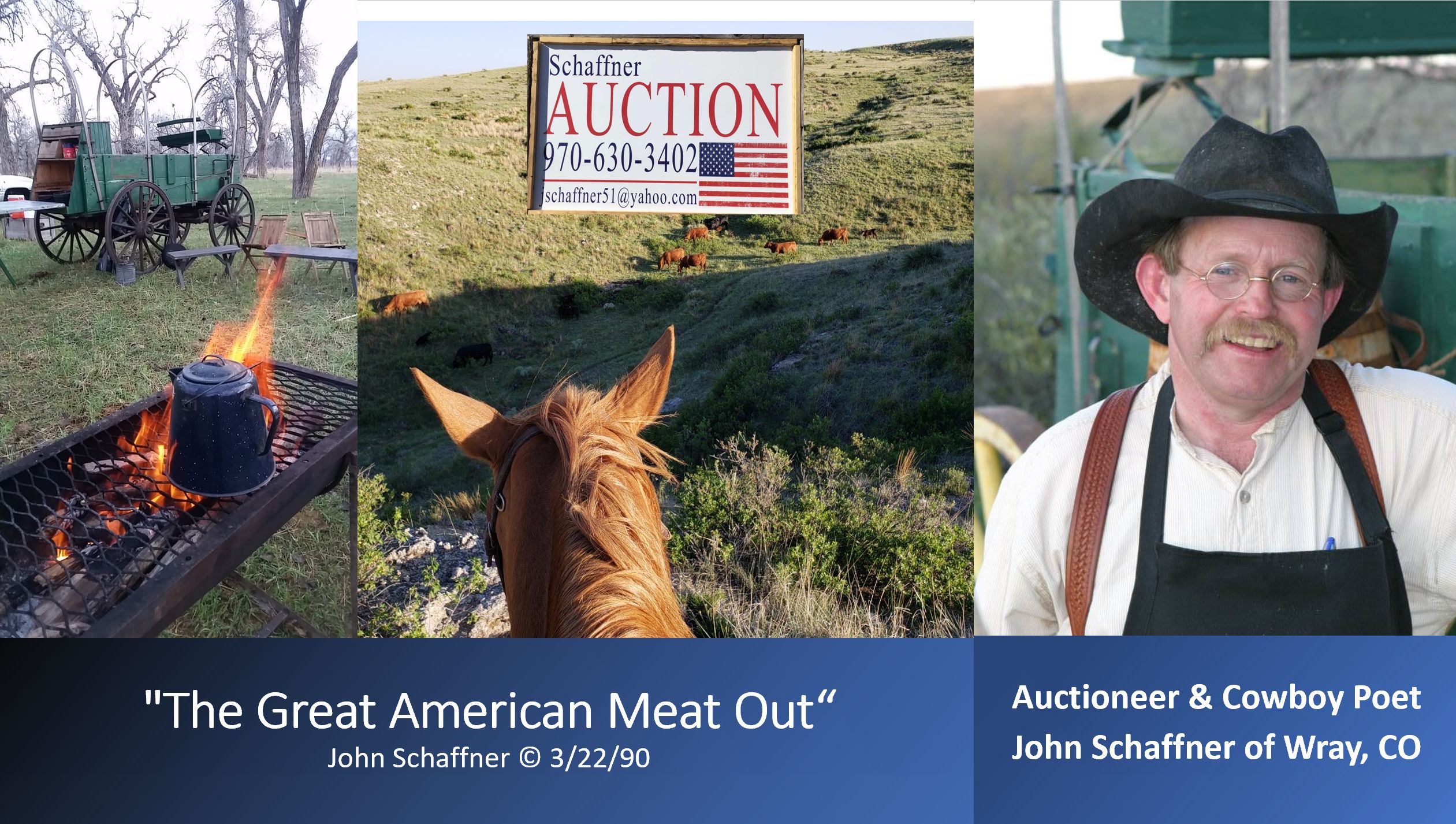 The following poem and audio was sent to The BARN with exclusive permission of John Schaffner, enjoy…

There has been a lot of scuttlebutt going around after Governor Polis, of Colorado declared that March 20th was to be a meat free day in Colorado. It reminds me of a day during calving season back in March of 1990. I was out checking cows in my pickup while listening to Mike Rosen on KOA radio. Some vegetarian lady was talking about The “Great American Meat-Out” promoting pretty much the same thing that Polis is encouraging. I went home that day and wrote the following poem. I sent it to Mike Rosen and heard him recite it on air a few days later. Put another steak on the grill.

Here is that poem in both audio and written form:

I heard the other day about the “Great American Meat-Out”

What in the world is that foolishness all about?

They want to turn my ranch into a tofu farm.

Now to a cowboy that’s cause for alarm. They say they can take soybeans and make imitation beef. But of course, they are the ones who eat seaweed from the Great Barrier Reef.

They say we could feed the world if the ranches were a vegetable garden. But most ranches aren’t the ideal garden spot, I beg your pardon.

I can show you a place where someone tore up pasture to raise a crop.

But it just wasn’t good farm ground, and it turned out to be a flop.

Now, today that ground is all grown up in weeds,

And in no way is it meeting anybody’s dietary needs,

They want to tear up my grass and raise vegetables or some edible seed.

But, the SPCA will be on my back, ‘cause my cows will soon run out of feed.

By the way, how will they fertilize those “organic” crops?‘

Cause when the cow’s gone, so it that pile of “organic” fertilizer she drops.

Vegetarians say beef is bad for the heart,

But my thinking and theirs is miles and miles apart.

I had and old friend who ate meat three meals a day,

And he lived to a ripe old age anyway.If he hadn’t eaten meat he might still be alive.

He died one day, taking care of his cows, at the age of only eighty-five.

Now, how many old vegetarians have you ever seen?

But I can show you lots of old cowboys who are healthy, happy, and lean.