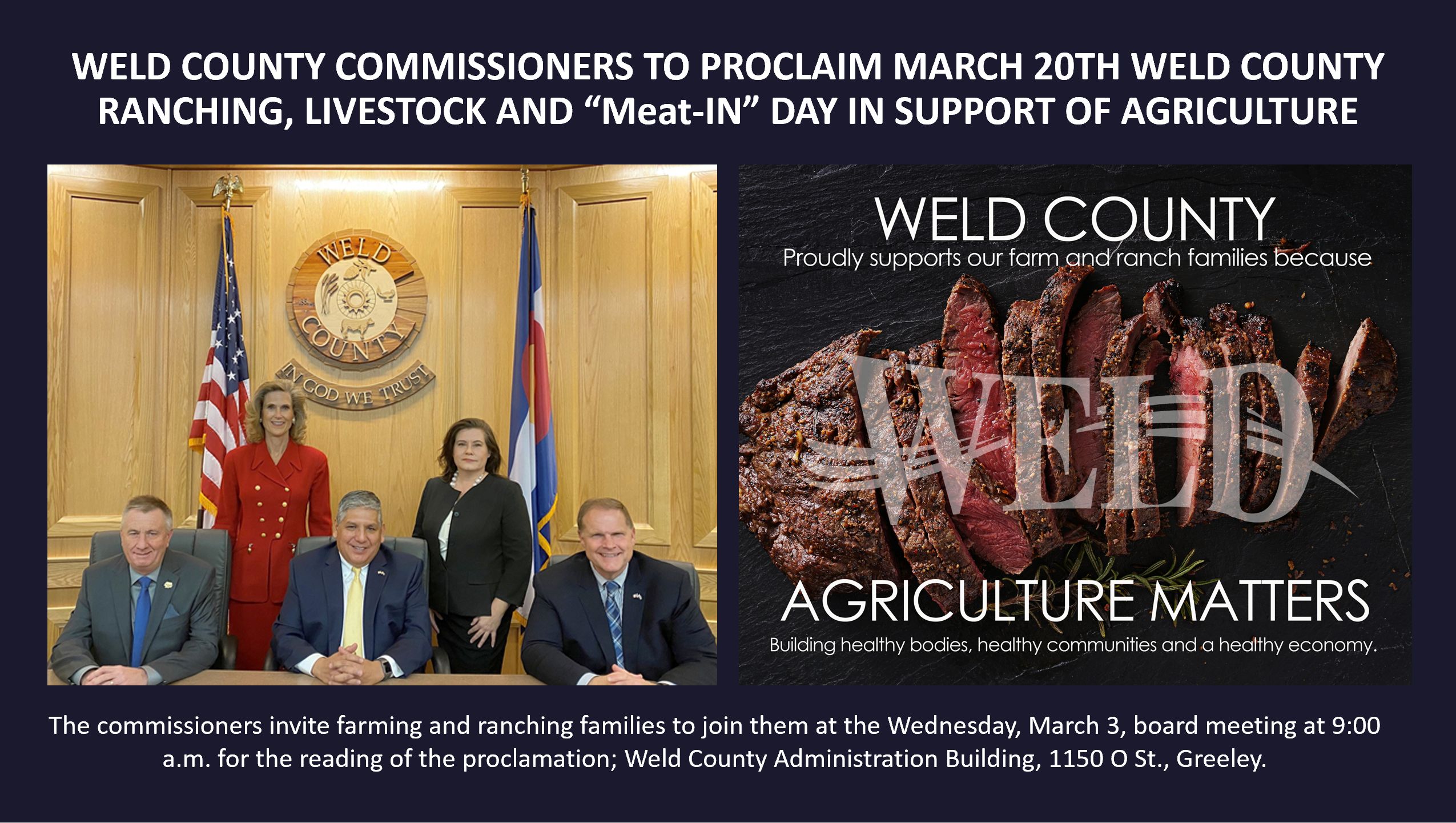 UPDATED MARCH 3, 2021 – More than 30 people attended today’s board meeting in support of agriculture as commissioners proclaimed March 20, 2021, Weld County Ranching, Livestock and “Meat-IN” Day. Agriculture producers in attendance expressed gratitude to the commissioners for supporting a local industry that brings $2 billion a year to the state’s economy (agriculture statewide brings $40 billion annually to Colorado’s economy). Read more about the proclamation at https://www.weldgov.com/…/b_o_c_c_to_proclaim_support…

“When Governor Polis declared March 20 as MeatOUT day, it was a slap in the face to the thousands of ranching and farm families across this state,” said Commissioner Chair Steve Moreno. “It was yet another hit against rural Colorado.”

Weld County has long been the state’s leading county in agricultural products sold, bringing in $2 billion dollars annually. Approximately 85% of that revenue comes from the sale of livestock, poultry and products alone.

“It would have been one thing to say he promotes a plant-based diet,” said Commissioner Mike Freeman. “Instead, he decided to perpetuate broad-based falsehoods that eating meat leads to bad health and animal cruelty. Irresponsible!”

“Once again the Governor is picking winners and losers,” said Commissioner Scott James. “He’s insistent on promoting some businesses at the expense of harming others.”

“I am insulted by the Governor’s actions,” said Commissioner Perry Buck. “My family has a long tradition of agriculture in this county. My friends, neighbors and constituents also have roots deep in agriculture. To dismiss their heritage and their livelihood is unconscionable.”

“Our farmers and ranchers are the original stewards of our environment,” said Commissioner Lori Saine. “To those serving us in one of Colorado’s first industries, this seems like a pre-emptive strike against agriculture.”

The commissioners invite farming and ranching families to join them at the Wednesday, March 3, board meeting at 9:00 a.m. for the reading of the proclamation; Weld County Administration Building, 1150 O St., Greeley.

This board will not disparage any economic engine that supports the residents of this great state, but it will call out dangerous actions by elected officials that risk the economic health, safety and welfare of the people who call Colorado home, not the least of which are the families who work the land, care for the livestock, plant the crops, provide the nourishment for our bodies, and preserve the way of life that is crucial to this state’s and county’s security and success. Learn more online at https://www.weldgov.com/departments/commissioners

Submitted to The BARN by: