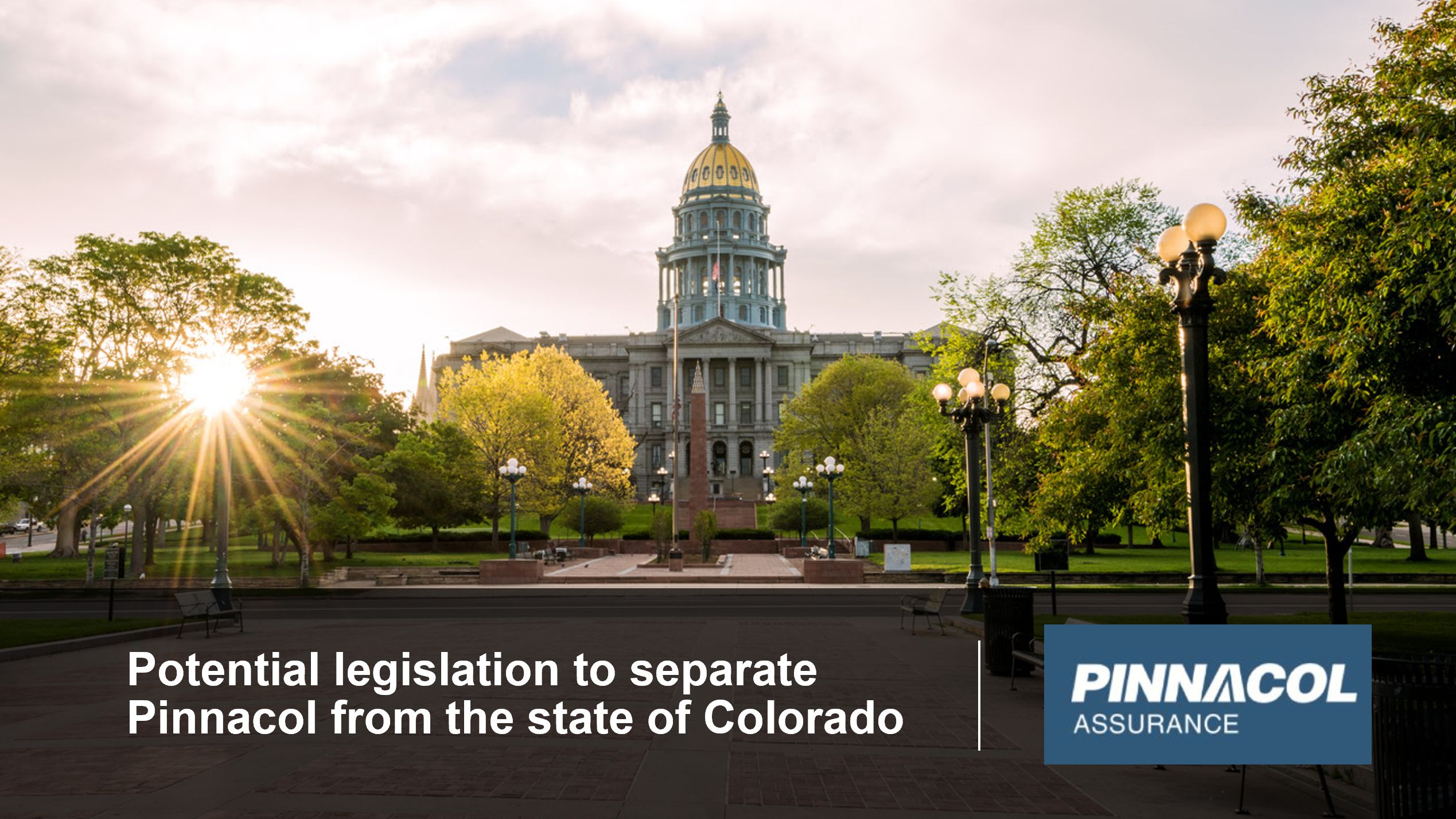 Potential legislation to separate Pinnacol from the state of Colorado

Since 2002, Pinnacol has been a political subdivision of the state, which means that while we are not part of state government, we are also not independent. We are subject to a statute that restricts us to workers’ comp, and only in Colorado; requires us to act as the carrier of last resort, and requires that our employees participate in the Public Employees’ Retirement Association (PERA). In addition, the Governor appoints our board. At the same time, the statute requires us to operate “as” a mutual insurance company, even though we are not independent.
‍

Why is this idea being put forward?

The budget uncertainty created by the COVID-19 pandemic spurred some policymakers to look at Pinnacol’s surplus and propose an arrangement: the state divests its interest in Pinnacol in exchange for a fair payment, and Pinnacol gets full flexibility without being tied to the state.

As a result, Pinnacol has been working with the state to calculate the value of the state’s interest in Pinnacol, and with State Rep. Matt Soper (R-Delta), who will be the prime sponsor of the related bill.
‍

What impact will this have on policyholders?

Policyholders will benefit from a separation in essential ways:

1. Undisputed control of the company when it becomes a mutual insurance company.

Pinnacol’s current statutory restrictions, including a board appointed by the governor rather than elected by policyholders, make control muddy. If Pinnacol separates from the state as a mutual insurance company, by definition the policyholders will be the company’s owners who can then elect directors to steer the company’s direction and act as fiduciaries of policyholder interests.

‍Once Pinnacol is released from the current “one state, one line” statutory constraints, its first priority will be to secure licenses in other states to solve the growing issue of providing easy coverage to employees of Colorado businesses wherever they work. We will also have the ability to offer the “easy button” of bundled coverages to our policyholders. Both of these options will help solve key issues that our agents and policyholders have long indicated are pain points under Pinnacol’s current operating restrictions.

3. A stronger companythat is better able to flex to meet changing customer needs.

What impact will this have on rates and dividends?

We do not anticipate any adverse impact on rates and dividends. As a mutual, Pinnacol will have a board of policyholder owner-representatives that will approve rates and decide on dividends. They will have to pay only premium tax (from which we are currently exempt), which is assessed on our premium revenue at a rate of 1% and will not materially affect rates.

It’s important to understand that with a product like workers’ comp in which benefits are set by statute, the only way carriers can compete is on service and price; thus, there is always an incentive for us to offer the lowest possible rates. We also expect that we will continue to issue general dividends in years when our finances enable us to do so, as we have for the past six years.
‍

What impact will this have on injured workers?

There will be no impact on injured workers. Workers’ compensation benefits are set by statute and are not at the discretion of carriers. Most importantly, Pinnacol has best-in-class satisfaction scores from our injured workers, consistently above 4 on a 5-point scale.

We take pride in the industry-leading safety resources we provide to keep our policyholders’ employees safe, and in the caring protection, we offer injured workers. That commitment won’t change when Pinnacol is a mutual insurance company.
‍

How much money would Pinnacol have to pay to the state?

The valuation by an independent actuarial firm indicates a payment of between $305 and $365 million. That reflects the state’s interest in Pinnacol since 2002 (when the state explicitly relinquished all liability for the company) in the form of our premium tax exemption, the value of our surplus at that time, and an estimate of what the state could have earned if it had sold the company to another carrier at that time. The estimate also deducts the value Pinnacol has provided to the state as the carrier of last resort since 2002.

In addition to paying the state for its interest, Pinnacol will also have to pay PERA for our employees’ pension liability. That will be at least $234 million and could be substantially more, because PERA wants to impose an “early withdrawal” penalty on us, to which they have no legal right. We are pushing back on that.
‍

Can Pinnacol afford to pay that much money?

In order to agree to any final payment amounts, we need an assurance from our rating agency, AM Best, that a payment of this magnitude would not adversely affect our current A- rating with a neutral outlook. That’s an important guarantor for our policyholders and the injured workers we cover because our rating indicates the adequacy of our surplus. If Best indicates that any potential payment would downgrade our rating, we’ll have to renegotiate or walk away.