02-23-21 “A WORLD WITHOUT THE BEEF CHECKOFF” – by Hugh Sanburg, 2021 Chair, Cattlemen’s Beef Board and Colorado Cow-Calf Producer 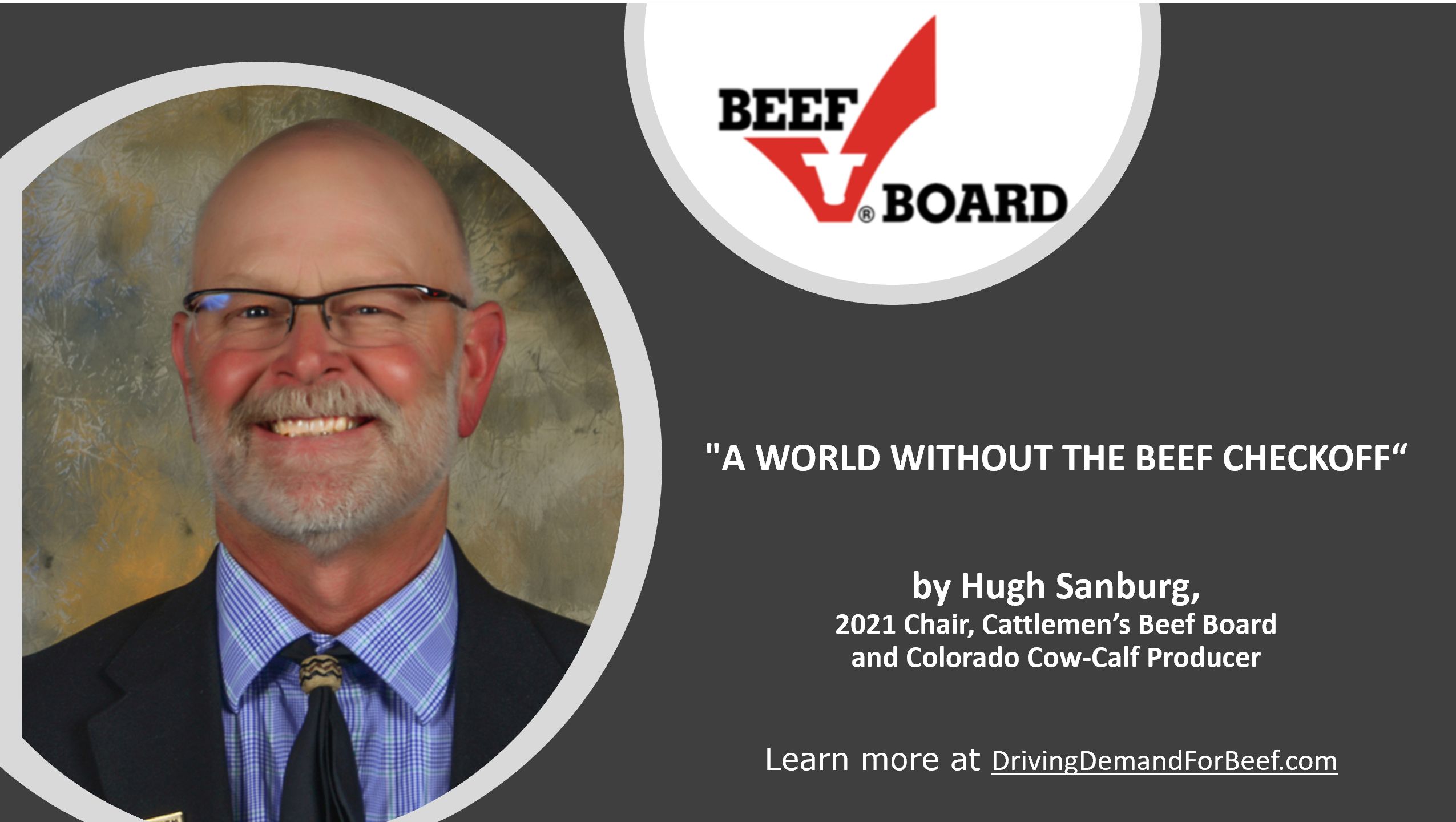 “A WORLD WITHOUT THE BEEF CHECKOFF” – by Hugh Sanburg, 2021 Chair, Cattlemen’s Beef Board and Colorado Cow-Calf Producer

With the holidays now far behind us, few people are giving thought to the cozy evening they likely spent watching “It’s a Wonderful Life.” For those unfamiliar with the 1946 classic film, the main character’s guardian angel reveals what the world would be like without him.

Fast-forward to 2021 and the current chatter surrounding the Beef Checkoff. Certain interest groups have launched a full-court press to – in their own words – call for “an up or down vote on the termination” of the 35-year-old program.

But what would the cattle industry look like without the Beef Checkoff, whose entire mission is beef promotion, research and education? During this lingering pandemic, how much worse might things be without Checkoff-funded efforts driving consumer demand for beef? Could average, family-run operations purchase advertising as effective as “Beef. It’s What’s For Dinner.”? Could they sponsor sustainability or nutrition research to inform consumers about the positive attributes of beef? Could they operate in foreign markets to sell more American beef overseas?

And it’s not just national programming that would vanish with the dissolution of the Checkoff. In 2020, 44 states received Checkoff revenue for local-level beef programming. Of those 44, only 15 currently have their own state Checkoff assessment to keep their work afloat. Stated plainly, if the national Checkoff went away, most state beef councils would have very limited resources for funding their own local beef initiatives.

In the field of physics, there’s a saying: “Nature abhors a vacuum”. Those who argue against the Beef Checkoff have not suggested an alternative to address the void its termination would create. In the 1970s and 1980s, it took producers about ten years and two failed referendum votes to create the Beef Checkoff. Even if a replacement program could be crafted and adopted within a similar timeframe (which is uncertain given the external forces working to weaken or end the animal protein markets), what would happen in the intervening decade without funding for strategic and coordinated promotion, research and education about beef? There’s little doubt that other proteins would step in to fill the void. If the Checkoff were not out there promoting beef, who would?

It’s important to remember that the producer-run Beef Checkoff does not and cannot control the markets. What it can do is support producers in a lot of positive ways – and it does. For example, Checkoff contractors’ efforts have helped increase beef’s protein market share by 4 percentage points since March 2020 (Source: IRI data analytics and market research).

The Cattlemen’s Beef Board’s 2020 Annual Report has just been released and articulates the many creative ways producers’ Checkoff dollars have been hard at work. You can read the report in its entirety at BeefBoard.org, then decide for yourself whether life would truly be better without the Beef Checkoff.

ABOUT THE BEEF CHECKOFF:

The Beef Checkoff Program was established as part of the 1985 Farm Bill. The Checkoff assesses $1 per head on the sale of live domestic and imported cattle, in addition to a comparable assessment on imported beef and beef products. States may retain up to 50 cents on the dollar and forward the other 50 cents per head to the Cattlemen’s Beef Promotion and Research Board, which administers the national Checkoff program, subject to USDA approval.