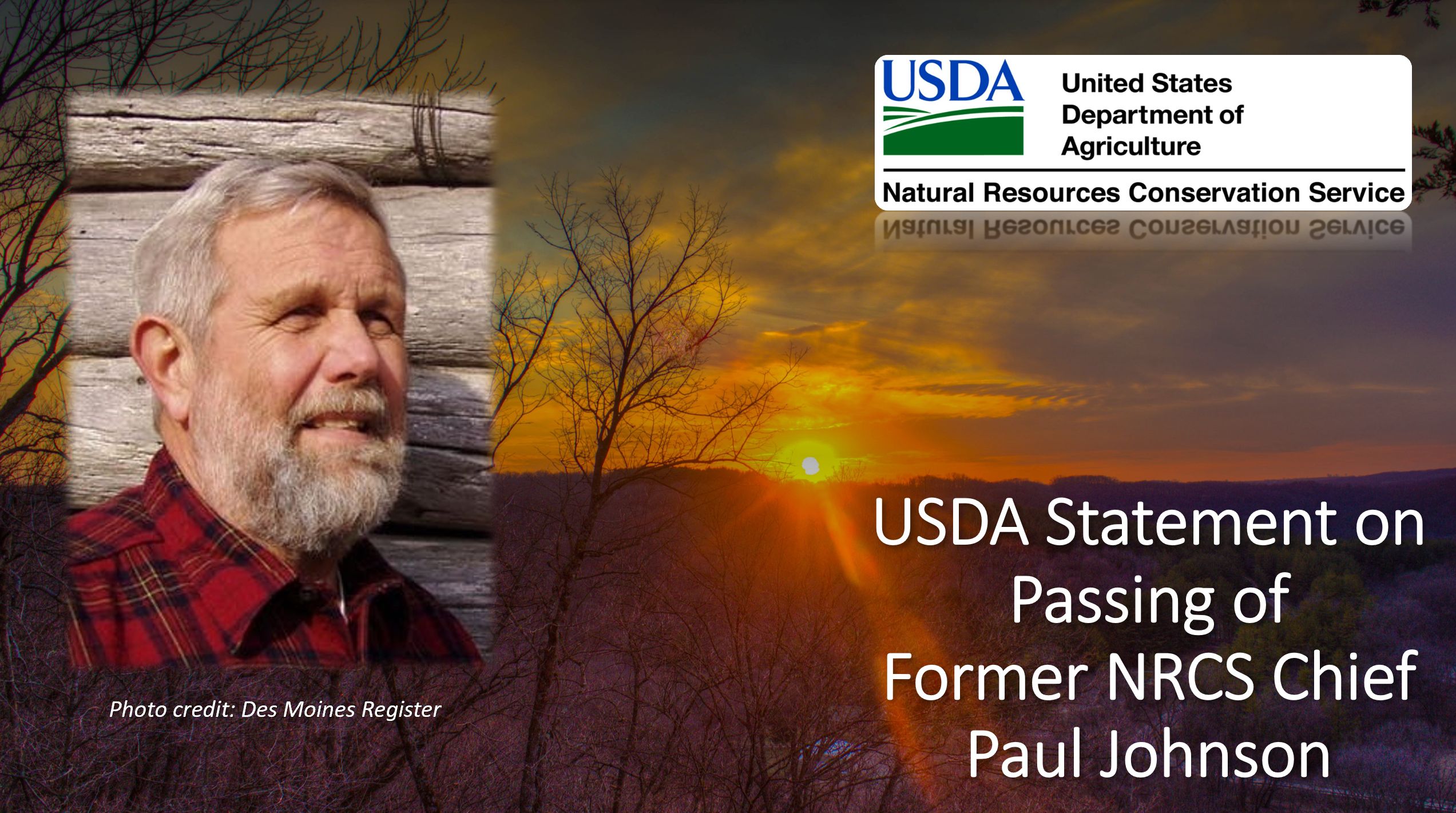 Below is a statement from USDA Farm Production and Conservation Acting Deputy Under Secretary Kevin Norton, on the passing of Paul Johnson, former Chief of USDA’s Natural Resources Conservation Service (NRCS) from 1994 to 1997.

“Chief Johnson made incredible contributions to conservation in our country, both nationwide as chief of NRCS as well as in his home state of Iowa. Paul was a visionary, leading the agency through its growth from the Soil Conservation Service to the NRCS, which had a broader mission focused on conservation of all natural resources on private lands. He was also credited with expanding available conservation programs, including the Environmental Quality Incentives Program, which today continues to serve as the agency’s flagship program that provides resources to help farmers and ranchers bring to life the conservation plans for their working lands. We will keep his family and friends in our thoughts and prayers, and we will continue to cherish Paul’s many contributions to the conservation movement.”

Farmer, legislator, public servant, educator, and tireless advocate for conservation, former NRCS Chief Paul Johnson died on February 15, 2021, he was 79. Born June 10, 1941, Chief Johnson grew up in rural South Dakota and earned a BS and MS in forestry from the University of Michigan. In the 1960s, he served as a Peace Corps volunteer in Ghana and taught forestry at the University of Michigan and in the Ghana Forest Ranger School.

Johnson married Pat in 1965, the couple raised three children: Eric, Andrew and Annika. The Johnson family has owned Oneota Slopes Farm outside Decorah, Iowa since 1974. In the 1996 NRCS publication, America’s Private Lands, A Geography of Hope, Chief Johnson wrote, “Our farm, our neighbors’ farms, and all other private land comprise a majority of the American landscape. As we use our land, we paint our individual and community portraits on the land. Done well, those portraits can be a source of pride.” Situated in the state’s scenic Driftless Area, the Johnson farm stands as a portrait of agriculture in harmony with the environment and a testament to a man who suited his actions to his words.

Elected to the Iowa State Legislature three times from 1984 to 1990, Jonson co-authored the state’s 1987 Groundwater Protection Act, the 1989 Resource Enhancement and Protection Act (REAP) and the 1990 Iowa Energy Act. In 1993, President Clinton asked Johnson to serve as the Chief of the USDA’s Natural Resources Conservation Service, a post he held from 1994-1997. After his time in Washington, Chief Johnson returned to Iowa to serve as the Director of the Iowa Department of Natural Resources form 1999-2000. A tireless advocate for conservation, Chief Johnson served on numerous foundation boards including the Aldo Leopold Foundation.

As leader of the NRCS, Chief Johnson helped develop and implement the conservation title of the 1996 Farm Bill. He was instrumental in consolidating several voluntary, conservation assistance programs into the Environmental Quality Incentive Program (EQIP) which remains the agency’s premier financial assistance program supporting agriculture and environmental quality. Chief Johnson also implemented the Wildlife Habitat Incentive Program to help landowners develop and improve high quality wildlife habitat for species of local and national significance. Under Chief Johnson’s tenure, the Soil Conservation Service became the Natural Resources Conservation Service. Chief Johnson’s conservation philosophy served as a guidepost for an agency grappling with serving an American public increasingly disconnected from working the land. In Geography of Hope, Chief Johnson called for Americans to think about the nation’s farms as more than sites for commodity production, but as critical, national resources instrumental to the nation’s economic and environmental health. For the NRCS, Chief Johnson’s inspiring call to remember the deep connections between America’s private farm, ranch, and forest lands and the health and prosperity of the whole nation is a lasting reminder to employees that the agency’s conservation work is of vital, national importance.

05-13-21 U.S. Department of Education Announces 161 Students from Across the Country As 2021 U.S. Presidential Scholars

05-13-21 U.S. Department of Education Announces 161 Students from Across the Country As 2021 U.S. Presidential Scholars