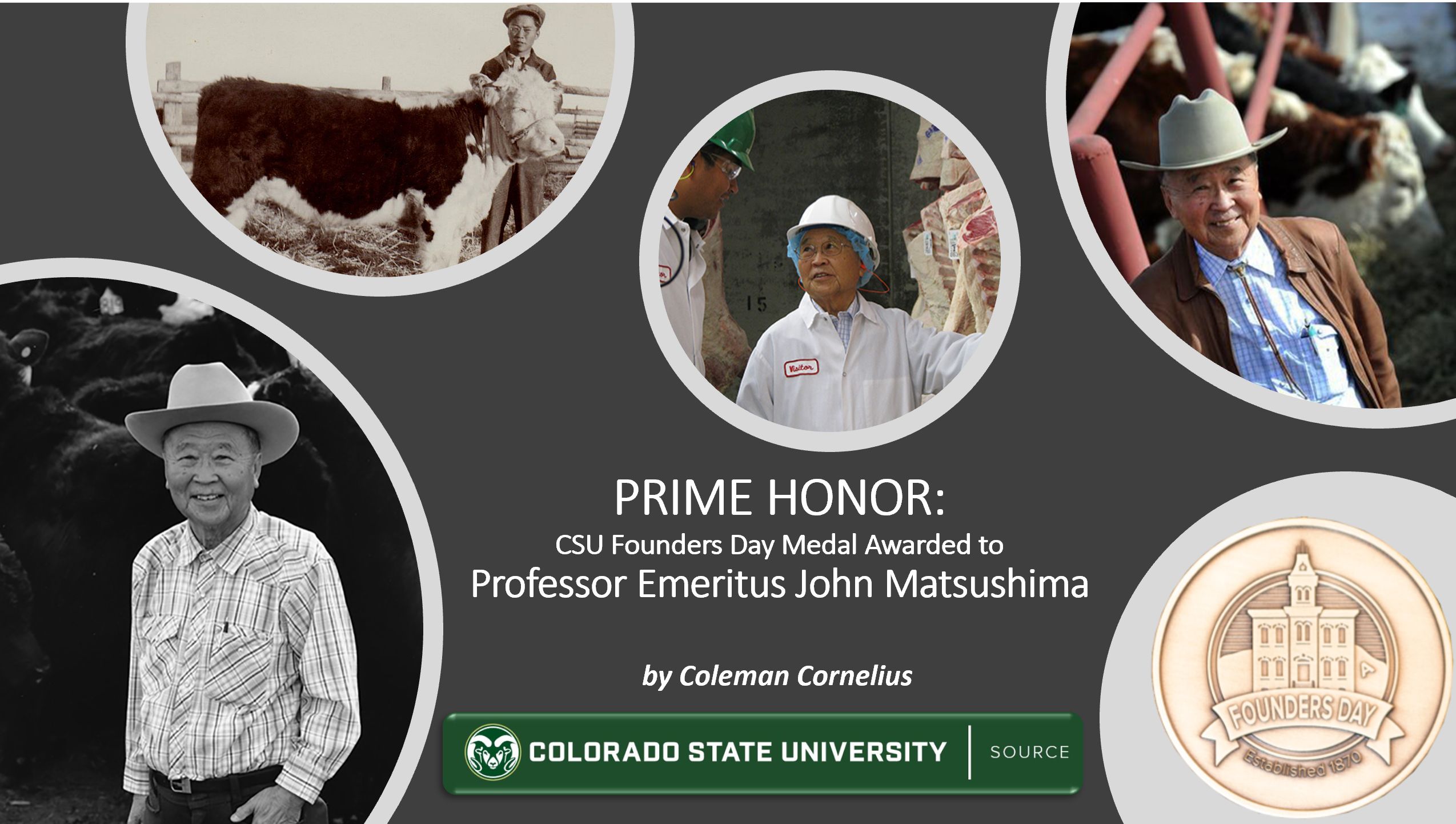 This year, Founders Day at Colorado State University will be a double birthday celebration.

To help observe the 151st anniversary of its founding, CSU will bestow the 2021 Founders Day Medal on Professor Emeritus John Matsushima, a legendary scientist in beef-cattle nutrition whose innovations have influenced the global food system and exemplify the university’s land-grant mission.

The medal is among several significant honors Matsushima has received coinciding with his 100th birthday at the end of 2020. CSU President Joyce McConnell and Vice President for University Advancement Kim Tobin shared news of the Founders Day award in a video call with Matsushima last week.

“We are thrilled to honor Dr. Matsushima, who has been such a vibrant force in creating and sharing knowledge that has benefited the agricultural industry and consumers around the world,” McConnell said. “He embodies our commitment to our land-grant mission and has been a revered figure in our campus community. We are delighted to present Dr. Matsushima with one of the University’s highest honors.”

“I’m surprised – I feel very honored,” Matsushima said of the recognition. He spoke from his longtime home in Fort Collins, where he lives with the support of his daughter, Nancy Oliver.

Each year, the institution marks the date of its founding – Feb. 11, 1870 – when the territorial governor of Colorado signed legislation to formally establish the college that would become Colorado State University.

From the beginning, CSU’s land-grant mission has centered on providing promising students from all backgrounds with access to excellent education and the expanded opportunities that arise from it. Along with this calling, the university was designed to conduct essential research – and to share its discoveries and innovations through outreach that stimulates the economy and improves quality of life for people in the state, nation and world.

The Founders Day Medal annually honors a luminary from CSU’s wide circle of friends and supporters for unmatched contributions that have invigorated the institution’s worldwide impact.

Personification of the land-grant mission

Matsushima not only has helped CSU fulfill its land-grant mission; he personifies it.

He is the son of Japanese immigrants, born in Denver and raised on a family farm in Platteville, Colorado. Matsushima started raising cattle as a member of 4-H and FFA and attended Colorado A&M, now CSU, to earn a bachelor’s degree in in animal husbandry in 1943 and a master’s degree in animal nutrition in 1945. He battled bigotry and scraped by financially on his path to becoming a pioneer in global beef-cattle feeding.

His work began with boyhood curiosity. “I noticed that when cattle munch on grass, they eventually turn that green grass into red meat. How does that happen?” he recalled in a phone conversation last week.

He worked at CSU for 30 years, retiring to the role of professor emeritus in 1992. During his career, Matsushima partnered in research with the state’s top commercial cattle feeders and beef processors; his findings and innovations spurred the dominant cattle industry in Colorado and the nation by substantially boosting animal health, efficiencies, pricing and meat quality. He often traveled internationally to share knowledge and helped open export markets to U.S. beef.

“I’ve always used the model that food plus water equals life. Those three words are very powerful. Those three things encouraged my research in order to improve the life span of human beings,” Matsushima said.

During his time at CSU, Matsushima became a dedicated Rams fan and co-founded CSU’s annual Nutrien Ag Day, a huge game-day barbecue during football season (featuring beef, of course). He devoted himself to community service through the Rotary Club of Fort Collins. He held longtime leadership roles with the National Western Stock Show; for that and other contributions, he was named 2013 Citizen of the West, among many remarkable career honors.

Even more, Matsushima has taught an estimated 10,000 students studying agricultural sciences. Hundreds of friends and former students sent cards and emails when Matsushima celebrated his 100th birthday in late December.

“I enjoyed teaching very much,” he said. “Of course, when you teach, you don’t have students with the same capabilities. In some cases, I had more than 150 students in the classroom and I created an alphabetical seating chart and assigned seats so I could remember them. I moved some students toward the front if they needed to see better or hear better. I wanted to make sure every student had the capability to learn.”

While the ongoing coronavirus pandemic prevents a celebratory gathering on campus this year, Matsushima joins a group of remarkable individuals who have received the Founders Day Medal from Colorado State University.