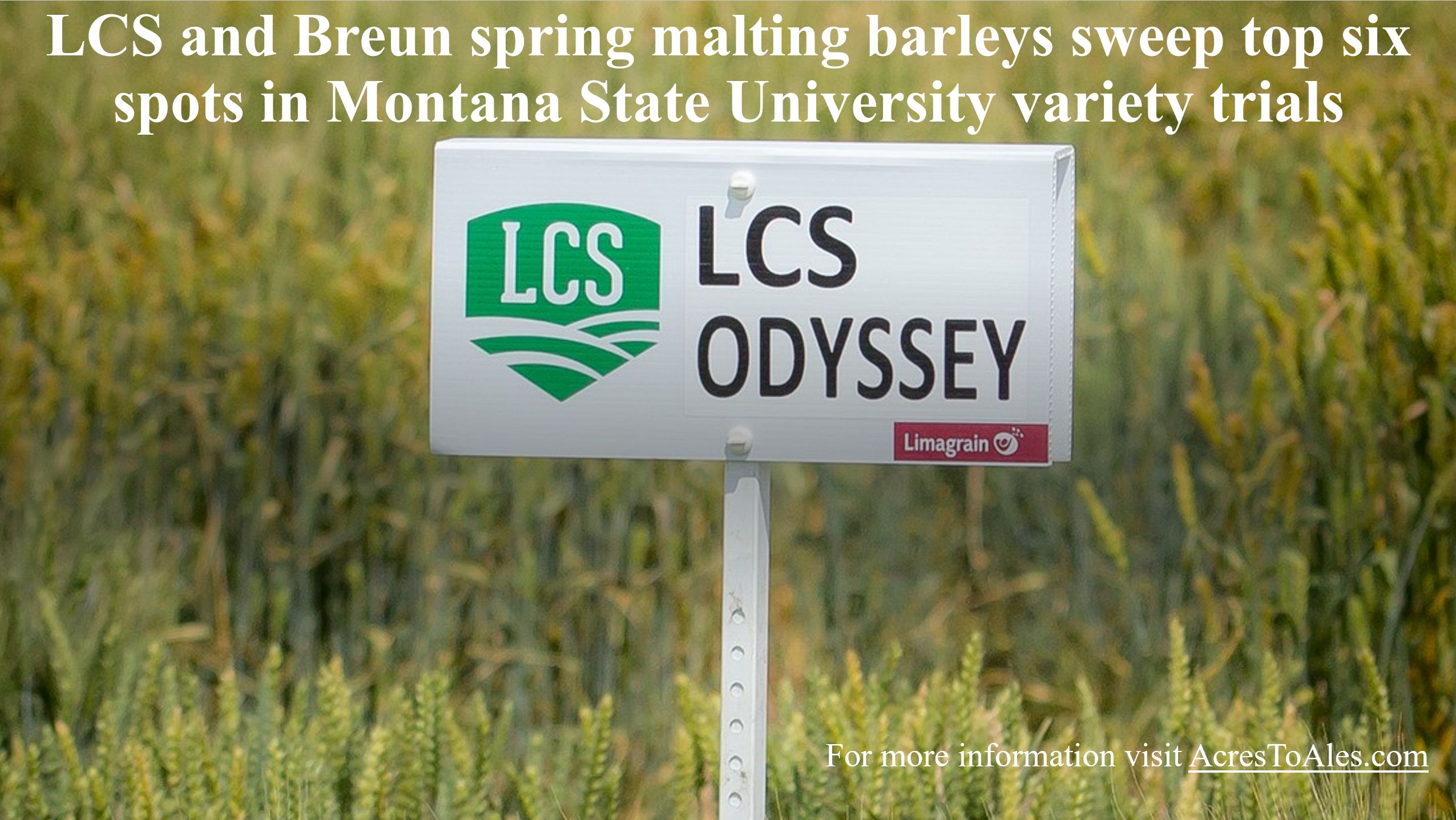 LCS uses barley genetics from around the world to broaden its portfolio. Parent company Group Limagrain has cereal breeding operations on six continents, including Limagrain UK, known for breeding non-glycosidic nitrile (GN) producing barleys, and Limagrain Nederland, known for developing earlier maturing malt barley lines. LCS also has a strategic partnership with Breun, one of the leading barley breeders in Germany, and is proud to bring high-quality Breun Craft varieties to market in the United States.

The European barleys from Group Limagrain and Breun are put through extensive testing and trialing on U.S. soil by LCS. Thus far, the varieties have shown excellent adaptation to major barley growing regions, with the short stature and straw strength needed to carry a high yield through to harvest. Not all European genetics are so successful, however.

“Typically, small grain germplasm doesn’t transplant all that well across continents,” explains Dr. Blake Cooper of American Farm Seed Services. LCS has retained Cooper to help grow its malting barley program. “However, I’ve been impressed by how well some of the most recent Group Limagrain and Breun spring malting barley germplasm has traveled. The genetics are so advanced in terms of their yield potential, agronomics and disease resistance that they are consistently at the top of experimental trials here in North America.”

Cooper has seen his share of barley genetics, with over a decade of experience as a malt barley breeder, including several varieties that are still prominent in U.S. markets. “Based on the 2020 data from Montana, LCS and Breun varieties seem to have a leg up on most domestic lines, including some of my own barley releases, which were used as check cultivars in the trials. Originally selected for the cooler, longer-season European climate, the LCS and Breun lines behave as ‘full-season’ maturity lines compared to most domestic checks. But they have such greater inherent yield potential, and the agronomics to match, that they seem to win out even under situations that would tend to favor earlier maturity cultivars.”

Two-row spring malting barleys LCS Odyssey and LCS Genie are already essential ingredients in award-winning craft brews and spirits across the country. Both are recommended by the American Malting Barley Association (AMBA) and deliver consistently high malt extract. LCS Odyssey offers farmers reliably high yield and excellent tolerance to cereal cyst nematode, and it’s a favorite of distillers and brewers alike for its lack of GN. LCS Genie is a craft brewing stalwart, with fine grind extract of 81.5+% d.b. and beta-glucan content under 100 ppm.

Two-row winter malting barley BC Violetta also has AMBA’s seal of approval. Particularly well adapted to growing conditions in the eastern United States, BC Violetta is a big yielder, has excellent test weight and is ideal for double cropping. Plump kernels and consistent extract make it a top choice for maltsters.

New malting barley genetics: The best is yet to come

“Our latest spring malting barley varieties are looking to be even better performers than LCS Odyssey and LCS Genie in the U.S. — better in the malthouse and for brewers, as well as for farmers. We wouldn’t be pursuing them otherwise,” asserts Gaines, noting that all new varieties have already passed the stringent quality standards of the European Brewery Convention.

Topping the MSU 2020 statewide trials in yield, BC Leandra has short stature, good stability and tolerance to powdery mildew and rust. The new line is known in Europe for its high quality, balanced malt, low beta-glucan and very high alpha-amylase activity. BC Leandra also brings a new and relatively unknown characteristic to the United States: Flexi-Malt®, which provides significant efficiencies during the steeping process and can reduce malthouse energy costs by 10 to 20 percent.

BC Ellinor has a medium-early maturity and tolerance to powdery mildew and rust. It was awarded CBMO France Brewing Quality A and is a balanced malt with high extract. BC Ellinor’s malting profile fits very strongly with current standards provided to barley breeders by AMBA.

Following a step behind in terms of the commercialization timeline is LG Diablo, one of the most exciting lines currently available in Europe. LG Diablo is one of the most sought-after new varieties globally due to very high levels of extract and zero production of GN.

Past performance and MSU trials are only the beginning of the vetting process for new LCS and Breun varieties. “We’ll be retesting these lines as well as other genetics across the United States in 2021 to target the growing regions where each has their greatest potential,” says Cooper. “Seed stock is available for testing now, and people will be able to look at them in the field this year.”

Limagrain Cereal Seeds (LCS) is dedicated to developing malting barleys that perform well on the field and in the malthouse, giving brewers and distillers the building blocks for exceptional beers and spirits. Through the exchange of elite global genetics from parent company Group Limagrain and partner Breun, LCS provides U.S. farmers, maltsters, brewers and distillers access to the best two-row malting barley lines in the world.

Saatzucht Josef Breun has been developing barley since 1906. Now in its fourth generation, the family-owned company has breeding stations in Germany and abroad. Subsidiary Breun Seed distributes elite Breun genetics worldwide and partners with LCS to bring U.S. malting barley seed to market.