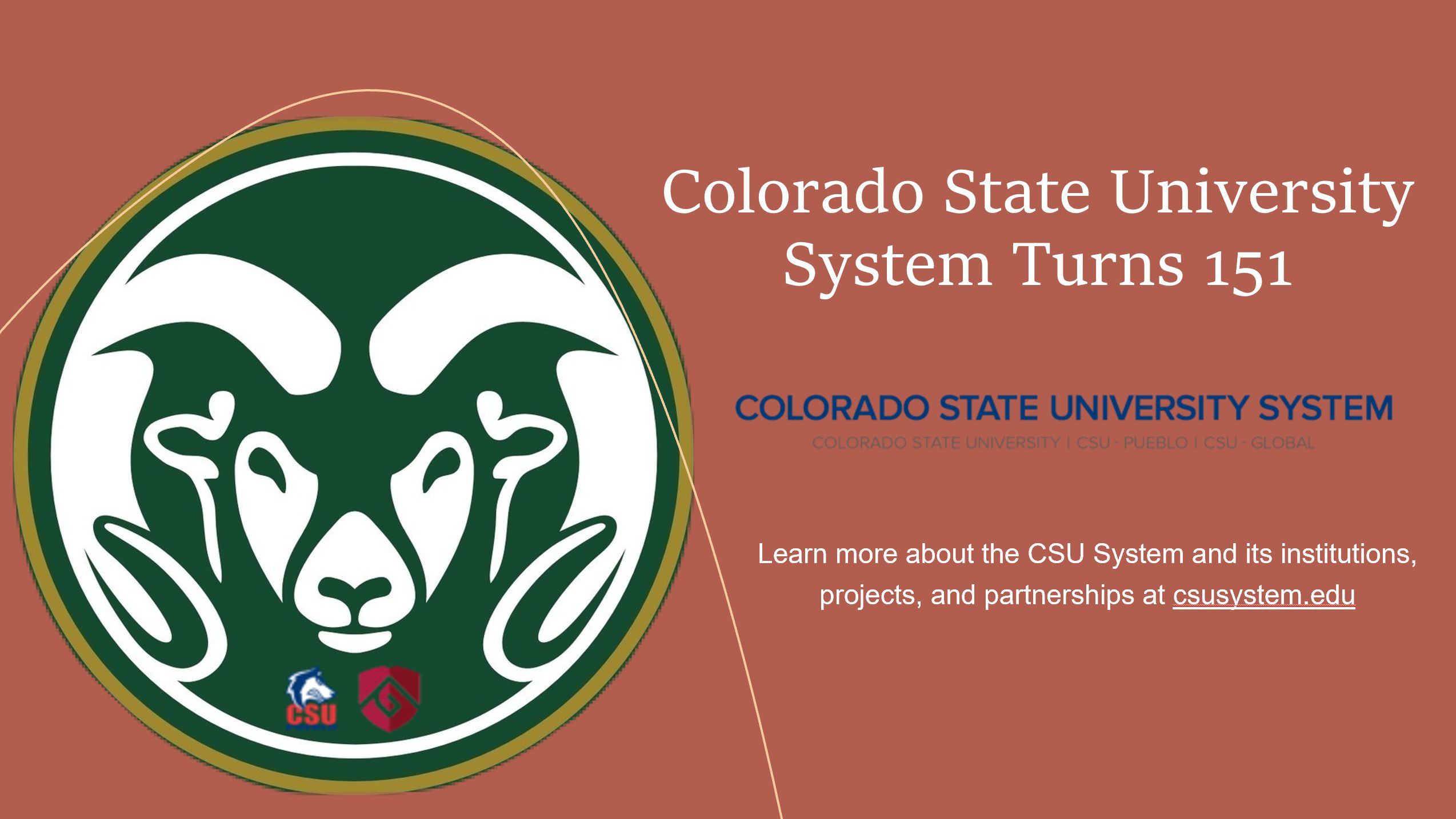 Today, the Colorado State University System celebrates 151 years of service to Colorado. A System with three distinct universities (CSU Fort Collins, CSU Pueblo, and CSU Global), the CSU System is unified by its community focus, statewide engagement, and global impact. The campuses each focus on access to education, and each has a different area of focus, allowing the CSU System to meet the needs of all types of learners across the state.

As part of this year’s celebration, the flagship Fort Collins campus will award its Founders Day Medal to Professor Emeritus John Matshushima, a man whose science revolutionized the global cattle industry and just recently celebrated his 100th birthday.

CSU Fort Collins became the state’s land grant university on February 11, 1870, thanks to Lincoln’s earlier signing of the Morrill Act creating a system of universities nationwide that focused on accessible education and societally important research. CSU Pueblo has been serving the state since 1933, and today is a federally designated Hispanic Serving Institution with a regional focus on preparing students for work in economically important industries. CSU Global joined the CSU family of universities in 2007 — the first fully accredited, fully online state university in the country. The System continues to build out what a land grant mission looks like in the 21st Century, bringing large-scale initiatives to life throughout the state and internationally.

Earlier this week, the CSU System released its first-ever economic impact report, quantifying how the three campuses contribute to the state and beyond, including the following:

Each year, the CSU Fort Collins campus awards a Founders Day Medal to someone who has had a transformative and lasting impact on the University and its success. The 2021 Founders Day Medal recipient is Professor Emeritus John Matsushima, a legendary scientist in beef-cattle nutrition whose innovations have influenced the global food system and exemplify the university’s land-grant mission. Matsushima partnered in research with the nation’s top cattle feeders and beef processors to improve animal health, efficiencies, pricing and food quality for consumers.

His own story personifies CSU’s land-grant mission. The son of Japanese immigrants, he grew up on his family farm in Platteville, south of Greeley, Colorado, and raised Hereford steers as a member of 4-H and FFA. He attended Colorado A&M, now CSU, to earn a bachelor’s degree in animal husbandry in 1943 and a master’s degree in animal nutrition in 1945. He battled racism and bigotry, particularly as the U.S. entered the second World War, and he relied on the support of  his college friends as he scraped by financially on his path to becoming a pioneer in global beef-cattle feeding. After Matsushima earned his Ph.D. at the University of Minnesota, he taught for a time at the University of Nebraska, then returned to CSU in 1961. Matsushima also founded CSU’s Ag Day in 1981.

The medal is among several significant honors Matsushima has received over his career and coinciding with his 100th birthday at the end of 2020. He previously was named the National Western Stock Show’s Citizen of the West in 2013.

Big initiatives and big plans for the CSU System

About the Colorado State University System

To stay in touch with events and activities of the CSU System, subscribe to the free monthly Chancellor’s Newsletter here.