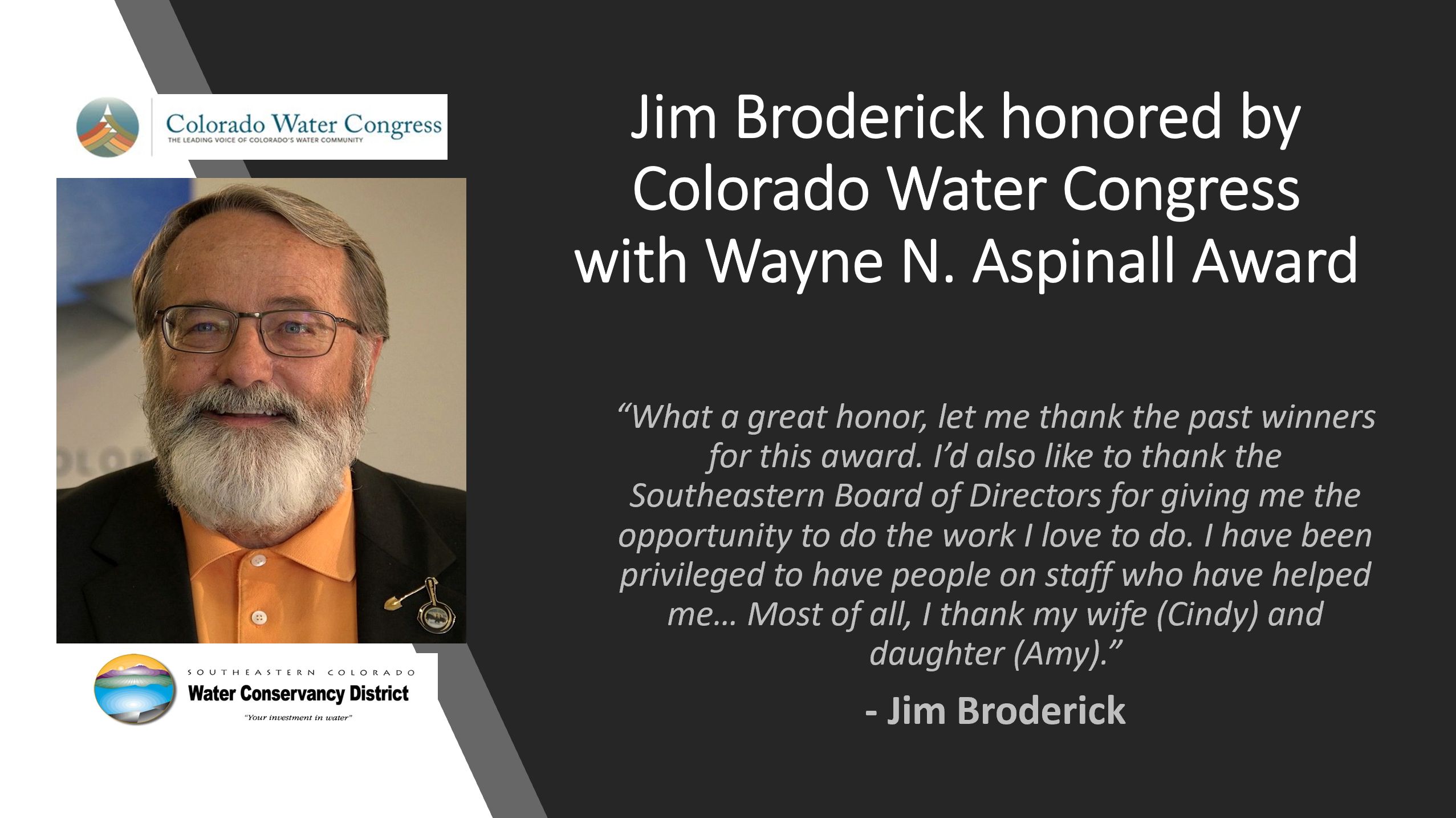 Jim Broderick, a Pueblo native who has spearheaded regional and state water projects for nearly two decades, was given the top honor at the 2021 Colorado Water Congress convention.

“What a great honor,” Broderick said, after being surprised by the award. “Let me thank the past winners for this award. I’d also like to thank the Southeastern Board of Directors for giving me the opportunity to do the work I love to do. I have been privileged to have people on staff who have helped me… Most of all, I thank my wife (Cindy) and daughter (Amy).”

“I couldn’t be more honored to present this award,” said Christine Arbogast, a water consultant who received the Aspinall Award in 2020. She grew up in Pueblo at the same time as Broderick, and works for the Southeastern District.

Southeastern Board President Bill Long praised Broderick for advancing the Excess Capacity Master Contract for storage in Pueblo Reservoir, hydroelectric power at Pueblo Dam, and the Arkansas Valley Conduit, as well as other District improvements.

Eric Wilkinson, retired executive director of the Northern Colorado Water Conservancy District and an Aspinall Award recipient himself, praised Broderick for his service to Water Congress.

Also on hand for the presentation were Southeastern Board Members Alan Hamel (a 2012 Aspinall recipient), Kevin Karney and Seth Clayton, who were gathered for a presentation on AVC immediately following the Aspinall presentation.

Broderick said he had no idea he was there for anything other than the AVC presentation.

Although about 250 people were in the virtual meeting at the time, only a few were in the Zoom meeting room with Broderick. Normally, there would be a larger crowd, but because of COVID-19 restrictions, only a few presenters were on-screen during the presentation.

Broderick was named executive director of the Southeastern Colorado Water Conservancy District on November 1, 2002. The Southeastern District is the state authority for the Fryingpan-Arkansas Project, which was created by an Act of Congress in 1962. Its primary purpose is to deliver a supplemental supply of water to the Arkansas River basin from the upper reaches of the Colorado River.

At the helm of the Southeastern District, Broderick completed the Excess Capacity Master Contract for storage in Pueblo Reservoir. The contract enables stakeholders to store non-Project water in Pueblo Reservoir for 40 years when space is available. The Master Contract covers environmental compliance issues which otherwise would require annual analysis, and firms up storage options for participants.

Broderick oversaw the construction of a 7.5-megawatt hydroelectric power plant at Pueblo Dam under a Lease of Power Privilege with the Bureau of Reclamation. The facility opened in 2019 and the Southeastern Board voted to name the James W. Broderick Hydropower Plant in his honor. The plant provides a source of clean energy, which is being purchased by the city of Fountain and Fort Carson (through Colorado Springs Utilities).

Broderick revived the Arkansas Valley Conduit project, meeting with stakeholders for a decade, shepherding the AVC through the NEPA process, working with Reclamation to develop AVC, and tirelessly urging Congress to fund the AVC. Those efforts paid off in 2020 with the first federal appropriation for construction of the AVC, which will begin by early 2022. The AVC will be a 130-mile long pipeline that will provide fresh drinking water to 40 communities with 50,000 people east of Pueblo.

Broderick in 2020 completed a two-year term as President of the Colorado River Water Users Association, a non-profit, non-partisan organization that provides a forum to exchange ideas and perspectives on the Colorado River. Its members include Arizona, California, Colorado, New Mexico, Nevada, Utah, Wyoming, and the Ten Tribes Partnership. The group also works closely with Mexico. During his tenure at the helm, the seven states reached a Drought Contingency Plans agreement that describes how states will operate if there is a shortfall of water on the Colorado River basin.

Broderick is past president of the Colorado Water Congress and Arkansas Basin Roundtable. He is also a member of the National Water Resources Association and Family Farm Alliance.