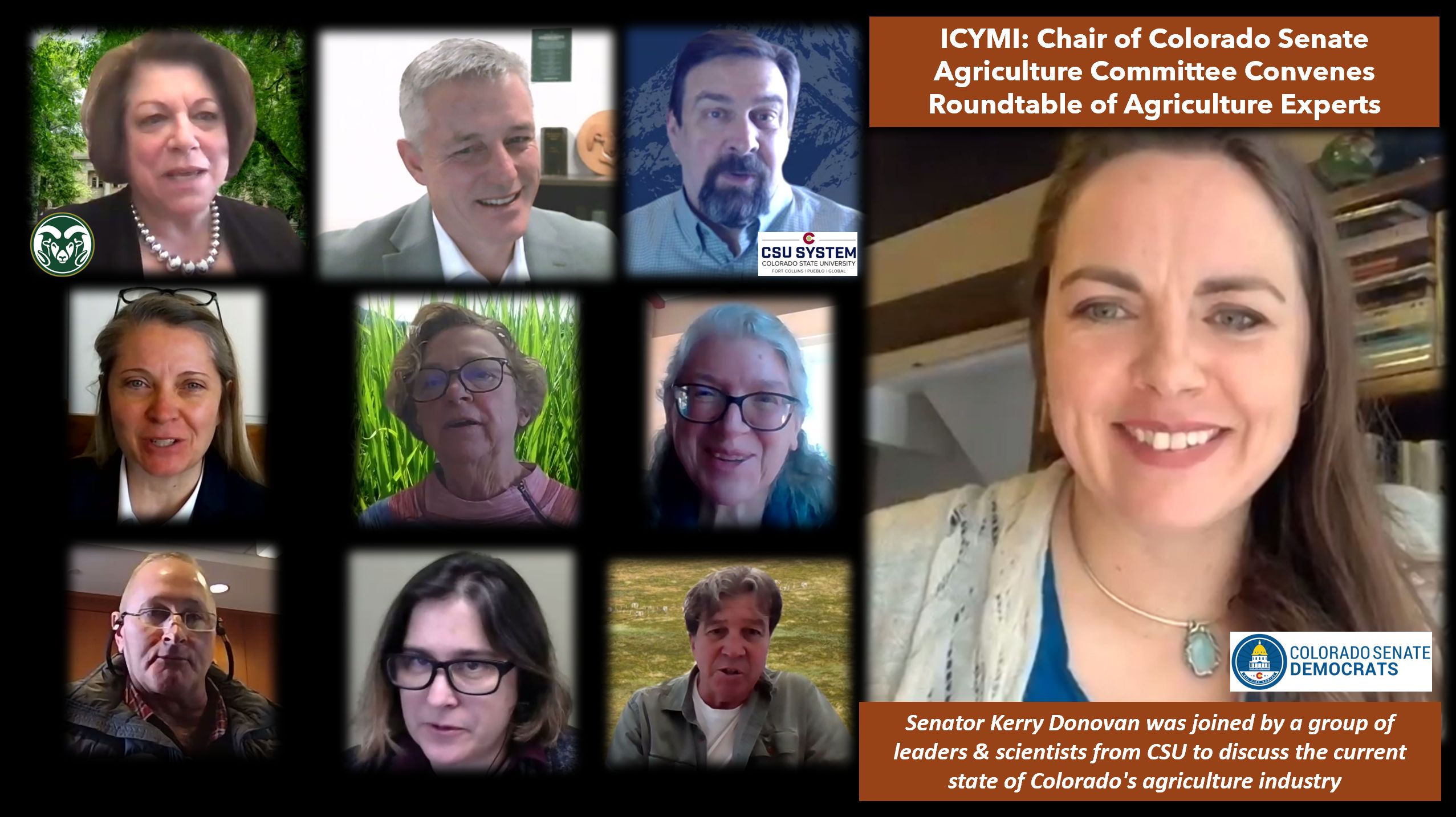 Sen. Kerry Donovan was joined by a group of leaders and scientists from Colorado State University to discuss the current state of Colorado’s agriculture industry

Denver, CO — On January 25, 2021, Senator Kerry Donovan, D-Vail, held a virtual roundtable conversation with administrators and researchers from Colorado State University to discuss some of the most pressing issues Colorado’s agriculture industry is facing as part of her statewide agriculture listening tour.

“Collaboration between the science and agriculture communities has always been a cornerstone of Colorado’s economic success,” said Senator Donovan, Senate Chair of the Agriculture Committee. “Our farmers and ranchers have always taken immense pride in their role in feeding not just this state, but the country and the world. That wouldn’t be possible without innovative ideas and input coming from experts whose research propels the industry forward, and helps preserve the land for generations to come. As legislators, we can help to facilitate that collaboration and make sure that our work aligns with fact and scientific best practices.”

Agriculture is a significant economic driver in Colorado, contributing $41 billion to the state’s economy and employing nearly 173,000 people according to the Colorado Department of Agriculture. Multiple challenges, however, threaten the future success of the industry in Colorado and across the country – scientists and students at CSU have taken an active role in ensuring that agriculture remains a safe, profitable and sustainable industry for generations to come.

Throughout her listening tour, Senator Donovan has repeatedly heard similar concerns from farmers and ranchers across Colorado and hopes to use the information she learns in her discussions with experts to raise awareness of the issues and bring them to the forefront of the legislature’s policy agenda this session.

ABOUT KERRY DONOVAN:
Senator Donovan currently serves as the Senate President Pro Temp. She began her service in the State Senate in 2015. She has previously served as a Vail Town Councilwoman and as Director of Academics at the Vail Ski & Snowboard Academy. Senator Donovan also runs the Copper Bar Ranch located in Edwards. She serves on the Senate Agriculture Committee and the Senate Local Government Committee. She can be reached via http://www.donovanforsd5.com and by phone at 303-866-4871.