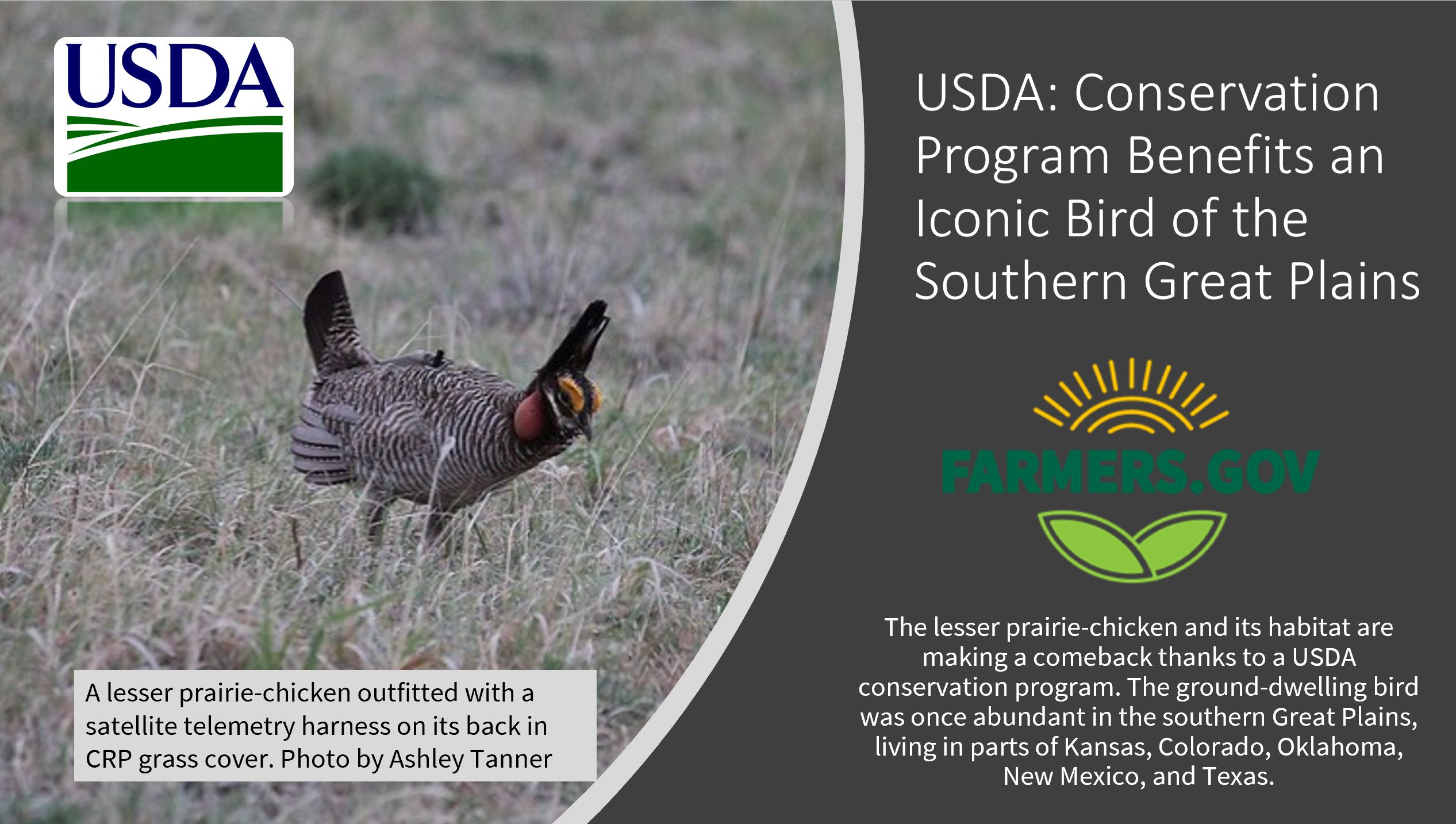 The lesser prairie-chicken and its habitat are making a comeback thanks to a USDA conservation program. The ground-dwelling bird was once abundant in the southern Great Plains, living in parts of Kansas, Colorado, Oklahoma, New Mexico, and Texas. But over the past 150 years due to human migration and settlement, the lesser prairie-chicken population has declined by more than 90 percent, and its range has shrunk by over 80 percent.

The main threat facing the lesser prairie-chicken is the loss of habitat needed for survival caused by converting prairie to cropland, livestock overgrazing, oil and gas development, and building roads and power lines.

An Oklahoma State University study recently found that land enrolled in the Farm Service Agency’s Conservation Reserve Program (CRP) improves and increases lesser prairie-chicken habitat by providing large areas of grasslands and grassland connectivity. The birds were found to rarely move more than 0.3 miles to or from roost sites, and at the county scale, the presence of CRP appears to increase habitat suitability and roost-site accessibility. The study was summarized in a recent Natural Resources Conservation Service (NRCS) Conservation Insight (PDF, 1.2 MB).

Funded by the NRCS Conservation Effects Assessment Project (CEAP) Wildlife Component, the study investigated how CRP acreage influences lesser prairie-chicken habitat suitability and the birds’ use of the land. The researchers placed satellite telemetry harnesses on the backs of 104 lesser prairie-chickens from 2013 to 2016 throughout Beaver County, Oklahoma, to track how the birds used space and moved about in areas with varying amounts of CRP land. Bird movements were evaluated at the individual pasture, county, and distribution-wide scales. Bird locations were gathered from GPS and citizen science (such as the eBird database) and used to determine habitat suitability at both the distribution-wide and county levels, while GPS locations and bird movement patterns (i.e., movements between consecutive locations) were used to assess space-use in relation to CRP land at the county and pasture levels.

The study showed that given the bird’s limited movements, habitat benefits vary according to the spatial arrangement of CRP across the landscape, so a patchwork of CRP, native range, and cropland areas may best provide for the needs of the lesser-prairie chicken. Another encouraging finding is that at the pasture scale, managed grazing of CRP land does not negatively influence the birds’ movements or habitat selection and appears compatible with the conservation objective of providing lesser prairie-chicken habitat.

In many ways, ground-dwelling birds are no different than their counterparts that nest in trees, safely above many predators. Like their high-flying relatives, birds that live on the ground need food, water, and shelter for survival. The Oklahoma State University study shows that CRP can help preserve and restore what the lesser prairie-chicken needs to survive and thrive.

CRP is one of several USDA programs that USDA offers that can help producers manage for prairie chicken habitat. Producers can learn more by contacting their local Service Center.

Signed into law in 1985, CRP is one of the largest private-lands conservation programs in the United States. It was originally intended primarily to control soil erosion and potentially stabilize commodity prices by taking marginal lands out of production. The program has evolved over the years, providing many conservation and economic benefits. The program marks its 35-year anniversary this month.

Bob Sowers is an Information Management Specialist with NRCS in Beltsville, MD. He can be reached at robert.sowers@usda.gov.