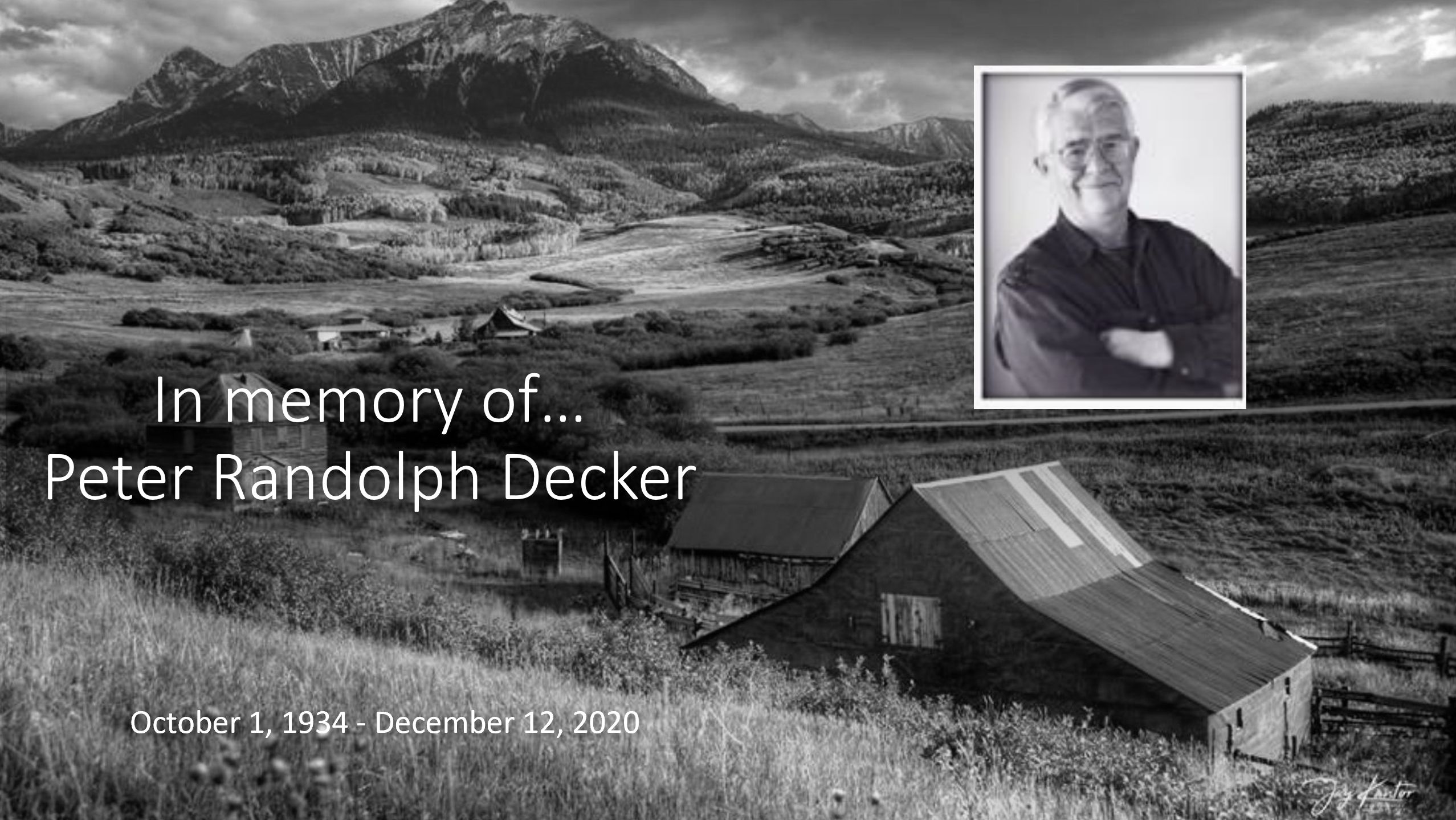 Peter Randolph Decker, 86, educator, soldier, rancher, public servant, scholar, author, and patriarch, died on the morning of December 12, 2020, with his beloved wife Deedee at his side, ending a life well and fully lived.

As a student, teacher, writer and avid reader, Peter cared deeply about education. He often joked, “I’m over educated and barely employed as a rancher.” He attended Choate ’52; Felsted ’53, and Middlebury College (BA) ’57. He earned a Master’s Degree from Syracuse University and his Ph.D. from Columbia University. He taught at the Cate School in Carpinteria, CA and served as Assistant Professor of History and Public Policy at Duke University, during which time he was awarded Fellowships at Yale University and the Rockefeller Foundation. Peter maintained close connections with these educational institutions and the countless colleagues, students, and staff he met and shaped.

Peter’s passion for learning extended beyond the classroom. It wasn’t uncommon to find a Denver water lawyer, an East Coast professor, a log cabin builder, a Senator, and a cowboy around his dinner table on any given night.

Peter also served proudly in the United States Army as a First Lieutenant, part of the “Brave Rifles” of the 3rd Armored Cavalry Division. During his service, he was an advisor to the Royal Laotian Army at the height of the Laotian civil war. Volunteering at Denver’s VA Hospital became an important part of Peter’s later life.

Peter had an early stint in politics and journalism. He worked as a Senior Writer at Congressional Quarterly in Washington, D.C. and later joined the presidential campaign of Senator Robert Kennedy as a policy analyst and speechwriter. As a correspondent for the AP, Peter worked to uncover the Secret War in Laos.

Peter and Deedee fell in love with the west independently, as teenagers. They bought the Double D Ranch in Ridgway, CO in 1974. He and Deedee showed up with no experience, but through hard work, trial and error, and the help of countless friends and neighbors, they became cattle ranchers. Together they established a legacy of community involvement and partnership with local ranchers in Ouray County. The Double D remained Peter’s true home until the end.

Despite his academic credentials, Peter always said he preferred to ride with those who know best the working end of a rope, a shovel, or a quarter horse. He often joked that his Ph.D. stood for “post hole digger,” something he became quite good at. And the locals will tell you he played a mean game of cowboy polo. Along the way, Peter apparently learned a thing or two about ranching, as he was appointed by Governor Romer to be Colorado’s Commissioner of Agriculture in 1987.

Peter was a storyteller – telling a story well was his craft, his life’s work, and one of his greatest sources of joy. His stories, as one dear friend put it, “provided insights into people, their history, their peculiarities, and the human condition.” He authored six published books – three works of history including Old Fences, New Neighbors and The Utes Must Go – and three novels. Peter had a great understanding of the West. He saw it as more than a place. To him the West was a landscape, a lifestyle, a culture and a home. He studied it, wrote about it and above all, cherished it. Indeed, the Double D was one of the first ranches in the area to be put under a conservation easement, to preserve the landscape for future generations.

Civic involvement was important to Peter. He served on the Board of Directors at Middlebury College, Fort Lewis College, and the Federal Reserve Bank, Denver Branch. He was appointed to the Colorado Commission on Higher Education and was a Trustee of the National Western Stock Show. Especially important to him, Peter was a member of the Ouray County Planning Commission where, in the early 80’s, he headed the first land use Master Plan. Peter also supported local ranchers and families around Ridgway for over 45 years through 4-H junior livestock purchases, community and political fundraisers, and helping neighboring ranchers during round up and branding. He could be heard telling his children, “Be a good citizen, be a good neighbor, be a good person. That matters.”

Peter enjoyed the finer things in life: art, literature, travel, wine, food, good company, and Duke basketball. But most of all he loved his family. Peter’s life was admirable not just for striving to improve himself and others, but for his intelligence, his courage, and his capacity for feeling. Peter Decker was a man of agency – he controlled his own destiny, and he would want the story of his life to inspire and empower all of us to live lives as full as his own. He will be missed dearly.

Donations in Peter’s memory can be made to the Colorado Cattlemen’s Agricultural Land Trust or the Rocky Mountain Land Library or to a local cause of your choosing that focuses on education or land preservation.

A memorial will be held at the Double D Ranch in summer 2021.