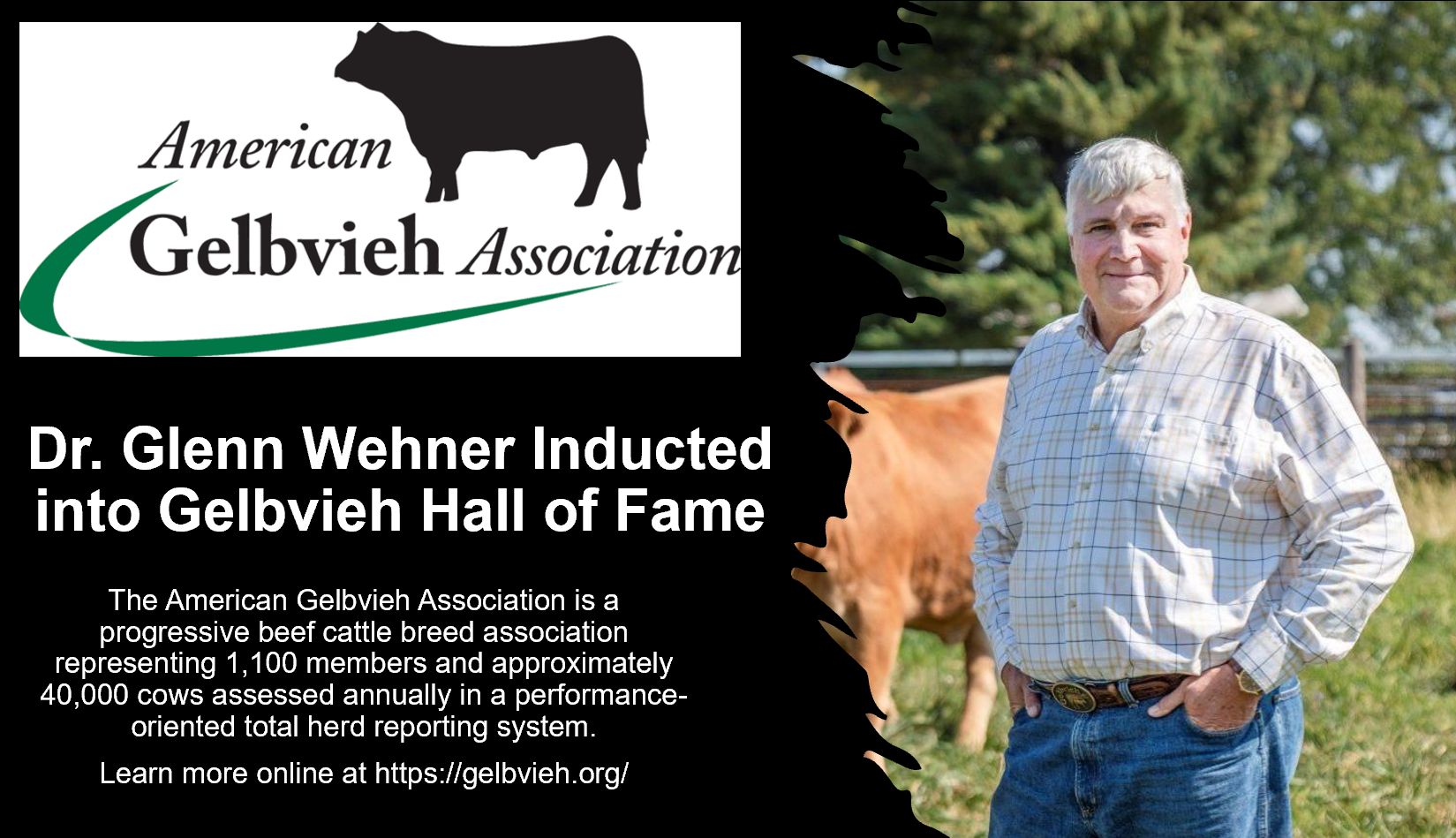 Dr. Glenn Wehner of Rocking GV Gelbvieh in Kirksville, Missouri, was inducted into the American Gelbvieh Association (AGA) Hall of Fame during the awards presentation at the AGA Virtual Annual Meeting on December 4, 2020.

The AGA Hall of Fame recognizes individuals for lasting contributions to the growth and development of the Gelbvieh breed. Hall of Fame inductee selection requirements include contributions to breed promotion efforts, leadership provided to the association, and the breeding of superior genetics that are of great influence within the Gelbvieh and Balancer® cattle population.

“We bred purebreds at the time, at the university, and I wanted to stay with purebreds,” said Wehner. “A purebred operation is obviously different than a commercial, but you can teach all the commercial aspects with a purebred herd, so it seemed like a good fit for the university. When I put in my own herd, I decided we would go with fullbloods so that’s where we are today.”

Dr. Wehner has seen many positive changes within the breed over the years and has been influential in reducing mature cow size in Gelbvieh cattle.

“We’ve seen a lot of positive changes. We’ve stayed on top of the mothering ability, early fertility, pounds of calf weaned per cow exposed, longevity, and those things that definitely have an impact on the bottom line of an operation,” said Wehner.”

Along with his wealth of knowledge of the Gelbvieh breed, Dr. Wehner has been involved in many ways with the AGA and the American Gelbvieh Foundation (AGF) over the years. He has been a promoter of the fullblood Gelbvieh herd book, served on numerous committees and currently serves on the AGF board of directors as treasurer. With his involvement in the AGF executive committee, he has played an instrumental role in developing the AGA’s 50-year history book.

“I think it’s one of those things that gives us the history of the breed in Germany and all the way up to our present time,” said Wehner. “I think some of the positive changes we’ve seen are going to be very accepted and highlighted in that book.”

Willing to knowledgeably discuss the breed with anyone, Dr. Wehner continues to be an avid proponent of Gelbvieh cattle today, and still teaches a few classes at Truman State University. The endeavors and contributions of Dr. Wehner have not only improved the breed, but the association, as a whole.

“I am profoundly humbled by this nomination,” said Wehner. “When I looked at the line of people ahead of me with this honor, and thought about their contributions, it’s just surreal to be included in that line.”