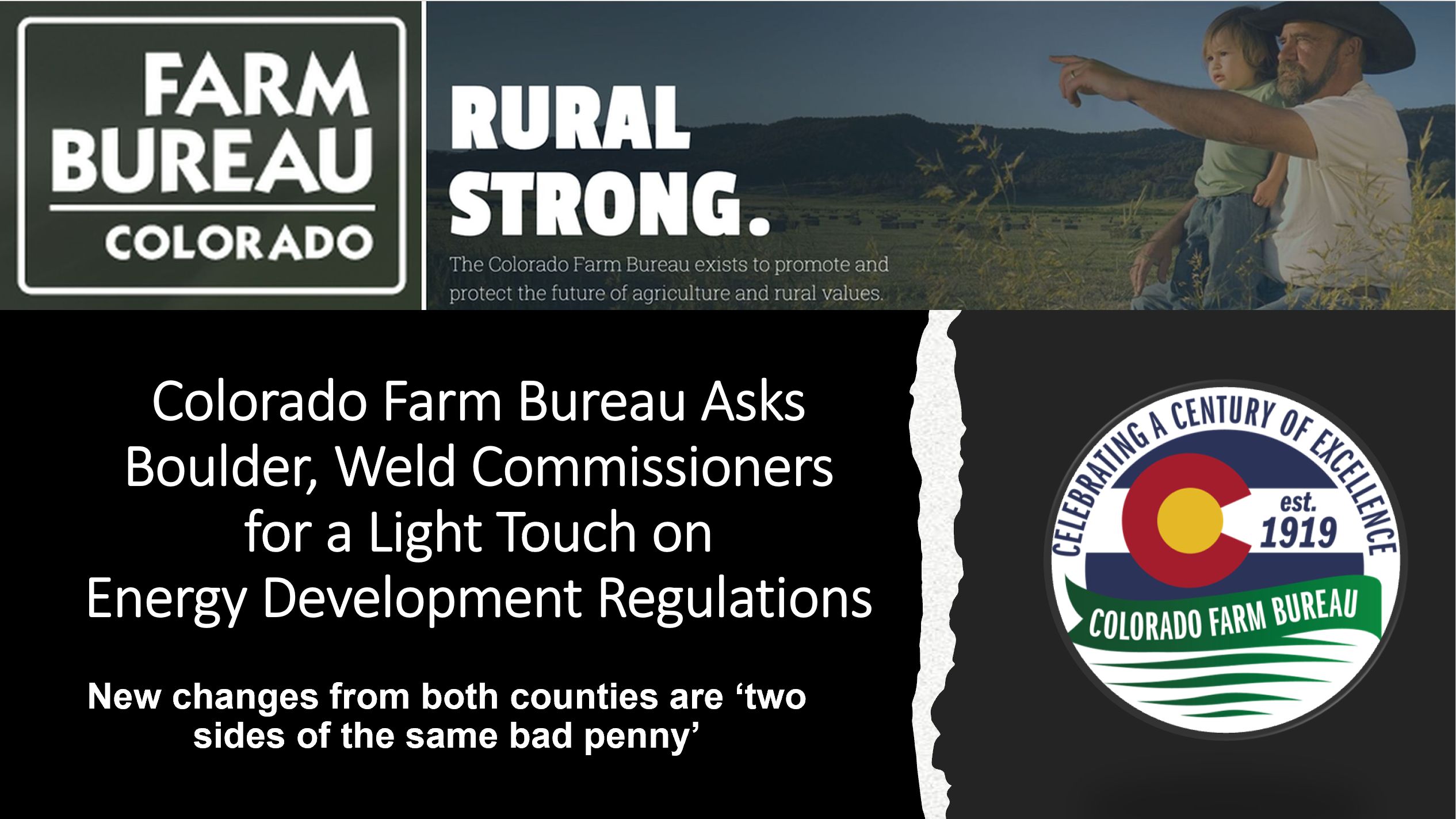 The state’s largest farm and ranch organization is asking commissioners in Boulder and Weld counties to take a lighter touch on energy regulations to protect farm profitability and respect property rights. In a letter sent to commissioners yesterday, Colorado Farm Bureau president Carlyle Currier, a fifth-generation rancher from Molina wrote that in Colorado, many farmers and ranchers use their land to produce both food and energy, often to ensure profitability.

“That energy takes many forms, from traditional oil and natural gas to renewable sources like solar, wind and biofuels. In either case, farmers and ranchers may best ensure the success of their agricultural enterprise by diversifying into energy production as well,” he wrote.

Boulder County recently passed new provisions that significantly limit the ability of landowners to develop their property for oil and gas production. In Weld County, commissioners are considering rules that would nearly eliminate all but the smallest solar electricity generation facilities. Currier contends that both proposals lack respect for property rights and unnecessarily limit the ability of farmers and ranchers to use their property to generate additional income in the face of COVID-related economic distress.

“The proposals are really two sides of the same bad penny,” said Currier in a call with members. “It’s interesting to me that such similar policies are being advanced by such politically opposite counties. This is really untimely, when farm and ranch bankruptcies are at record highs and producers are worried about keeping the farm and ranch in the family.”

In the letter, Currier continued to push that point, “By singling out different forms of energy production for arbitrary regulation and restriction, your policies, at a minimum, serve only to cause economic harm to a particular sector. Caught in the middle are farmers and ranchers, deprived of both financial gains during a time of significant economic stress and their unalienable rights as property owners,” he wrote.

Many farms and ranches in Colorado play host to both traditional and renewable energy development in addition to the production of food. In Weld County alone, thousands of acres of farm and ranchland are used to grow crops, raise cattle, generate electricity from wind and solar, and develop transportation fuel from oil and natural gas. Currier writes that Colorado is one of only a few states where this kind of dynamic agricultural and energy production occur alongside one another and in relative harmony.

“We urge you to put aside grievances and allow farmers, ranchers, landowners and energy producers to work cooperatively to provide the sustainable energy production, financial security, economic growth, environmental protection, and job creation that has led Colorado to be a national leader in these very areas.”