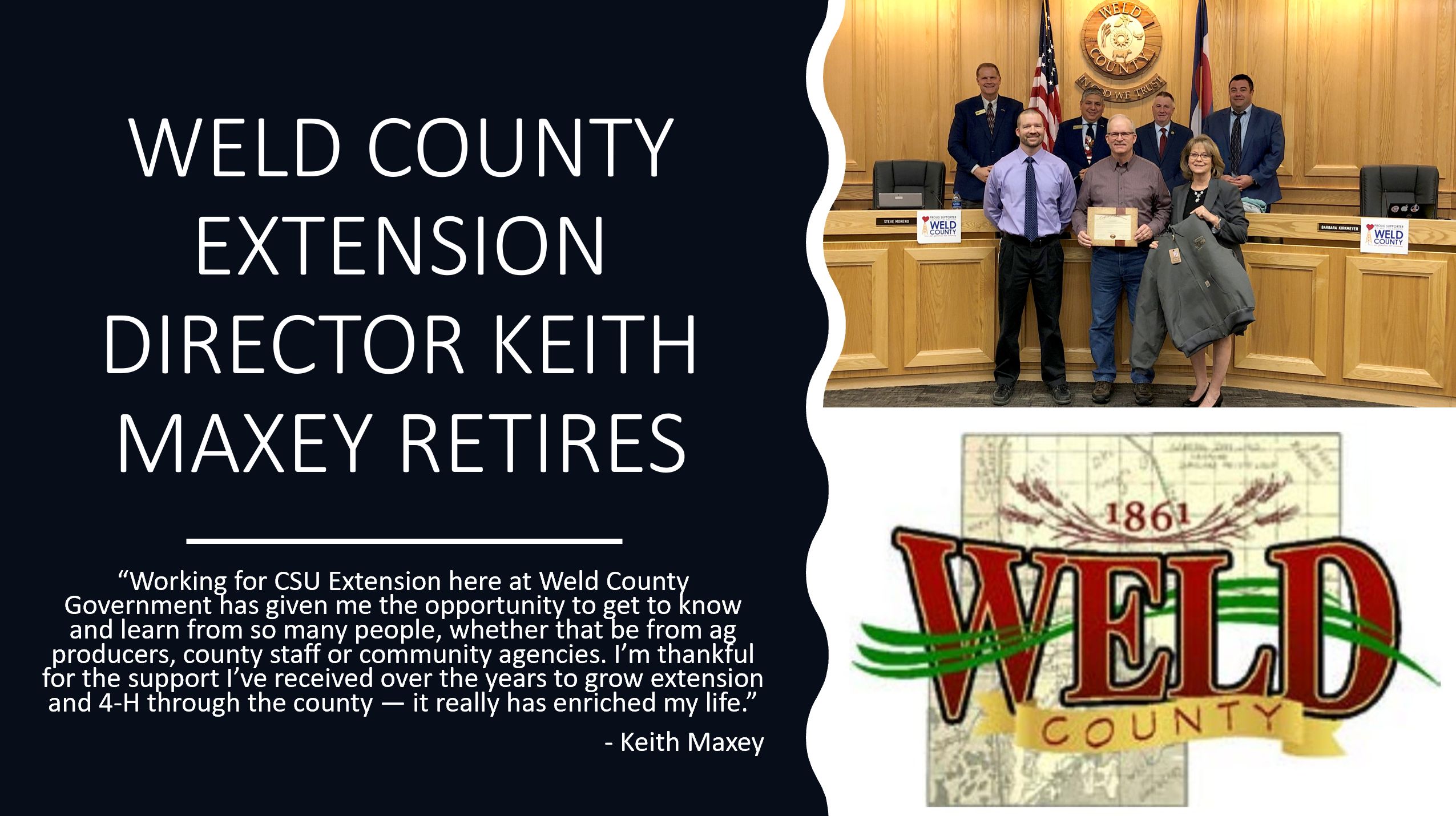 Maxey began his career on December 18, 1995, as a Dairy Agent where he focused on programming for dairy cattle and goat producers and 4-H Club members. He also became a Livestock Agent, broadening his programming scope to include beef cattle, sheep and goats. His love for dairy cattle and livestock in general spurred him to start both the Dairy Extravaganza and Goat Extravaganza in 2000 where youth can practice showing their dairy cattle and goats ahead of the Weld County Fair livestock shows. At that same time, Maxey led a Kids for Kids goat program, where youth from underrepresented populations took care of goats and learned how to raise them to produce quality meat. The program, which ran for eight years, expanded 4-H’s reach in Weld County and won Maxey a National Program of Excellence Award from the National 4-H Association.

On June 1, 2011, he was promoted to director of the Extension Office. As director, Maxey oversaw staff administration of several Extension areas including the Weld County Fair, family and consumer sciences, livestock, horticulture, agriculture and youth programs. In addition, he took on 4-H and adult programming responsibilities including farm visits and assisting producers in adopting new technologies, such as decision tools, predictive models and integrated whole farm systems, as well as identifying problem areas limiting long-term productivity. He was also a coach for the Colorado 4-H Dairy Judging Team and helped lead them to judge at the International Dairy Judging Tour in Scotland and Ireland during the summer of 2019.

“I was on the interview committee that hired Keith as Extension Director,” said Commissioner Chair Mike Freeman. “I’m more than honored to have been able to work with you over the years. You’ve done a great job.”

Maxey’s dedication to agriculture and ag education has extended outside of his career as he’s worked with the Weld County 4-H Foundation since 1995 and has been the Dairy Cattle Superintendent at the Colorado State Fair since 1996. For the past few years, Maxey has served on the Colorado Farm Show Board where he helped with educational and scholarship programs.

“We’re going to miss you,” said Commissioner and Extension Office Coordinator Barbara Kirkmeyer, mentioning how Maxey’s calm leadership was an asset to Extension over two decades. “We’ve really enjoyed having Keith here, and I believe he is the best Extension Director in the state of Colorado.”

“Working for CSU Extension here at Weld County Government has given me the opportunity to get to know and learn from so many people, whether that be from ag producers, county staff or community agencies,” Maxey stated. “I’m thankful for the support I’ve received over the years to grow extension and 4-H through the county — it really has enriched my life.”

Written and submitted to The BARN by: