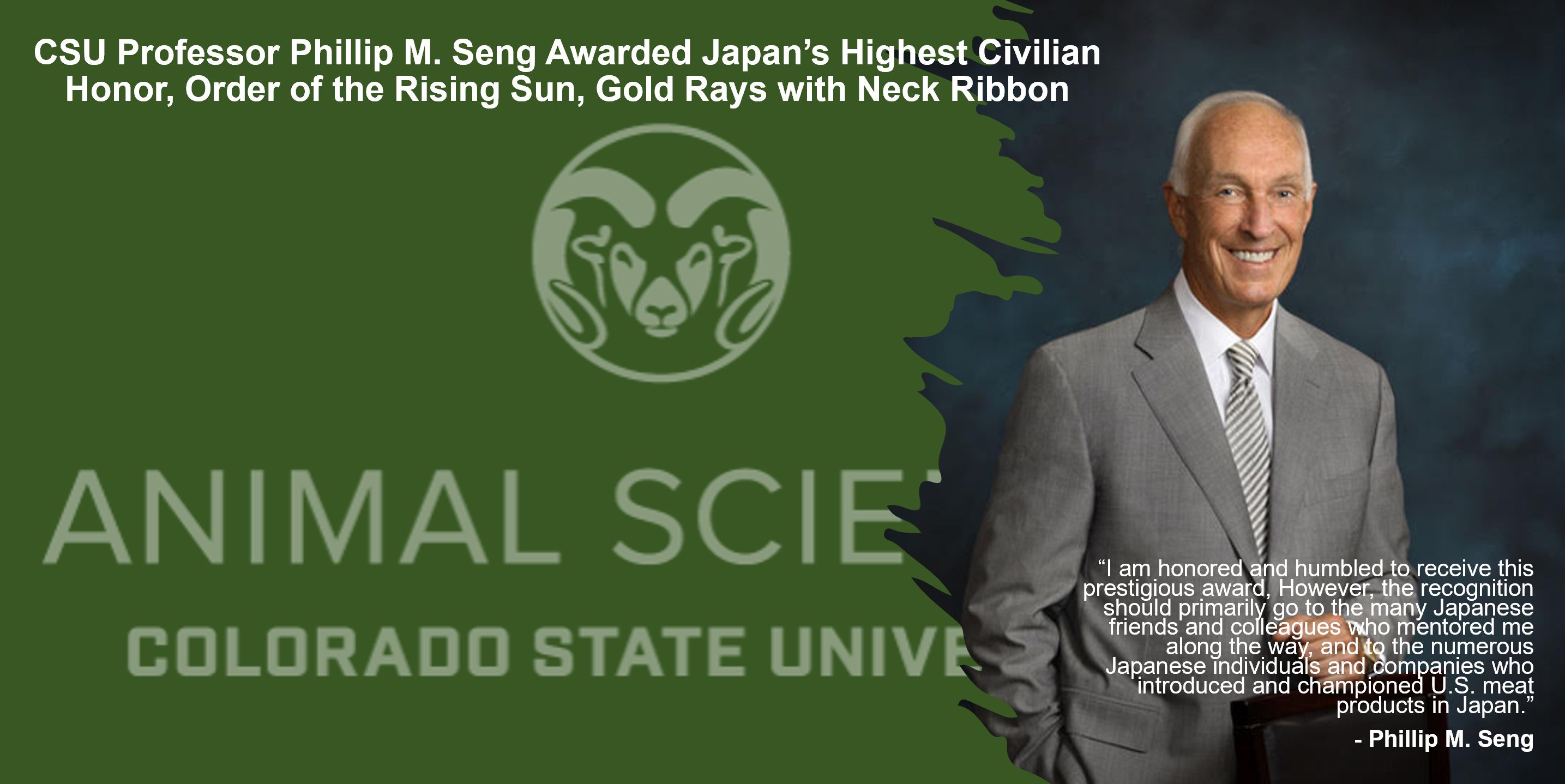 Ft. Collins, Colo., December 3, 2020 – CSU Affiliate Professor, Philip M. Seng, has been awarded Japan’s highest civilian honor, the Order of the Rising Sun, Gold Rays with Neck Ribbon. The Japanese Government announced the conferral of award to Mr. Seng on November 3, 2020. The Order of the Rising Sun (旭日章, Kyokujitsu-shō) is a Japanese order, established in 1875 by Emperor Meiji. The Order was the first national decoration awarded by the Japanese government, created in 1875. The order is awarded to those who have made distinguished achievements in international relations, promotion of Japanese culture, advancements in their field, development in welfare, or preservation of the environment. This is the third highest order bestowed by the Japanese government and the highest ordinarily conferred order.

Seng was awarded this distinction for his significant contributions toward the development of trade and the promotion of mutual understanding between Japan and the United States during his 36-year tenure as Asian Director and President & CEO of the United States Meat Export Federation (USMEF). The award also cited Seng’s contributions as President of the International Meat Secretariat and President of the Japan America Society of Colorado. Seng is currently an Affiliate Professor in CSU’s Animal Science Department where he teaches an international meat business class and participates in many export-focused research projects. Additionally, Seng participates on M.S. and Ph.D. graduate committees within the department. While Seng was at USMEF, he funded several beef and pork research projects with an international marketing focus at CSU. Keith Belk, Department Head of Animal Science, stated that “we congratulate Phil on receipt of this award which is an outstanding achievement. It is a great privilege to have Phil associated with our Department and for him to teach our undergraduate and graduate students things that are not available elsewhere. Our heartiest congratulations to him for this outstanding honor!”

“I am honored and humbled to receive this prestigious award,” Seng stated. “However, the recognition should primarily go to the many Japanese friends and colleagues who mentored me along the way, and to the numerous Japanese individuals and companies who introduced and championed U.S. meat products in Japan.”

Seng is credited to a large extent for the key role he played in opening the Japanese market to U.S. red meat products. In 1982, when Seng assumed his role at USMEF, U.S./Japan trade relations were tense and acrimonious. The trade balance heavily favored Japan, which was viewed as an impregnably closed market. Seng’s leadership was integral in fostering relationships and policy changes that ultimately led to greater market access for and receptivity to U.S. red meat products. With a commitment to intensified customer contact, which also included advertising and promotional campaigns conducted jointly with Japanese companies, Japan’s trade and consumers increasingly began to accept U.S. beef and pork.

“My strategy was to approach the market respectfully, with the perspectives of the Japanese trade and consumers paramount,” explained Seng. “In this way, we were able to jointly satisfy customer demands and develop everlasting trade relationships that benefitted both the U.S. and Japan. These trade relationships were formalized into a strategic partnering initiative.” The business relationships developed during his tenure remain cemented today. In just over 30 years, Japan has imported over $50 Billion in U.S. beef and $40 Billion in U.S. pork.

“I hope to continue promoting understanding and relationship-building between the United States and Japan,” said Seng. “I am reminded of a quote from U.S. Ambassador Michael Mansfield, who said the U.S./Japan relationship is the most important relationship, bar none. This was true in the 1980’s and I believe it remains true today.”