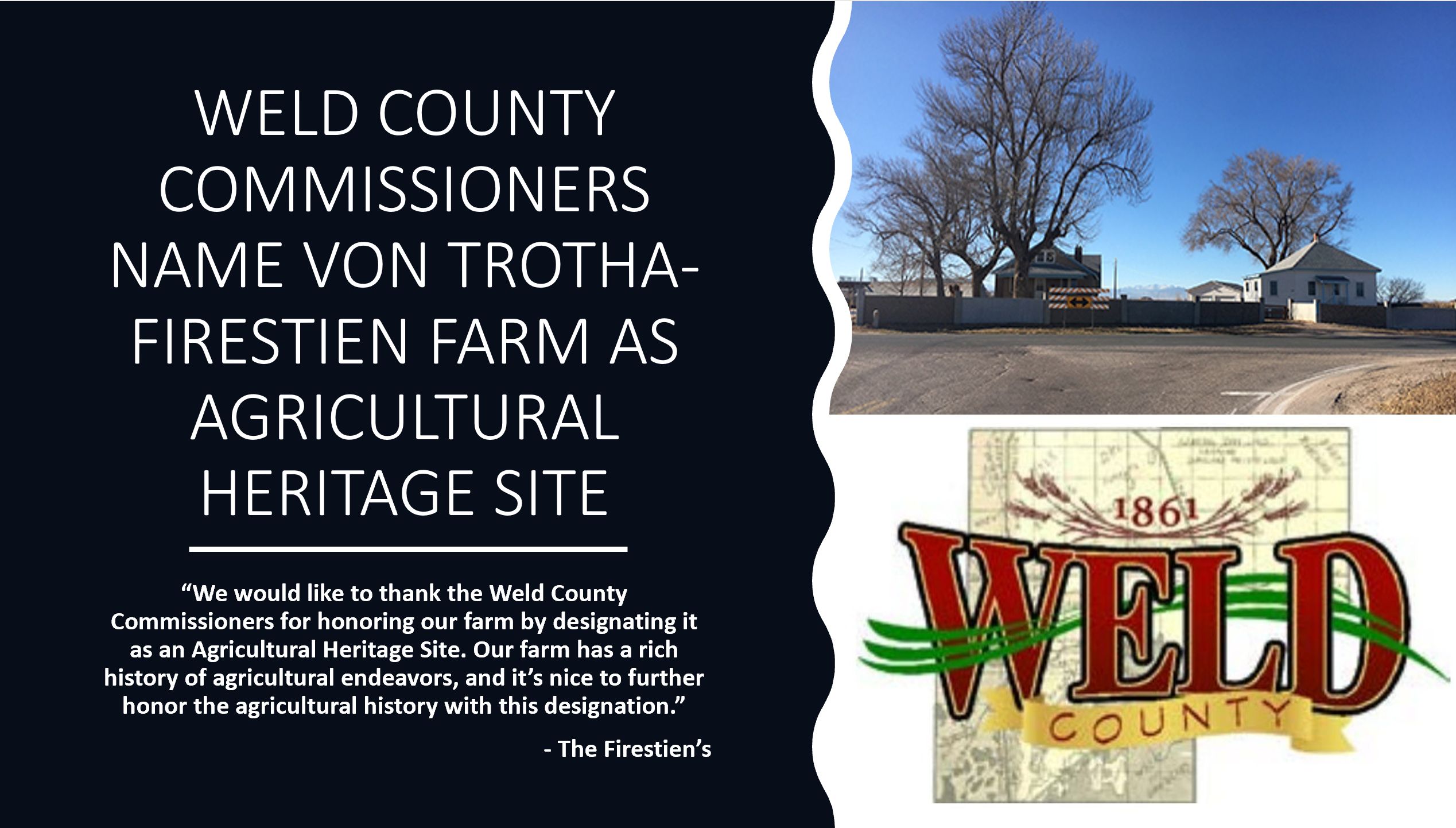 WELD COUNTY, CO — On Monday, the Weld County Board of Commissioners formally designated the Von Trotha-Firestien Farm as an Agricultural Heritage Site. The farm is the first to receive the designation since the board approved Agriculture Heritage Sites as part of Chapter 23 zoning changes on November 16.

“This designation of the Von Trotha-Firestien Farm as an Agricultural Heritage Site is a testament to its impact and legacy in Weld County,” said Commissioner Chair Mike Freeman. “Today’s resolution extends protections for the Von Trotha-Firestien Farm against future development, which preserves its value to the agricultural landscape of the county.”

On May 12, 2009, the Von Trotha-Firestien Farm was registered as one of the historic farms and ranches of Weld County on the National Register of Historic Places by the United States Department of the Interior. It was identified as such for its long association, beginning at the turn of the 20th century, with irrigated farming and livestock feeding on 49 acres in Weld County. Over the farm’s 109 years in operation, more than 93 years were directly associated with the Von Trotha and Firestien families. The farm helped Greeley and Weld County develop technologically and economically thanks to irrigation and sugar beet cultivation as well as recycling building materials for use elsewhere. A perfect example of this is when the Von Trotha family dismantled three clay tile brick silos from other properties they owned to utilize the brick for construction of the farmhouse.

Ruth and Judy Firestien, who couldn’t attend the board meeting, asked Commissioner Scott James to read a statement from their family.

“We would like to thank the Weld County Commissioners for honoring our farm by designating it as an Agricultural Heritage Site,” Commissioner James said, reading an email from the Firestien’s. “Our farm has a rich history of agricultural endeavors, and it’s nice to further honor the agricultural history with this designation.”

View Chapter 23 of the Weld County Code at https://library.municode.com/co/weld_county/codes/charter_and_county_code?nodeId=CH23ZO.

Submitted to The BARN by: