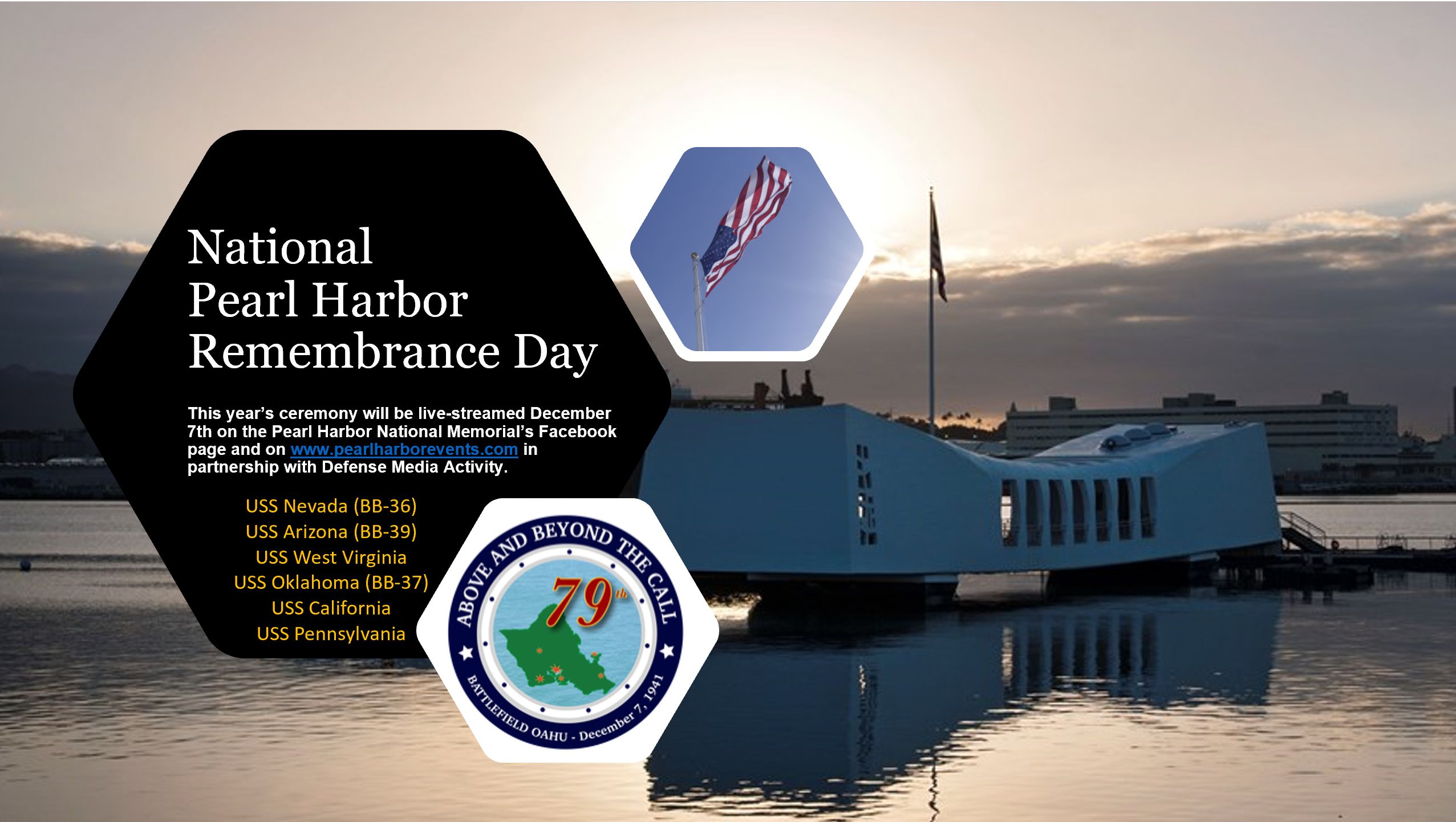 Each year on Dec. 7, Pearl Harbor Survivors, veterans, and visitors from all over the world come together to honor and remember the 2,403 service members and civilians who were killed during the Japanese attack on Pearl Harbor on December 7, 1941. A further 1,178 people were injured in the attack, which permanently sank two U.S. Navy battleships (the USS Arizona and the USS Utah) and destroyed 188 aircraft.

On Aug. 23, 1994, the United States Congress designated Dec. 7 as National Pearl Harbor Remembrance Day. Every year, remembrance events are held at the Pearl Harbor National Memorial, culminating in a commemoration ceremony on Dec. 7. To see photos of these events, please go to our Flickr page. To see videos of these events, please visit our YouTube page.

This years Pearl Harbor Day Commemoration’s theme, Above and Beyond the Call, represents a milestone of its own, as the first December 7 commemoration to follow the nationwide commemoration of the 75th anniversary of the end of WWII. This year’s ceremony will focus on Battlefield O`ahu. Though the Japanese Empire focused on the destruction of the Pacific Fleet in Pearl Harbor, the attack encompassed the entire island with assaults on Army and Marine aviation bases as well as civilian facilities.

The experiences of the soldiers, Marines, Coast Guardsmen and sailors defending O`ahu, as well as the civilians caught in the crossfire, would exemplify courage under fire and perseverance. Their spirit at the beginning of the long crucible of war would frame the template for the securing of victory and peace.

This years event will will be held on December 7th at the Pearl Harbor Visitor Center and will encompass the service and sacrifice traditionally commemorated in multiple ceremonies and sites the week of December 7th. In order to protect our Pearl Harbor Survivors and World War II Veterans in attendance this years ceremony will be closed to the public. This event will be live streamed for public viewing via our Facebook page and http://www.pearlharborevents.com. The Pearl Harbor Visitor Center will reopen to the public for visitation on December 7th at 11:30 am, with USS Arizona Memorial Programs resuming and running every 30 minutes from 12 noon – 3 pm. Advance reservations will be required from December 5th – December 7th.

Due to COVID-19, this year’s ceremony at Pearl Harbor National Memorial will be broadcast live so that you can join the anniversary commemoration remotely. The broadcast will feature a number of wreath laying ceremonies at military installations around Oahu that were attacked on December 7, 1941.

The park will not be open to the public during the morning virtual ceremony, but will be open after the ceremony.

Above and Beyond The Call: Battlefield Oʻahu

Check out the official website commemorating the National Pearl Harbor Remembrance day and the 79th anniversary of the attack on the island of Oʻahu.