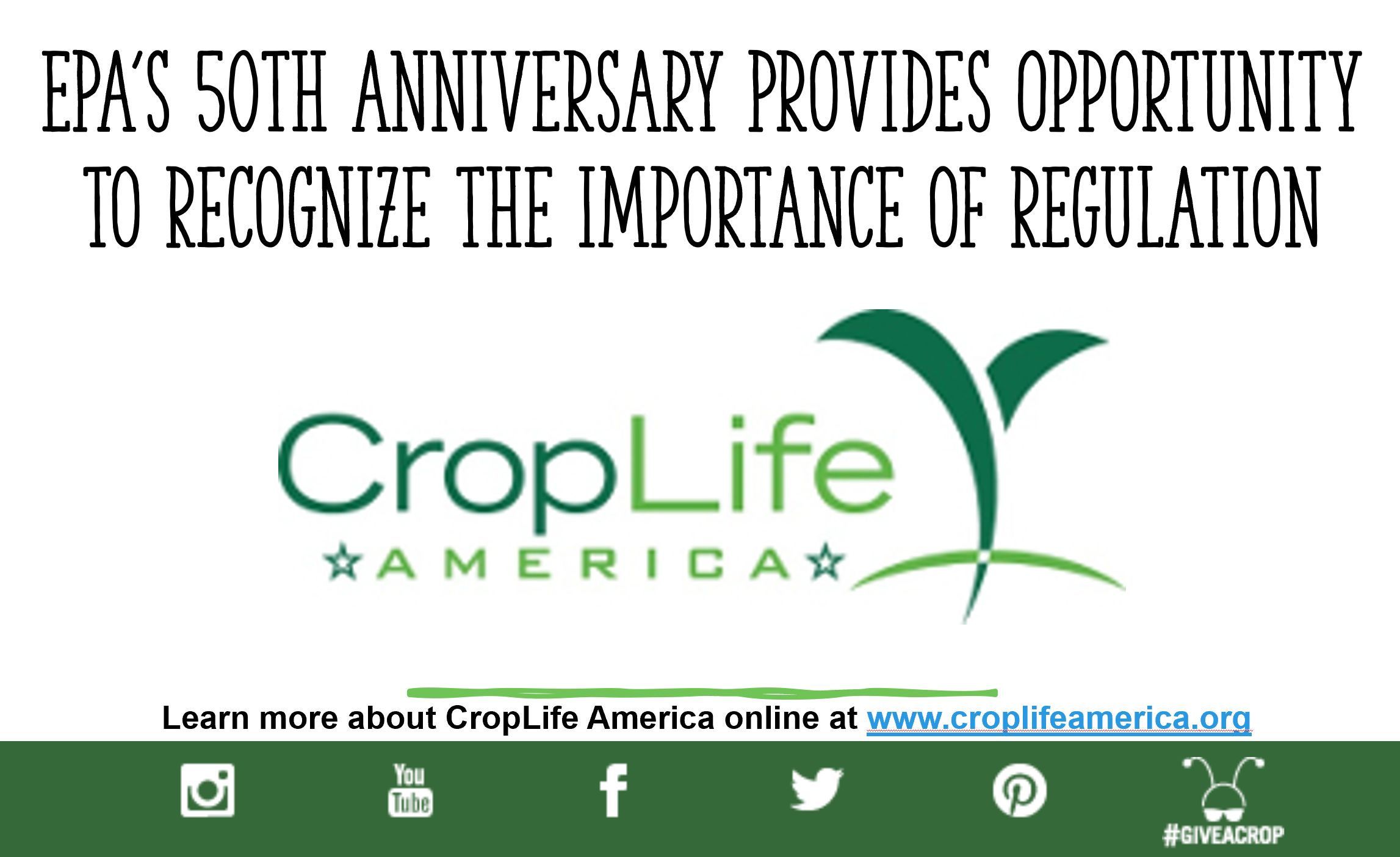 WASHINGTON, D.C. – The U.S. Environmental Protection Agency (EPA) turned 50 today, marking years of continuous environmental improvement across our nation’s land, water, and skies. CropLife America (CLA) congratulates the Agency on its 50th anniversary and commends its career scientists, who serve our nation with a mission to protect human health and the environment by enacting the regulatory initiatives that protect our world.

Founded in 1970 by President Richard Nixon, EPA was created following growing public concerns about city air, litter, water quality, and environmental pollution. His plan consolidated many environmental responsibilities of the federal government, such as research, monitoring, and standard-setting, into one agency charged with achieving the goals of an extensive environmental plan.

Since its creation, EPA is the agency that requires all pesticides be thoroughly reviewed and regulated before they’re approved for use. When farmers, pest control companies, landscapers, or consumers need new tools to protect their homes, crops, and health, it is the EPA that reviews almost 10 years of research data to ensure these products are safe and effective. Working in cooperation with state regulatory bodies, the EPA helps ensure farmers can grow crops and communities can control dangerous pests while protecting the environment and the health of the American people.

“We congratulate EPA on 50 years of helping to ensure the health and safety of our nation.,” said Chris Novak, president and CEO of CLA. “The agency’s reliance on sound science and its ability to balance risks and benefits are critical elements of a regulatory system that remains a shining example of the importance of science over politics in today’s increasingly polarized society. We appreciate the dedication of the EPA’s career scientists and will continue to support full funding of the agency.”

EPA’s strict regulatory process is the reason why only one in 10,000 pesticide discoveries makes its way from the lab to the farmers’ field. The work of EPA’s career scientific experts underpins this process, regardless of Administration, and helps ensure that pesticides are safe for human health and the environment before they can be sold.

Established in 1933, CropLife America (www.croplifeamerica.org) represents the developers, manufacturers, formulators and distributors of plant science solutions for agriculture and pest management in the United States. CropLife America’s member companies produce, sell and distribute virtually all of the necessary and vital crop protection and biotechnology products used by American farmers. CLA can be found on Twitter at @CropLifeAmerica.