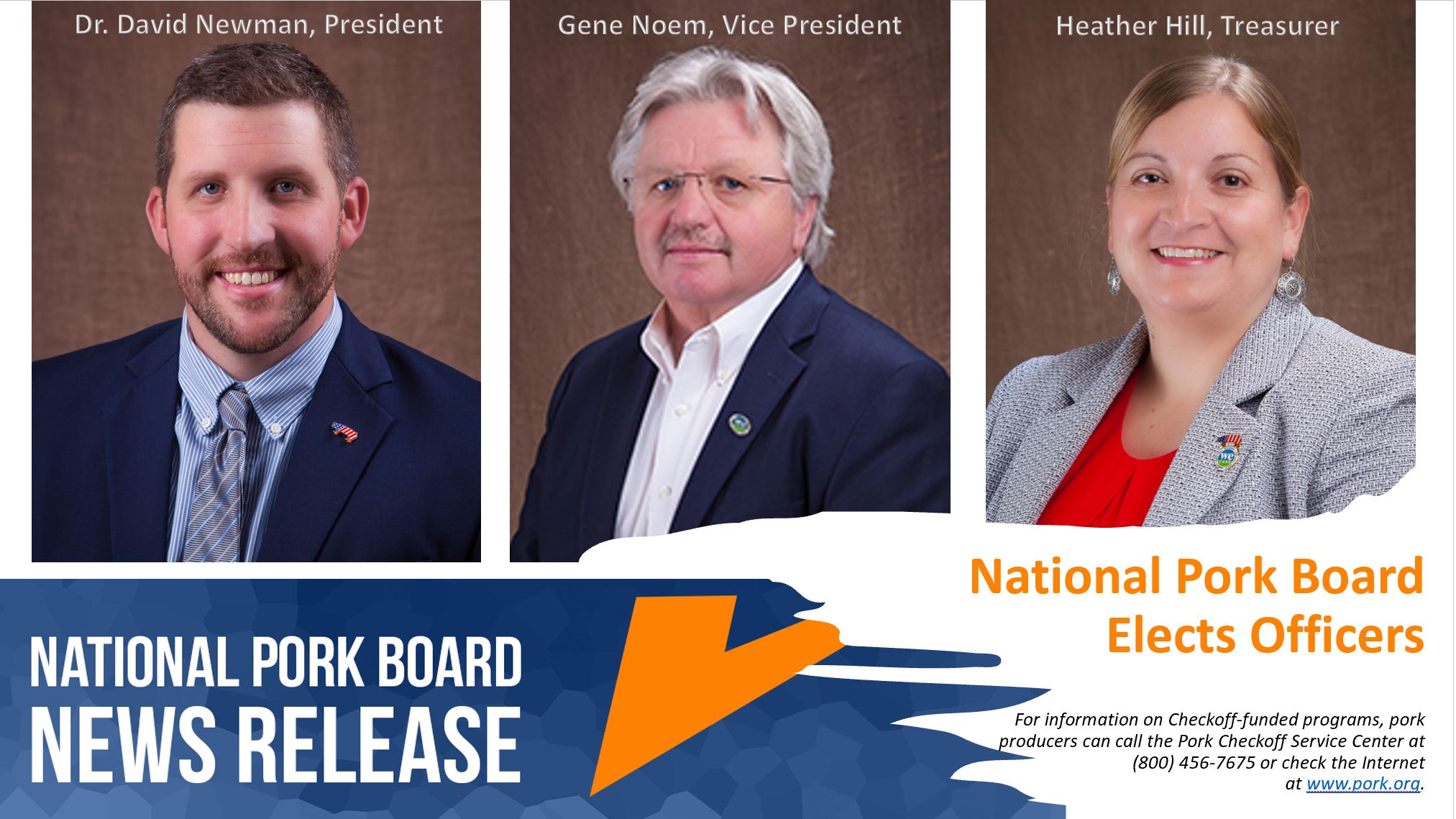 David Newman elected to serve a second term as Board president

DES MOINES, IOWA – Nov. 13, 2020 – David Newman, a pork producer representing Arkansas, was elected to serve a second term as president of the National Pork Board at the organization’s November board meeting earlier this week. The National Pork Board’s 15 producer directors represent America’s 60,000 pig farmers, who pay into the Pork Checkoff – a program that funds research, promotion and education efforts benefiting the industry.

“Like everyone, U.S. pig farmers have faced significant challenges this year,” Newman said. “Supply chain disruptions caused by COVID-19 and the real threat of African swine fever have made this one of the most difficult years to be a pig farmer. But it has also shown us how resilient and agile our industry and the Pork Checkoff are in the face of adversity.”

Despite the numerous challenges the pork industry has faced, Newman is optimistic about the opportunities ahead.

“I am excited to be able to lead the Pork Checkoff for a second term as we implement key learnings from the past year, continue to build on retail sales growth for pork seen during the pandemic and show consumers the values of the pork industry from farm to fork through our Real Pork master brand,” said Newman, who owns and operates a farrow-to-finish Berkshire farm that markets pork directly to consumers and food service operators.

Rounding out the Pork Board’s executive officer team are Vice President Gene Noem, from Ames, Iowa, and Treasurer Heather Hill, from Greenfield, Indiana. Both are serving their second of a three-year term on the board.

Other producers appointed by U.S. Secretary of Agriculture Sonny Perdue and signed in this week to serve second terms on the Pork Board include: Scott Phillips, Drexel, Missouri; Deb Ballance, Fremont, North Carolina; and Todd Erickson, Northwood, North Dakota. Al Wulfekuhle, from Quasqueton, Iowa, was appointed to serve his first term.

Additional biographical information
Dr. David Newman, President – Newman is in his second term as a board member and owns and operates a farrow-to-finish Berkshire farm in Myrtle, Missouri, that markets pork directly to consumers throughout the U.S. David is also an associate professor of Animal Sciences at Arkansas State University where he teaches and conducts research, with an emphasis in meat science. He most recently served as board president, on the 2020 Strategic Planning Task Force, and on the Swine Health committee. He previously chaired the Domestic Marketing committee, served on the Producer Services committee and participated in Pork Leadership Academy.

Gene Noem, Vice President – Noem finishes hogs at JMG Farms in Howard County. Gene also manages the contracted gilt multiplication for PIC North America. He is in his second term on the board, most recently serving on the 2020 Strategic Planning Task Force and co-chairing the joint We CareSM Task Force with the National Pork Producers Council. Gene also serves on the Iowa Pork Producers Association board of directors and on its Promotions Committee.

Heather Hill, Treasurer – Hill is co-owner of Hill Farms in Greenfield, Indiana, a 600-sow farrow-to-finish operation, with her husband Marc and his parents. Hill Farms also grows corn, soybeans and wheat. Heather is a former president of the Indiana Pork Board and has been actively involved since 2009. She also serves on the National FFA Career Development Sales Committee and is a leader for the local 4-H chapter. Heather is an Operation Main Street speaker. The National Pork Board has responsibility for Checkoff-funded research, promotion and consumer information projects and for communicating with pork producers and the public. Through a legislative national Pork Checkoff, pork producers invest $0.40 for each $100 value of hogs sold. Importers of pork products contribute a like amount, based on a formula. The Pork Checkoff funds national and state programs in advertising, consumer information, retail and foodservice marketing, export market promotion, production improvement, science and technology, swine health, pork safety and sustainability and environmental management. For information on Checkoff-funded programs, pork producers can call the Pork Checkoff Service Center at (800) 456-7675 or check the Internet at www.pork.org.